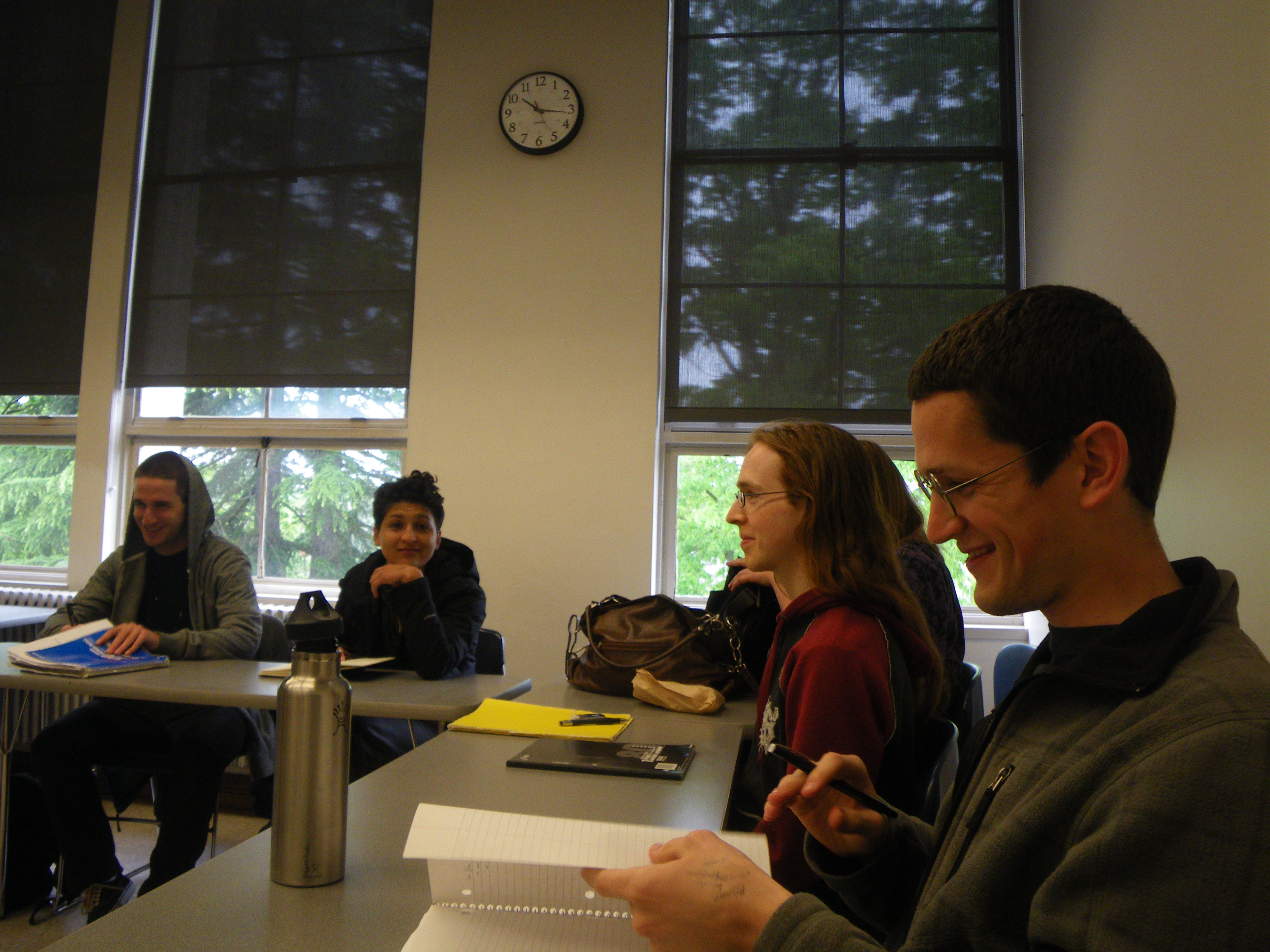 (Editor’s note: This spring, a group of Seattle University seniors embarked on a high-intensity exploration of engaged Buddhism, culminating in creation of a Buddhist “field guide.” This is their story, told by student Jack Hamrick.)

For college seniors, the final term of the final year typically means nice weather and, should you be so fortunate, an easy course load to match. In other words, plenty of opportunity to coast to the end and enjoy the final weeks of that sweet collegiate freedom before “reality” hits after graduation.

But this wasn’t the case for me and the nine other seniors enrolled in Professor Sharon Suh’s “Engaged Buddhism” course. From the start it was clear: “You will not be coasting to graduation.”

Whatever our expectations as seniors, however, I found that our instincts as students kicked in quickly, ready to respond to the challenge. And challenge it was. 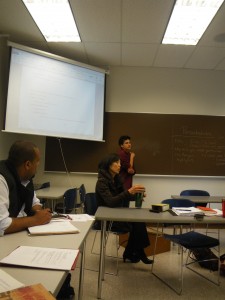 Mapping out the public presentation of the field guide. From left to right Alemayehu Bahta, Prof. Sharon Suh, and Caity Orellana.

Just a cursory glance at the detailed course syllabus left one feeling a little dizzy, because it contained more themes than it seemed even an academic year could contain: Buddhist practice and ministry in prisons, the historical roots of engaged Buddhism, issues of race in Buddhist practice, Thich Nhat Hahn’s Order of Interbeing, and Bernie Glassman’s Zen Peacemakers, among a host of other issues (female ordination, gender, the Tibetan liberation movement) that we simply didn’t have time to explore.

The course was intended to focus on Buddhism in relation to social justice movements, working toward giving voice to what Suh called “the tradition’s vital political, social, and economic dimensions.” In many ways, the course was guided by the question of how Buddhist philosophy and practice compel work on behalf of the “common good,” particularly in light of the incredible amount of large-scale, communal suffering in the world today.

How can we respond, from a Buddhist perspective, to what Suh calls “matters of critical importance,” the persistence of racial injustice, continued gender discrimination, and economic inequity and classism? And, taking on a broader scope, in what ways do the vital traditions of Buddhism engage with suffering in the era of globalization?

For Suh, this course on socially engaged Buddhism grew from her “long-standing commitment to explore and examine the concrete ways that Buddhists throughout time and place have engaged in, with, and through this very world to transform suffering.”

The course was very much focused on deconstructing the popular images of Buddhism as a spirituality of transcendence, and detachment from society and its ills. This is a function of Suh’s own research interests and also of the atmosphere and ethos of Seattle University, a Jesuit university emphasizing social justice.

“Teaching Buddhism at Seattle University naturally grounds Buddhist studies in the work of social transformation,” Suh said, “rather than in the standard projects of textual translation of Buddhist texts that have advanced the hierarchy of textual studies over the economic, the racial, the social, and the political.” 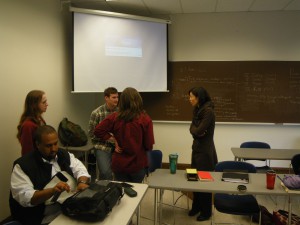 The course was therefore no academic exercise. It demanded us to explore these issues on our own terms, with the end goal of putting forward our collective vision of what socially engaged Buddhism is and does.

At first, this appeared an incredibly difficult task. A primary challenge seemed to be the diversity of disciplines we represented as students, none of which were particularly steeped in Buddhism. The 10 of us included a few theology majors, two philosophy majors (myself included), one in creative writing, one in Asian studies, one in international studies, a women’s studies major, and lastly, a physics major.

Moreover, although a few in the class have participated in Buddhist practice (e.g., a handful of us, including me, sit with the EcoSangha at Seattle University, which practices zazen in the style of the Soto Zen tradition), it’s fair and accurate to say that none of us felt very knowledgeable about Buddhism. My colleague Sean Abel expressed this sentiment best, saying, “I felt under-qualified or under-educated in Buddhism,” a feeling most of us shared.

So we felt a bit overwhelmed as the quarter progressed and the final project took center stage: Our group would design, produce, and choose content for a “field guide” in socially engaged Buddhism.

Each of us would select a particular topic – for example, a particular Buddhist social movement, a specific social problem examined through the lens of Buddhism, or an engaged Buddhist figure – which we would then develop into an in-depth paper exploring this issue. Finally, we would compile these papers into one document, our field guide to socially engaged Buddhism.

Factor in a demanding reading schedule, the fact that many of us had committed time to other classes, plus our unfamiliarity with the topic…Most of us felt cast out to sea, with no port in sight.

What became apparent, as we delved deeper and deeper into this work, was that actually that our perceived deficiencies and weaknesses proved to be our greatest assets.

It is my own belief that it was precisely because we for all intents and purposes knew nothing, that we were able to immerse ourselves and come out of the process with such unique perspectives. This was as much a testament to our “ignorance” as it was to our hard work, initiative, and our incomparable group dynamics. The infamous senioritis, however much it may have tempted us, never infected our ranks.

These results are also a function of the nature of the subject. As the Buddha himself emphasized, Buddhism is about non-attachment to views, about experimenting with these “skillful means” of transforming suffering, and about casting them aside when they are no longer useful. The hands-on, students-at-the-helm approach of the course allowed this teaching to guide and inform our work, forcing each one of us to enter into the Buddha’s teachings and apply them within the localized context of a specific social problem.

We drew together an interesting and varied mix of topics pertaining to socially engaged Buddhism, from the more abstract and philosophical issues – such as Buddhist social ethics – to the more concrete topics of Buddhism and political protest, Buddhist youth education, and interreligious dialogue between Buddhism and Christian liberation theology, among several others. And it was not just a varied sampling that we produced: Something deep and meaningful was said about each of the topics addressed. For all the anxiety and self-doubt we experienced going into the field guide process, by its conclusion I think we were all pleasantly surprised (and relieved) at how well it turned out.

We did not arrive at a one-sentence sort of definition of socially engaged Buddhism, which at any rate wasn’t the goal of the course. What we did produce was a coherent but diverse and open-ended work, compiled of case studies of particular Buddhist movements, philosophical grapplings with traditional Buddhist teachings and their social implications, and some gestures toward the future of a Buddhism engaging and transforming suffering on the communal and societal level.

Our hope is that our work together invites further reflection not only upon the issues we’ve addressed, but upon the solutions Buddhism offers to the ongoing political, economic, and social suffering of our world.

0
SHARES
Share
Posted Under: 2012, Dharma Education, Summer
About the Author: Jack Hamrick
Jack Hamrick is a major in philosophy at Seattle University, where he will be graduating this June. He has practiced with the EcoSangha at the university for the past 18 months, and will be receiving Jukai, or lay ordination, in the tradition of Soto Zen this summer.