The board of Northwest Dharma Association includes directors who live in various parts of the region, currently the Seattle area, Olympia, the Portland area, and Eastern Washington.

The board meets in person twice a year. In the summer the new board takes office and reviews the association’s work since the last Strategic Planning Meeting, which is the other in-person meeting, and which takes place in the fall. 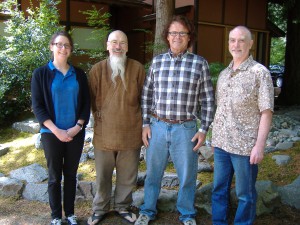 This year’s first meeting of the new board occurred on Sunday, June 10, at Open Gate Zendo in Olympia, the home of R.L. (“Miles”) Miles, the incoming board president, and his wife Kathy Miles. At the meeting the board elected new officers, set the 2012-2013 board calendar, reviewed the sub-committee/task force composition, and set goals for the coming four months until the next planning session in October.

Jeff Miles, from Mountain Way Zendo, also joined the board. 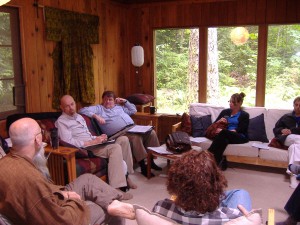 Board members and Executive Director Timothy O’Brien discuss association business at the June 10 meeting, at the Open Gate Zendo in Olympia.

Retiring President Dick O’Connor will serve as past president on the board after having served two three-year terms. He will assist the organization in fundraising and outreach.

There are still three vacancies on the board, and those interested in serving are encouraged to apply for the openings.

Last year, the Northwest Dharma Association board set up a system of committees and task forces, a structure that was updated at the meeting. 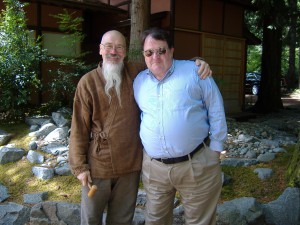 There are also non-board members serving on the committees and task force.

Major goals for the coming four months include reaching the fund-raising goals of the 2012 budget, including the additional expenses of re-hiring Executive Director Timothy O’Brien and re-designing the NWDA website. In addition the board will fill the three vacancies on the board, and settle on dates and places for the next 12 months’ events.

The meeting ended with a dedication of merit and with Dick thanking the board for the opportunity to work with such a great group of Buddhists, all of whom have enriched his life.

0
SHARES
Share
Posted Under: 2012, NWDA News, Summer
About the Author: Timothy O'Brien
Timothy O’Brien is administrator of Northwest Dharma Association, and has served the organization in many capacities in the past.