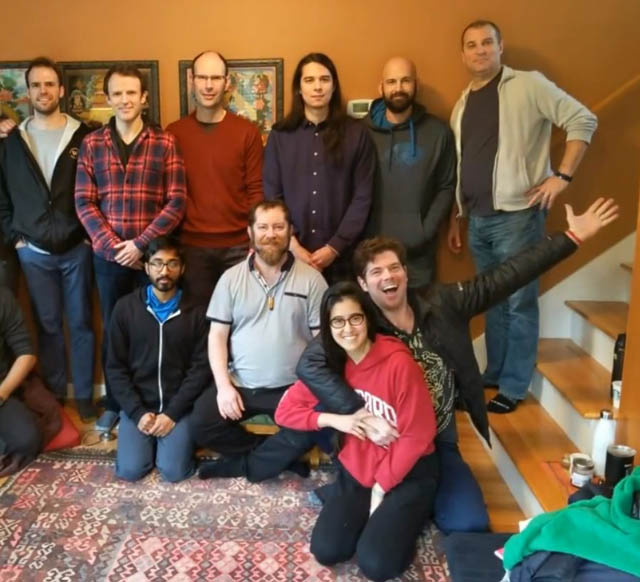 It’s a cold Friday night in Seattle, and a dozen or so people are gathered in a cozy coffee shop for the expressed purpose of sharing their meditation practice with one another. They have gathered here every Friday night for over three years.

These are the SPUDS, the Seattle Pragmatic (Underground) Dharma Society, a steadily growing group of friends, old and new, who meet every week to discuss their meditative experiences and to support each other’s practice.

As regulars CJ Liu and Gideon Rosenblatt arrive, Jim Irving stands to give them a hug.  In a practiced, familiar, and visibly heartfelt manner, everyone present hugs the two as they rejoin the circle.  The conversation continues as more folks stream in, and the interludes of greeting arrivals gets longer ever time.

Noah Starbuck speaks up, “Ok folks, looks like we’ve got quorum.  I think it’s time for ‘how’s your practice?’  Who wants to go first?”

Aman Agarwal, clearly jazzed about what he’s about to share, says, “Unless anyone else objects, I’ll go first.”

The SPUDS listen in rapt attention as Aman shares about his experience.  When his story is done, and the weight of the expression has properly settled, he opens the floor to questions.  The others ask him probing questions about his experience to try to understand it more deeply.  They use jargon and technical terms, often Sanskrit and Tibetan, as they help Aman unpack and integrate the latest breakthrough in his practice.

When Aman senses it is time to move on, he prompts, “Who’s next?”

“I’ll go”, Aurea Li responds, and the SPUDS lean in once more.  The stories range from ecstatic to defeated, from complete satisfaction to, “I can’t even bring myself to the cushion today.”  And they all show up to listen, in a shared meditative act.

This activity first started in early 2016, after a few individuals who initially connected through online meditation forums agreed to gather in-person to discuss meditation techniques, maps of awakening, and their personal results.

At the time each of them was active in one or more local sanghas, but found the aforementioned topics were often absent, or even actively discouraged.  They were still hungry for rigorous, practical, honest discussion of actual meditation, and time with qualified meditation instructors to discuss such issues was scarce and expensive.

In order to meet their shared need to understand meditation, where it leads, and what on earth is happening to them, the SPUDS formed as an egalitarian group without a primary leader or teacher.  The word “underground” in the name is used in a tongue-in-cheek fashion, mocking the group’s unstructured nature and helping round out the acronym. According to Dominic Ng, “When we first started, it was really a support group for people who couldn’t stop meditating.”

The earliest members of SPUDS were deeply influenced by the pragmatic dharma movement, and that is reflected in the ethos of their group.

“Probably the biggest thing that separates us from most sanghas we’ve visited is that we believe awakening is possible, in this very life, by people like us with nine-to-five jobs and urban lifestyles,” said Noah. He adds that while new people sometimes join without that vision of possibility, their doubt “Never survives continued practice and honest reflection.”

As the name suggests, members are pragmatic to the core.

“Good practice leads to good results,” Devin said. “If you’re not getting results then you’re either not practicing for them or practicing poorly.”

At each meeting the SPUDS do a round of “How’s your practice?” Each member, in turn, has the opportunity to open up to the group about what they’re doing, how it’s working, and sometimes how it’s not, while everyone else gives that person their full attention.

Then the other members ask probing questions and offer suggestions and hypotheses, leveraging the best of their understanding to help each other’s integration.

“I can’t count the number of times that the others have helped me reform my practice and see things I had missed,” said Suyoung Young. “We benefit from each other’s learning because we actually listen to each other.”

And then there are the maps… So many maps.  It’s not unusual to see the SPUDS huddled around a table covered in every esoteric map of enlightenment they can find, cross referenced and annotated, like “A Beautiful Mind” meets mysticism.

“We’re incredibly blessed to live in an age where this information is available and finally free of the secrecy it has been shrouded in for literally thousands of years in some cases,” said Andrew Mikulski. “We’re even luckier to have a group of people with the sort of systems engineering mindset and openness to new ideas to be able to integrate this information and synthesize it for other similar-minded people.”

Helping the process is members’ familiarity with a shared language.

“A lot of us cross-train in different traditions, but enough of us share similar foundational practices, like TMI-style concentration or Mahasi-style noting, that we can communicate about our experiences,” Dominic said. “Models like the text “Progress of Insight” have become the lingua franca, and they serve to enhance our understanding rather than limit it through dogmatism.”

Even within the Pragmatic Dharma movement, SPUDS has a unique Seattle-techy flavor. Members frequently bring devices or software they’ve built to support their meditation practices.  They even built their own EEG machine when commercially available devices couldn’t get the data they wanted.

“A lot of us have jobs in software or systems at scale that have taught us to value the sort of practices that make organizations work,” Jim said. “We look ahead at what problems exist on the horizon.  We plan for growth.  We’re open to being wrong and actively look for places where we can remove our conditioned delusions.”

“We understand the value of inclusion.  We have the most to learn from the person least like ourselves.  Every person has brought something new to the group, and we’ve all benefitted.”

As a result, the SPUDS constitute a wide range of practitioners.  Their practice traditions include Theravada, Mahayana and Vajrayana forms of Buddhism, as well as non-Buddhist traditions including Kashmir Shaivism, Advaita Vedanta, Toltecism, Mental Science, Hermeticism, theoretical physics, and many more.

Most members have one or more teachers and attend regular retreats, while others maintain a primarily self-guided practice.  The SPUDS frequently read and discuss a wide range of source texts (sutras, tantras, scriptures), modern books, audio courses, online seminars and video content on spiritual practice, and share all those influences with each other across this shared language.

The real story isn’t about the SPUDS in particular, but about how the natural drive to awaken organically assembles human lives to grow and flourish, wherever they are, in whatever way is appropriate for the time.

“I recognize that I’m part of a mandala,” Zai said. “We’re all going through this together, and it’s easy to see how we’re each learning the same lessons, even when we’re apart.  Sharing them with each other unifies us, and strengthens our realization.  I wish everyone had a SPUDS.”

To read more about the SPUDS, or to find out where the next meetup is, check out the SPUDS website.

Jim Irving is a tech professional and meditation enthusiast in Seattle.  He is a founding member of the Open Dharma Foundation, where he currently serves as a chairman.  He is also one of the original members of SPUDS. Any mistakes in this article or deluded ideas are the fault of the author alone.