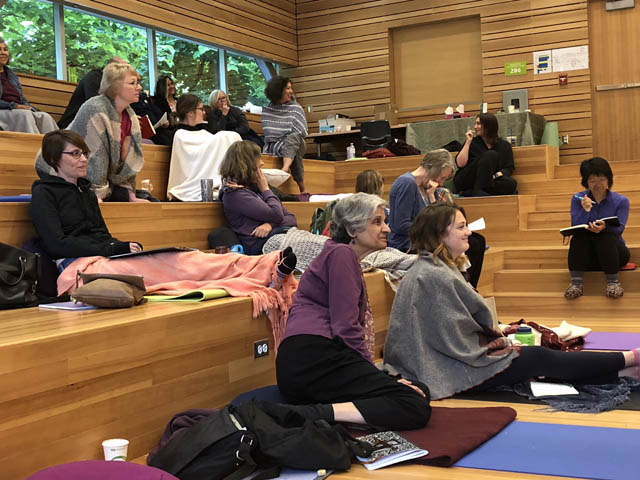 Participants attending the first MBSR facilitator training in Western Canada at the University of Fraser Valley in 2018, in the Indigenous Gathering Place.
Photos by: Doug Astle, Chris Campbell, courtesy University of the Fraser Valley

This fall the University of the Fraser Valley in Canada launched one of the first graduate mindfulness programs in North America.

Our team in the Department of Adult Education has developed a program to support evidence-based approaches to teaching and learning mindfulness. People earning the Mindfulness-Based Teaching and Learning (MBTL) graduate certificate will use their skills in health care, education, social work, policing, coaching, yoga teaching and corrections.

The four-course, 10-month, part-time program will transfer readily into a range of career pathways, including the masters of education program at the University of Calgary.

We designed the Mindfulness-Based Teaching and Learning graduate program for working professionals. Most of the program is online. Distance learners can take advantage of the university’s cutting-edge video technology to participate remotely, while local learners can join the intermittent face-to-face classes.

Overseeing the development of this program, I am reminded constantly of a vision I had as an 18-year old, of the importance of meditation. To witness this come full cycle in my own lifetime – from a vision in a high school social science research paper to years spent living in monastic conditions to designing a program based on the prolific and remarkable research emerging across disciplines and applied to education – is worth more than any accolades or profits that might have come from a more conventional life.

My personal story as a mindfulness practitioner mirrors the journey of mindfulness in our time. As a high school student in 1977, I wrote an 80-page research paper on whether or not we could learn to be more creative, concluding that the only promising research was on meditation. Evidence in hand, I resolved to learn to meditate myself.

Emboldened by my own research I first learned Transcendental Meditation, a Hindu-origin practice, and then moved on to Buddhist meditation training. So convinced was I of meditation’s value that I eventually left university to join a community of Buddhists, and later traveled the world to learn more. Eventually I found myself living in Tibetan monastic institutions and studying with His Holiness the Dalai Lama, in the Indian Himalayas.

Over these years my interest in applying mindfulness within secular education never wavered, which probably is why the Dalai Lama was such a suitable guide for me. He is committed to exchanges between Buddhism and science, most famously through the Mind and Life meetings.

In 1997 I was fortunate to closely witness one of these early exchanges, in a week-long Mind and Life dialogue between leading physicists and the Dalai Lama in his private residence in Dharamsala, India. Others there included scientists, academics, journalists and Tibetans.

A notable moment came after Austrian quantum physicist Dr. Anton Zeilinger described the scientific inquiry into light’s nature that produced the quantum paradox. Dalai Lama replied that this corresponded with the Buddhist view that if you were to examine any phenomenon to its essence, you would discover just such a paradox: i.e., the lack of a true or inherent nature.

Then the Dalai Lama asked Zeilinger, “So how did this knowledge impact you?”

Zeilinger responded that it had changed “our understanding…”, at which point the Dalai Lama clarified, “No, I mean how did it affect you, personally?”

After the third attempt to clarify his question, Prof. Zeilinger’s eyes lit up.

“Oh, I see what you mean,” he said. “It has changed everything. Before I lived in in a Newtonian worldview, believing that the future was pre-determined. Now I know with confidence that the future is not fixed, that I am free.”

This was my “Aha!” moment, watching how the gap in modern education made it so difficult for this scientist to comprehend the Dalai Lama’s question. For Zeilinger the automatic assumption was that the end-value of scientific knowledge was something abstract, public, or at best technical; rather than the ability to transform the well-being and quality of life of the knower.

That was about the same time research into mindfulness and its impact on the brain, health, and lifelong learning began to proliferate. Published research increased exponentially from 10 studies in 2000 to 842 in 2018. Most of these studies researched a secularized, 8-week program of mindfulness training called Mindfulness-Based Stress Reduction (MBSR), or its derivatives.

The MBSR program was developed in 1980 by biochemist Dr. Jon Kabat Zinn, after he completed a month-long Buddhist silent retreat. His intent was to translate the practices into a form accessible to the general population, to assist those suffering from pain and stress by providing mindfulness free of Buddhist doctrine and religious elements.

As the science of mindfulness meditation and its parallel body of secularized programs increased, the interpretation of mindfulness changed. The Buddhist sense of mindfulness as sati (i.e. remembrance) became something new. Mindfulness became re-interpreted as “present-moment awareness free of judgment.”

So divergent have the two understandings now become that during a 2017 Toronto teaching, His Holiness the 17th Karmapa in 2017 code-switched to the English word “mindfulness” while answering in Tibetan a question about his views on the mindfulness movement. He did this instead of using the Tibetan equivalent of sati, because clearly in his perspective they are no longer identical.

Yet as those of us involved in this sustained cross-cultural dialogue are aware, the process of translating the practices and the evidence bases for mindfulness and other meditative practices will continue well into the next century, producing forms of learning that we are yet to even imagine.

Appropriately, we are collaborating in this program with the co-founder of the Centre for Mindfulness Studies in Toronto, Dr. Patricia Rockman, an physician and associate professor of the school of medicine at the University of Toronto. Rockman will co-teach the MBT graduate certificate program with myself and others.

In this respect the certificate program is a pan-Canadian collaboration that mirrors the collaboration between healthcare, social services, and education that we envision for the program’s impact.

Also the program is emerging from the heart of the Fraser Valley, where many continue to be committed to traditional values; a testament to the accessibility and acceptability of mindfulness to a wide range of the population. For instance for years schools in the region have introduced mindfulness, including the UBC-related MindUp program, to children and youth.

The great thing about becoming a mindfulness specialist is that it begins with oneself.

I love that focus on self-care. We start by embodying mindfulness in our own personal and professional lives. Only then can we take the next step of introducing mindfulness to colleagues, clients, and students using evidence-based ethical practices, which were developed through our inquiry-based program and through a mentored field experience. In the process we are building one of the first mindfulness teaching communities of practice in Canada.

Seonaigh MacPherson is associate professor and coordinator of the Mindfulness-Based Teaching and Learning graduate certificate program at the University of the Fraser Valley. She studied Buddhist meditation practices for years in Asia, including with His Holiness the Dalai Lama.