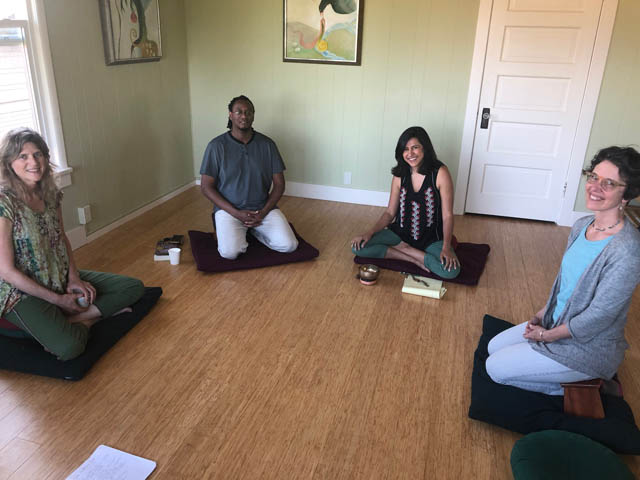 If the news feels a deluge – Trump, politics, starving orca whales, shootings — the people at the Seattle Mindfulness Center have a few suggestions for you.

Therapists at the center, who employ mindfulness techniques to help people overcome anxiety, depression and substance abuse, during a May evening meeting offered insights to a Northwest Dharma News reporter seeking relief from the tsunami of bad news.

The following are highlights from that conversation, along with the reporter’s thoughts, presented as a list of tips for dealing with news that is “not so nice.”

1. Moderate your intake of the news. Don’t be pushed around by it. Find the middle way between extremes of constant intake and a “no news” diet that can leave you uninformed and isolated.

2. Watch your reactions to the news. Are you judging people? Are you labeling them? Are you building a sense of self by liking some people and disliking others? Mindfully noticing this tendency can help you stay centered and open minded.

3. Enhance your own mindfulness. Practice meditation with other people. Because it is easy to get lazy and to not meditate on your own, it helps to find at least one other person, a sort of “study buddy,” to check in with to keep each other practicing.

“That’s the challenge,” said Teresa Williams of her new clients’ approach to meditation. “They haven’t internalized what to do, so it helps to have some kind of narrating going on a little bit initially when you’re trying to figure out how to begin. Once that starts to happen, then it’s easier to do on your own.”

Mindfulness, the therapists say, is not judgment. It replaces judgment with curiosity.

4. Don’t mistake the point of meditation. “People think that somehow their thoughts should stop,” Williams said, “I’m just constantly emphasizing, ‘We’re doing this for awareness… We’re not trying to stop our thoughts, and that awareness is healing in and of itself.’”

5. Take time to read. Mary Roy, a therapist with a background in grief counseling, said that Jon Kabbat-Zinn’s book “Full Catastrophe Living: Using the Wisdom of your Body and Mind to Face Stress, Pain, and Illness,” was influential to her, and it has lasting relevance.

6. Take action. People often associate mindfulness with inaction. But taking appropriate action to make a positive change can not only build community but can also prevent a sense of hopelessness. The center, for example, has taken up the cause of social justice.

7. Be wary of “mindfulness mania.” Sometimes the word “mindfulness” gets used for the opposite, a sort of rampant thinking. Sometimes it’s used as a substitute for “being more careful than usual.”

Some people, such as Ronald Purser, author of “McMindfulness: How Mindfulness Became the New Capitalist Spirituality,” argue that mindfulness has been coopted by governments, corporations and schools. Because of this he believes such mindfulness has become a tool for social control and self-pacification, which in fact prevents the sort of transformation that’s most needed today.

“I do find it concerning when somebody says, ‘Well, I’ve been practicing all this mindfulness,’ and I say, ‘No’” Roy said, shaking her head. “Many times they aren’t really practicing mindfulness. Maybe they’ve had a therapist ask them how they feel at the present, but the person using the word ‘mindfulness’ has no real, mindfulness practice.”

Mindfulness, the therapists agree, is difficult to define and has many different definitions. The center’s website says “Mindfulness is the gentle effort to continuously attend to and be present with our experience, as it is. It involves greater awareness of thoughts, feelings and sensations, without criticism. This allows for seeing clearly, whatever is happening in our lives, and creates an opportunity to step away from habitual, reactive patterns.

“Mindfulness is not about eliminating life’s challenges, but rather responding to them in a more skillful manner, thus creating opportunities for greater freedom and choice.”

Chawla says that in practice it gets down to a central point. “There is something about the question at the center: What’s happening right now, not the story that my mind is telling me about, not something that happened back then or what I think is going to happen, but what’s actually true this moment…  It’s a kind of tuning in to your experience as it’s unfolding right now … with less adding on.”

While the therapists share the concern that mindfulness might be used incorrectly, they don’t seem close to dumping the idea. They’ve experienced its benefits in themselves and in their clients. To criticisms of a sort of mindfulness mania in society today, Roy, who encourages the practice in her clients, sort of shrugs, “Well,” she said, “there could be worse things you can be interested in.”

“It’s pretty remarkable to see what, when people actually practice, especially with depression and anxiety, in particular, what relief and what results people get,” Williams said. “So I’ve been just encouraged.”

The conversation with the therapists highlighted something I’ve noticed — that people don’t often turn to mindfulness because everything is going great. They turn to it because they recognize that something is wrong, and they feel that mindfulness holds some promise.

Neha Chawla, founder and director of the center, said that in her early 20s, she suffered mentally and emotionally. This led her to the Insight Meditation Center for drop-in meditation sessions. She went on a long retreat, read books.

“A lot of it resonated philosophically, especially the kind of see-for-yourself, experiential way, non-dogmatic. And after going on retreat, it felt very radical, and I thought, ‘This is what I want to study. This is what I want to do with my life somehow.’ It’s like ‘Well, do I go live in a monastery or do I go to graduate school to study this?’”

At the University of Washington, she co-wrote the Mindfulness-Based Relapse Prevention program, which is used in therapy today. Eventually, she met other people who were interested in building a community centered on the idea of mindfulness, used in both private therapy and meditation sessions that are open to the public.

The Seattle Mindfulness Center has classes for mindfulness based relapse prevention, stress reduction, and cognitive therapy, along with drop-in meditation sessions for advanced practitioners.

Bob Baumgartner works as the service manager for a company in the fitness products industry. The father of two college-age kids, he can be found on weekends at the Seattle Meditation Center when he isn’t mindfully wandering through the woods or unmindfully worrying about the fate of the world.