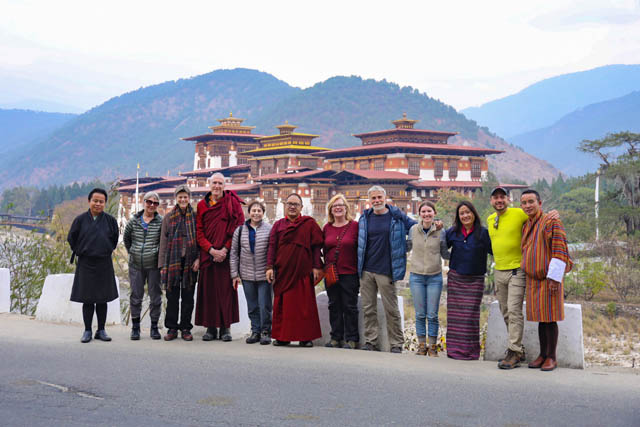 Seven dharma practitioners from Portland and Seattle made a pilgrimage to Bhutan in March, and returned inspired.

We gathered in Bodha, Nepal, then flew on a clear day along the glorious Himalayas from Kathmandu to Paro, for the first of many glimpses of wonder. When we landed at the sole Bhutanese international airport in Paro, tour guides approached with traditional Tibetan greeting scarves called khatas, bowing to each pilgrim and welcoming each with the white scarf of honor.

The Himalayan kingdom of Bhutan is a lush, rugged Buddhist country nestled between Tibet and Sikkim. Many have heard of Bhutan’s goal of “Gross National Happiness,” or GNH. Profound ancient Buddhist masters have been associated with the evolution of the dharma in Bhutan since the 8th century, including Padmasambhava, Yeshe Tsogyal, Longchen Rabjam (Longchenpa) and more recently, Dilgo Khyentse Rinpoche.

To visit Bhutan one must travel in a group and go through one of the approved travel agencies. This well-organized, smooth-running pilgrimage was organized by the eighth traveler, from New Mexico, in conjunction with Nangyzertours.com.

Giving extra potency to the trip was an once-in-a-lifetime opportunity to travel with the vajra master of Shechen Monastery of Nepal, Adzom Gyalse Rinpoche, who joined the tour guide in illuminating the spiritual heritage of Bhutan.

On the first day in Paro performers offered the famed Bhutanese dance, while wearing an array of local dress. The group presented one ritual called the “Dance of the Eight Manifestations of Padmasambhava.”

In the 8th century Padmasambhava, also known as Guru Rinpoche, was invited to Bhutan by Sadhu Raja, the king of Bhutan. Bhutan is located in the southern tip of Tibet.

During Padmasambhava’s stay King Songtsen Gampo of Tibet commissioned 108 stupas throughout Tibet. Two of the stupas were built in Bhutan.

Trekking up the sacred mountain with dharma brothers and sisters brought another experience of wonder. For us to sit and practice at the site where the omniscient Longchen Rabjam lived and taught brought awe and camaraderie on the path, solidifying a dharma bond. From then on the group named ourselves “Bhutan Buddies.”

The 10 years Longchen Rabjam spent “self-exiled” in Bhutan towards the end of his life is chronicled in “The Life of Longchenpa, The Omniscent Dharma King of The Vast Expanse.” This was compiled and edited by Jampa McKenzie Stewart, and published by Snow Lion.

On our pilgrimage we visited Longchenpa’s temple Tharpaling, and meditated on the mountain where he wrote part of his historic “Seven Treasuries.” This brought the dharma home for those practicing today from this collection, tibetantreasures.com, translated by Padma Publishing.

A blessing for the Pacific Northwest this summer is that Adzom Gyalse will be offering teachings from the “Seven Treasuries.” These teachings will  be sponsored by Samden Ling and Dorje Ling, both in Portland.

Twenty years ago a great Tibetan Buddhist Master visiting Portland, Oregon and the Pacific Northwest, predicted that the Longchen Nyingthig tradition, culled from Longchenpa’s transmissions, would become prominent and would spread in this region of the U.S. Currently several Northwest dharma centers teach the wisdom and practices of Longchenpa.

Visiting these sacred places impacted us all deeply.

“To do practices with Adzom Gyalse Rinpoche in Bhutan, and receive teachings at the actual place where great masters practiced, profoundly affected me in a way that transcends words,” said Bhutan Buddy Jampal Gyatso (Clark Hansen). “As a monastic in the vajrayana tradition I have never felt more accepted for who I am as a monastic than I did in Bhutan. It seemed natural and my relationships with the local people felt easy and uncontrived. It was wonderful to be in a country that was both very progressive yet very traditional.”

The feeling of safety and security being in a country that predominantly follows Buddhist ethics was echoed by another Bhutan buddy, Eve Pagano.

“Bhutan and the Bhutanese people, steeped in Buddhist culture, are something extraordinary in our world,” she said. “I feel so fortunate to have experienced a taste of it.”

Living Buddhism describes daily life in Bhutan. People are kind, the king and queen care about the people and are loved by them. Bhutan offers free education and free health care to all its citizens.

Buddhist activity is prominent in Bhutan. The country is blessed by one of the world’s largest Buddha statues, plus active monasteries and nunneries. While we were there the Shechen Nunnery nuns were getting ready for a practice period and had just constructed their own sand mandala for the practice.

Bhutanese authorities have preserved Rinpoche’s residence, place of teachings and stupa, to honor his years in Bhutan. His gold gilded skull is displayed at the Memorial House of Dilgo Khyentse Rinpoche, along with his many texts and ritual objects.

Seeing his bed and furniture, touring car and thangkas, gave the impression that everything was still just the way he left them when he passed away in 1991. “Brilliant Moon: The Autobiography of Dilgo Khyentse,” is available through Shambhala Books.

Most pilgrims and tourists look forward to visiting the iconic “Tigers Nest,” a temple and sacred site perched on a rocky outcropping 3,000 feet above the valley floor.

To reach the temple we hiked up a long zig-zag path up the mountain, reaching the sacred cave where Padmasambhava and his consort Yeshe Tsogyal practiced. All the Bhutan Buddies and our guides accomplished the long hike, looking out to snow-topped mountains in the distance.

Adzom Gyalse Rinpoche led the practice in Padmasambhava’s cave. We practiced “Shower of Blessings,” a food offering ceremony called tsok, in the very hall where Padmasambhava practiced. Blessed food was shared with those who happened into the shrine room at that time.

On our last night in Bhutan, a professional dance group performed traditional Bhutanese dance and music. One highlight was a masked performer acting as a yak herder and bringing in his yak, which was two men wearing a yak costume coming around to each participant.

All of us smiled, and experienced the Gross National Happiness of Bhutan.

Lama Jacqueline Mandell is the resident teacher of Samden Ling, dedicated to the transmission of the Longchen Nyingthig teachings and practices. Jacqueline first began Buddhist Meditation in Bodh Gaya, India, in January 1972. She has trained in three major Buddhist traditions.