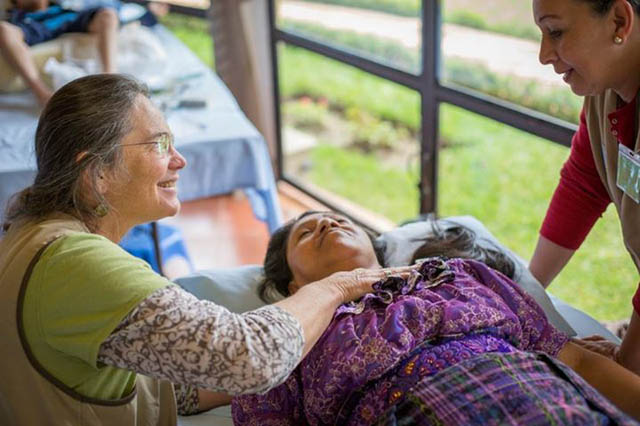 Cynthia Price, lead author of the body awareness research, working with a woman and a translator in Guatemala.
Photos courtesy Cynthia Price.

A novel type of mindful body awareness training shows promise in treating substance addiction, according to new research from the University of Washington in Seattle.

Research results, published in March in the journal Drug and Alcohol Dependence, showed marked improvement in a group of women who had the body awareness training in addition to addiction treatment. These women showed more improvement than two other groups of women, one which had substance abuse treatment only, and another which had women’s health classes in addition to addiction treatment.

The group that received body awareness training showed fewer depressive symptoms, less craving, and better emotion regulation than the other two groups.  And one year after the study began, this group showed less substance use than the group which had substance abuse treatment only.

A physiological index of emotion regulation was also improved at one year for the women who learned body awareness skills, more than for women in the other two groups.  In addition, at one year, many of the women were still actively employing the method.

According to UW News, this research marked the first time the mindfulness approach has been studied in a large randomized trial as an adjunct treatment. The research, which involved 187 women at three Seattle-area locations, was funded by the National Institute of Drug Abuse, National Institutes of Health.

The technique, called Mindful Awareness in Body-oriented Therapy (MABT), teaches people how to access and process sensory information from the body. The idea is that the mindful recognition and processing of body sensations can help people deal constructively with feelings that might otherwise trigger relapse.

MABT was developed by the research’s lead author, Cynthia Price, a research associate professor in the UW School of Nursing, as part of her doctoral work. It stemmed from her experience as a massage therapist and body psychotherapist.

Researchers report that trauma, from abuse or other experiences, tends to make people disconnect mentally from their bodies. This allows them to function on one level but to not process the trauma. The result can be dysregulated emotion: anxiety, depression, aggression and post-traumatic stress disorder, issues often associated with substance abuse.

MABT seeks to help people identify, access, understand, and respond to internal signals. Unlike general mindfulness, which can be taught in group sessions, MABT is taught in one-on-one sessions that involve touch.

According to the Center for Mindful Awareness in Body-oriented Therapy, a non-profit founded by Price, the technique helps people meditate who otherwise might fail in meditation. The center’s website quoted one person as saying, “This is why I thought this approach was amazing because it taught me to meditate. Now I meditate every night. The difference is having someone lead me into learning how to do it first.”

Price says that different people relate to the technique differently. For some people, it’s natural to be centered inside the body. For other people, it doesn’t come easily, but touch serves as a bridge.

“Touch allows people to ground their awareness,” she explained in a LiberatedBody.com podcast, “in a way that provides an avenue for them to attend to their internal somatic experience.”

In a phone interview Price explained how the training works.

“What we’re teaching in this approach is really simple stuff,” she said. “It’s a very fundamental skill. It’s like any muscle or any mindfulness practice, the more you do it, the easier it is and the more it becomes an integral part of your daily life.”

The technique, usually seen as an adjunct treatment, will be used in different studies. One of these will apply the technique to children with sleep issues because of cell phone use, and another will seek to treat men and women with opioid use disorders.

Joseph Merrill, University of Washington professor of medicine and an expert in addiction medicine, is working with Price on the opioid intervention study. He said a small pilot study was funded, and this summer work will begin with a larger group of men and women at Seattle’s Harborview Hospital and three local community clinics.

“I think the science is good,” Merrill said of Price’s recent research, adding that one question to be studied is whether physical touch is necessary.

“Is this something that could be taught without touch?” he said. “I think the answer is probably yes, but we haven’t done those studies.”

“It does seem … that a lot of people do use drugs and use opioids to mask trauma or mask distress that is overwhelming to them,” he said. “If you are going to teach skills to improve people’s ability to tolerate distress or to deal with trauma, having there be a connection to the body makes a lot of sense to me.”

Bob Baumgartner works in the Seattle area as the service manager for a fitness product company. He supports Northwest Dharma News by writing a few stories now and then.