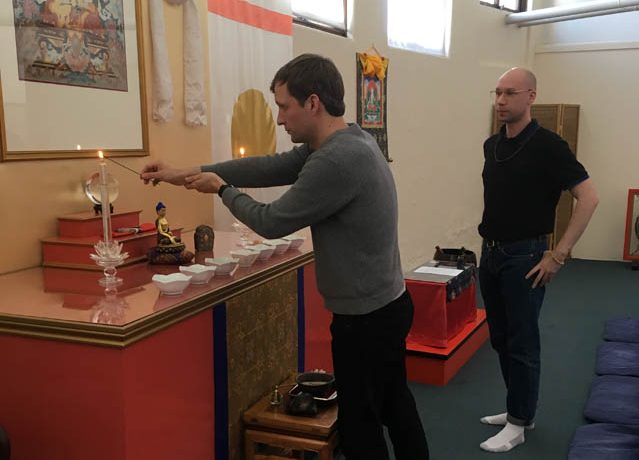 David Cook opens the shrine for the weekly get together of the Young Meditators group. Cory Paulo observes so he can open the following week.
Photos by: Dale Bennett, Mark Douglass, Jay Stewart

With less than a year to go on our lease, the Shambhala Center of Portland is looking for a new home for practice.

But this seems to get harder by the minute. Options for something affordable are decreasing in Portland and throughout the Pacific Northwest, as costs per square foot increase.

We’re trying everything. In addition to renting another and less-costly space, we’re exploring interfaith space sharing, perhaps with a faith group faced with a shrinking congregation and excess space.  Another option we’re pursuing is to rent a good-sized space and sublet part of to a compatible group, or to sublet from a compatible group.

We know we are not alone in facing these challenges. Other Northwest Buddhist organizations are also struggling to find affordable spaces to rent in areas that have good public transportation and are widely accessible.

Right now, for example, class B office space in Portland—likely either not good quality or in a poor location—rents for upwards of $25 per square foot.

Meanwhile the cost of Portland Shambhala’s existing 2,300-square-foot space has been rapidly climbing. We had been paying $1,500 per month, but as of last fall our rent is now $3,000 monthly, a bit more than $15 per square foot.

And this is after our considerate landlord deferred the additional $500 per month he had initially planned to require.

It’s easy to imagine envious sighs from Seattle and Vancouver Shambhala centers, as well as other groups seeking affordable space.

All this means we’re pursuing multiple options, connecting with others—hence this article—until we land on a good workable solution.  We may even “shelter in place,” but we anticipate more rent increases in keeping with the current market.

Right now, we’re talking to a Lutheran congregation about possibly renting one or two of their classrooms for our needs.  We’re also contacting local groups to see about sharing a rental.  Nothing concrete so far.

The Shambhala Center of Portland is part of a worldwide network of more than 100 centers, practicing in the tradition of Tibetan Buddhism. It has been located in part of the historic Carnegie Library building in southeast Portland for more than 20 years.

Like many spiritual groups before us we started out small, meeting in a member’s basement where she had a shrine set up. Next in about 1994 we rented a room from a non-profit in the northwest corner of our current building, to gather and to practice meditation for one night a week.  We used a portable shrine stored in a closet.

Then we moved up, renting the current shrine room and library one night a week from a New Age preacher, who had the space filled with plants and angels.  This meant each time we held a meditation practice, class or event, we had to set up and take down the shrine and move meditation cushions in and out.

When the preacher moved on we rented the same shrine room and library we have today, adding a community room a year later.

By about 1999 we were the sole tenant of the shrine room, adjacent library, office and a reception area.  But these were not connected.  Then when the Confederated Tribes of the Grande Ronde vacated, we increased our space and—with the approval of our supportive landlord—renovated to unify all the rooms.

We now host open practice sessions twice a week, several small groups studying and practicing, and a variety of classes and workshops.

So this is a story of growing over time, with more people becoming members and more energy for the dharma; the teachings of the Buddha as offered through Tibetan Buddhist lineages including the teachings of Chogyam Trungpa Rinpoche.

Rinpoche was a leader in bringing the teachings of the Kagyu and the Nyingma schools of Tibetan Buddhism to America, work that continues today. This sense of continuing growth has led us to an even-greater vision.

More than a year ago, when talk of the Carnegie Building being sold came up, we decided as a group to explore buying a place of our own—a long-held and long-deferred dream.

We felt ready.  We were about 130 dues-paying members strong, many of us active volunteers.  Dues, plus income from classes and programs, paid for the rent and the salaries for our part-time director and office manager.

With enthusiasm and confidence, we formed a relocation task force—calling ourselves the “Relo Team”—and started meeting monthly to investigate a range of purchase options. We came close to purchasing a property owned by a large church and rented to smaller congregations over the years, but as we researched permit complexities, renovation requirements, and city regulations involved in ownership, we decided not to make the purchase.

In addition, hard reality encroached on our ability to buy anything in the near future.  Several serious factors came into play.

Foremost, in 2018 our spiritual leader Sakyong Mipham was publicly accused of sexual misconduct, along with other people in positions of authority in our worldwide sangha. The fallout from this continues as we question ourselves, each other, and our whole structure, to see how we might repair and go forward.

But other factors came in as well, including declining enrollment in our core Shambhala Warrior Training and other offerings as potential students gravitated to easier options.

Shambhala is a socially-oriented Buddhist path based on a path of meditation developed over a lifetime or more.  But the proliferation of “mindfulness” in our culture, a good thing in many ways, has brought many options for people to learn to meditate, and has suggested benefits could be available easily with little time or effort.

So our story is now one of contraction and reorientation. We are currently thinking we might downsize to a smaller space, ideally about 1,800 square feet, but size depends on the layout, shared space, and the like. Any new space will ideally accommodate all our activities: public practice and teaching, affinity groups, classes and meetings.

We are working all the steps needed to help us make an informed decision—always the best kind when possible—so that in less than a year, when our lease comes due and it’s decision time—we will have well-thought out, concrete options to choose from.

Perhaps you are part of a group that has gone through—or maybe is going through—some of the same growing and shrinking pains we have.  We welcome your perspective and comments.  Please get in touch.

Jay Stewart joined Shambhala in 1974 and is the Relo Team facilitator, a senior teacher, and a meditation instructor at the Shambhala Center of Portland.  Now retired, she has worked as a book editor, mediator and consultant in organizational development.  She is married, has three grown sons and two grandsons. Her email is Jaylyn94952@yahoo.com.

Mark Douglass is the director of health and well-being at the Shambhala Center of Portland.  He joined the Portland Shambhala Center 10 years ago. He practices as a counselor in addiction treatment and recovery, and lives in Portland with his wife and son. His email is mark.douglass@portland.shambhala.org.