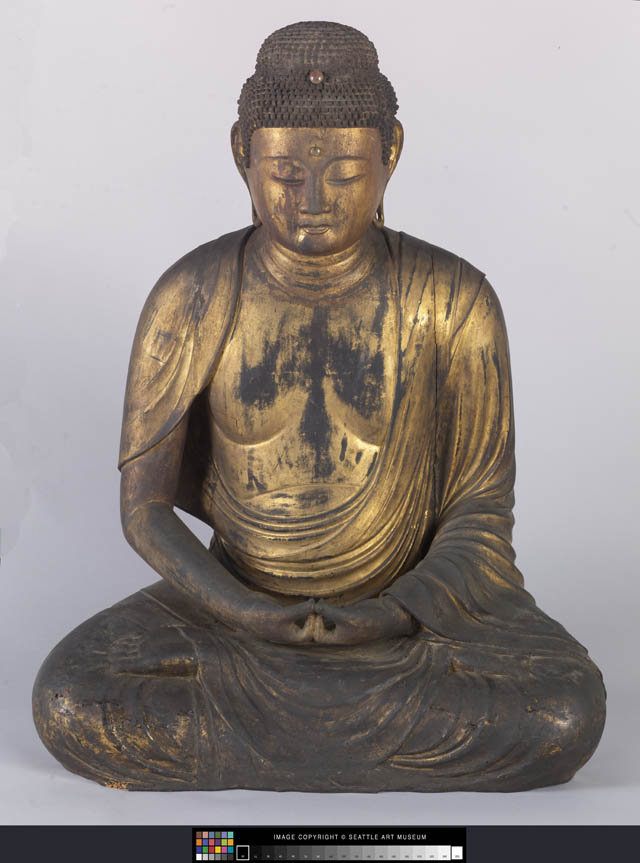 A 12th century Japanese Buddha statue, made of wood with gold lacquer, will face the entry. It was a gift of the Monsen family.
Photos: Courtesy of Seattle Art Museum; Rootology, Wikimedia Commons.

A distinctive new feature of the renovated Seattle Asian Art Museum will be a small gallery designed to invite Buddhist contemplation and meditation.

The gallery, set off from the main visitor pathway, will exhibit only four Buddhist works of art, one on each wall, to allow for more empty space than the other galleries. The sparse art installation in the contemplative space will feature three magnificent sculptures of the Buddha and one painting.

This gallery is just one part of the three-year, $56 million renovation, of the Seattle Art Museum’s Asian Art Museum, located on Capitol Hill’s Volunteer Park. The museum is set to re-open in November. The renovation will include humidity control, for the first time since the museum opened in 1933.

The long rectangular Buddhist contemplation gallery will feature two open entryways along one long side. On entering a person will face a seated Amida Buddha in wood from Japan, dating from the Heian period (794–1185 C.E.).

This Buddha is not quite life-sized and is carved in a meditation position and mudra. Much of its gold foil is still intact on the upper body, while the garment is carved in folds on the lower body.

Fragmentary stone standing Buddhas carved with smooth bodies and a suggestion of a garment will be on either side, one on each of the two short side walls. On the right will be a 7th century sandstone Buddha from Thailand; on the left is a 6th century limestone Chinese Buddha. Their original mudras are unknown, as their lower arms and feet are missing.

On the fourth wall, between the two entryways, an unusually large Korean painting will hang, featuring  the preaching Buddha with attendants.

In addition to the largely empty space, the gallery’s seating, dim lighting, and the lack of text on the walls, will signal the opportunity for a different kind of experience. Music excerpts recorded in several different Buddhist temples in Asia will play on an intermittent audio track.

Seating will allow for four or so people at a time, with room for another two or so to sit on the floor. The space will be open to all visitors during public hours.

People visiting will also find some remarkable enhancements to the building. Most notably, on entering the building they will notice natural light and views out to Volunteer Park.  The central courtyard of the museum now opens in back to a new glass-enclosed lobby, overlooking the east side of the park and several spectacular trees.

In other galleries, a new installation of the museum’s permanent collection of Asian art will include works of Buddhist art from across Asia: India, the Pakistan/Afghanistan region, Nepal, Tibet, China, Korea, Japan, Cambodia and Thailand. From thangka paintings to ritual implements, the artworks speak to many aspects of Buddhist traditions.

Shown in cross-cultural groupings, Buddhist art works will be juxtaposed with arts of other religious traditions in Asia, in galleries organized around themes such as sacred texts and spiritual journeys.

At the April Northwest Dharma Association community meeting at the Seattle Art Museum, those attending discussed ideas for talks, films, and art-making workshops for the Asian Art Museum’s public programs. They also explored possibilities for collaboration.

Upon opening the Asian Art Museum will operate with a suggested admission rate. It will also offer free days for all on first Thursdays, second Thursdays, and first Saturdays of every month, and free days for seniors on first Fridays of the month, The museum will be open until 9 p.m. every Thursday.