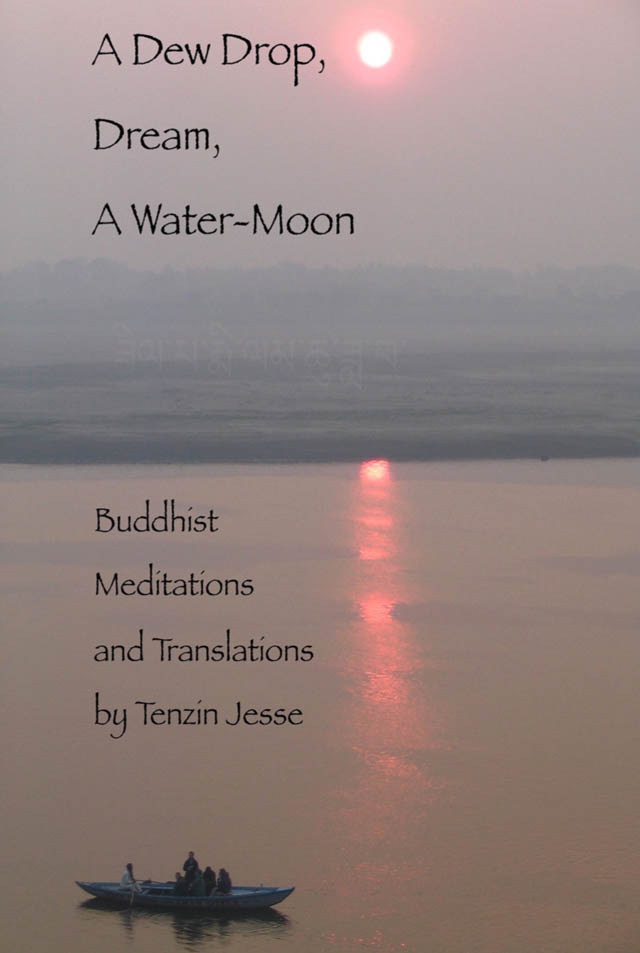 The Ganges River, a short walk from Sarnath, the village in India where Shakyamuni Buddha first taught. Cover design and photo by Tenzin Jesse.
Photos by: Tenzin Jesse, Jason Suplizio

This book collects a variety of meditations and contemplations from the Tibetan Buddhist tradition, and is designed as a practical handbook for dharma practitioners. Here Tenzin Jesse shares with Northwest Dharma News the origins of her book and her new translations.

How did you become interested in the Tibetan language, and what led you to begin translating Tibetan Buddhist texts?

When I first became interested in the Tibetan language in the early 1990s, I was still a sea kayaking guide. I must have spent thousands of hours on wilderness beaches studying grammar and attempting to translate the long, nested sentences that are typical of the language.

I remember standing at the edge of the ocean in Kenai Fjord, watching a glacier calve, reciting the mandala offering out loud, in Tibetan, over the roar of ice hitting the water.

I thought: this may be the first time that Tibetan has been spoken in this place. And then I thought: I have to learn Tibetan. I have some kind of karmic connection with the language. I love it inexplicably.

In the years that followed I studied Tibetan with teachers in all four main Tibetan schools: with the Nyingma teacher Yeshe Wangmo; at the Kagyu Pullahari program in Katmandu; with Jeff Schoening from Seattle’s Sakya Monastery; and with Gelug teachers in Dharamsala. Also I studied Sanskrit with Christina Zubelli, a linguistics professor at the University of Washington.

Translating Tibetan became for me a form of practice, a concentration practice in which my mind is blissfully held to its object, the multi-layered Tibetan word, for long periods of time. Translation refreshes me, transports me, makes me happy. I would do it even if no one ever read it.

How did you decide to start BodhiHeart Sangha, and did you have Seattle dharma practitioners in mind while translating the texts?

I went to South India in 2001, to Ganden Monastery, to receive clarification from Abbot Khensur Rinpoche Konchog Tsering on the interpretation of about 50 points in the text I was working on. This text is called “The Extraordinary Aspiration of Samantabhadra,” also “The King of Prayers.”

That’s when I first met Ven. Dhammadinna, who was also there to attend teachings by His Holiness the Dalai Lama. The seeds for our dharma center and for the book of translations were sown at Ganden, in the presence of the Dalai Lama.

The Foundation for the Preservation of the Mahayana Tradition (FPMT) shortly thereafter published my translation of “The Extraordinary Aspiration.”

When I met Venerable Dhammadinna in India, and we decided to go back to Seattle and start a dharma center, I realized that the vision we had of teaching the young, progressive, tech-oriented population of Capitol Hill would require language that was down to earth, with a tone more psychological and scientific than religious.

We also wanted to reduce unnecessary obstacles in the texts. These included adventitious cultural artifacts in old translations that would turn beginners off and add nothing to the dharma, such as sexist language that is not inherent in classical Tibetan. Gender pronouns are extremely rare in the texts, and nouns are neither masculine nor feminine.

But at the same time I wanted to stay as close as possible to the texts, neither adding anything that wasn’t in the original, nor leaving anything out. At that point, I began to collect my translations.

In 2006 I returned to Seattle, having spent two years in India translating and studying with His Holiness. Ven. Dhammadinna and I then founded BodhiHeart Sangha, and began teaching from these new translations.

BodhiHeart focuses on basic dharma teachings: the lam rim (gradual path), lo jong (mind training) and vipassana (insight) meditation. We try to emphasize what His Holiness emphasizes, and thus many of the texts are ones that he teaches.

There are about 30 different translated texts in the Watermoon collection. Also there’s a three-part glance meditation on the insights of the lam rim, and several children’s prayers, which I wrote myself. I do think the children’s prayers are my favorite part of the book!

Will you share with us a little about some of the translations?

The earliest of my translations in the Watermoon collection is Atisha’s “Jewel Mala,” which I translated under Geshe Yeshe Tobin when he taught the text in Seattle in 1998 during the last year of his life. So, I guess you could say that I’ve been working on the book since then—19 years! Perhaps I’m a bit slow! In any case starting is easy, finishing is hard.

The most recent translation in the Watermoon is the “Prajnaparamita Sadhana.” Prajnaparamita is the Buddha—a goddess—of wisdom and is also embodied in the famous “Heart Sutra.”
I translated all 22 Prajnaparamita sadhanas in the Tibetan canon and settled on one by Asanga, interpolating details (and noting those additions) from some of the other two-armed, golden Prajnaparamita sadhanas. This is certainly not an entry level or even intermediate practice, and frankly, even an advanced practitioner couldn’t pick up the sadhana and practice it authentically without a lot of commentary from a reliable Tibetan lineage holder.

But I’m throwing karmic seeds here, hoping that by putting a translation out there, a lineage holder will appear. I wanted to plant a seed to revive her practice someday.

We are two women teachers who founded a dharma center, and it seems right to use that unusual fact to promote the presence of feminine energy in the world.

The West has a great deal of compassion but is weak in wisdom, which is the complicating view of emptiness that embraces vast complexity and multiple perspectives. In Buddhism wisdom is thought of as a feminine energy. Prajnaparamita is the ancient, almost forgotten, almost lost, goddess/exemplar of wisdom.

Why did you publish the prayer book with a Creative Commons license?

I chose to publish the book under a Creative Commons license because it allows people to download it, print it themselves and even reprint parts of it for re-publication – as long as the authorship is properly attributed. The re-publication is also free.

BodhiHeart’s website has many hundreds if not thousands of visitors from other countries, who we will not meet directly in this lifetime. We wanted to offer them some dharma and make a connection.

For instance last week 32 people from Brazil downloaded the text. I can’t tell you how happy that makes me. It’s the sheer joy of giving the dharma. I want to leave behind me as wide a trail of positive causes in the world as I can, radiating, if you will, unimaginable good out into the future.

Lastly, how can interested readers obtain a copy of the book?

It’s traditional to freely distribute the words of the Buddha. But downloading and printing the text can be expensive in itself, at least here in Seattle. Friends at the Yellow Springs Dharma Center printed our first 100 copies in Ohio and shipped them to us at a fraction of Seattle cost. We may put up an Amazon version if that turns out to be much less expensive than to print the book oneself.

Meanwhile everyone is welcome to go to the Bodhiheart website and download the entire Watermoon collection for free with warm wishes from all of us at BodhiHeart: https://bodhiheart.wordpress.com/text-draft/

BodhiHeart Sangha presents teachings from both the Tibetan and Theravadin Buddhist traditions. For new BodhiHearts, an “Intro to Dharma and Meditation” class will commence in November 2019. For more information, please see the BodhiHeart Sangha website.

Author Tenzin Jesse began studying Buddhism and the classical Tibetan language with Gelug, Kagyu and Nyingma teachers. She completed the studies of the seven-year Lama Tsong Khapa Master’s Program, a
traditional Buddhist monastic curriculum including the Abhisamayalamkara and Madhyamakavatara.

Jason Suplizio is a BodhiHeart student practicing in the samatha and vipassana in the Theravadin tradition under the guidance of Venerable Dhammadinna. Suplizio has also benefited greatly from his studies with the teachers at the Vipassana Metta Foundation, Steve Armstrong and Kamala Masters. He lives in West Seattle with his family.