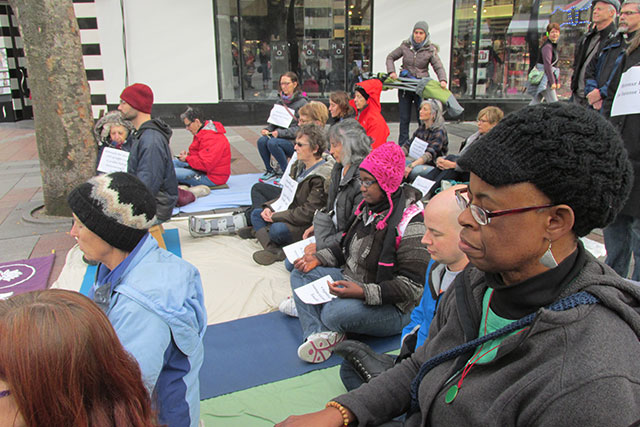 Elaine Waller-Rose, foreground, a social worker sitting with the group, called it “something beautiful.”
Photos by: Steve Wilhelm

About 50 silent meditators gathered in Seattle’s Westlake Mall on Black Friday, to support the Black Lives Matter protests that followed soon after. 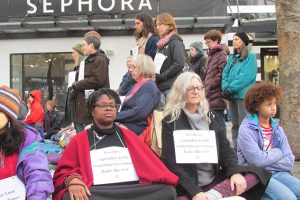 Organizer Tracy Stewart, wearing red shawl, said the meditation before the protest was an alternative to sitting in powerless fear.

The meditators were associated with the Seattle chapter of Buddhist Peace Fellowship. They laid out sheets and yoga mats on the pavement and silently sat and stood meditating, despite the cacophony of holiday shoppers and loud Christmas music immediately nearby.

This was the second time Buddhist Peace Fellowship has opened the Black Friday demonstrations with meditation, said organizer Tracy Stewart. 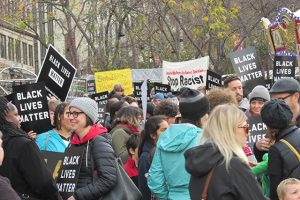 She acknowledged that the recent presidential election has brought up fear for many minorities.

“Instead of sitting around feeling afraid, on your pillow,” she said. “You can get out and do something.”

Elaine Waller-Rose, a social worker sitting with the group, called it “something beautiful.”

“I’ve been to many protests and sits, there’s something powerful about sitting to express what our ideals are,” she said. “I can connect with Black Lives Matter, the Sioux Nation, and all of these people being oppressed.” 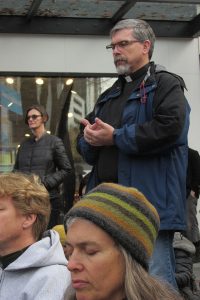 The meditators were joined by several people, including Kelly Dahlman-Oeth, pastor for Ronald United Methodist Church, from a neighborhood north of Seattle.

He joined the standing meditators, his clerical collar distinguishing him from the more alternative clothes worn by most of the group.

“I saw you doing this, and I wanted to add my prayers and love to all of yours, to conquer the fear and hate that is building and growing,” he said. “Centering and breathing, sending out loving kindness that each of us need.”

As the meditation ended at about 1 p.m., more Black Lives Matter demonstrators were arriving.

The massive crowd walked through downtown Seattle and nearby areas, but stayed peaceful until dispersing at about 5 p.m.