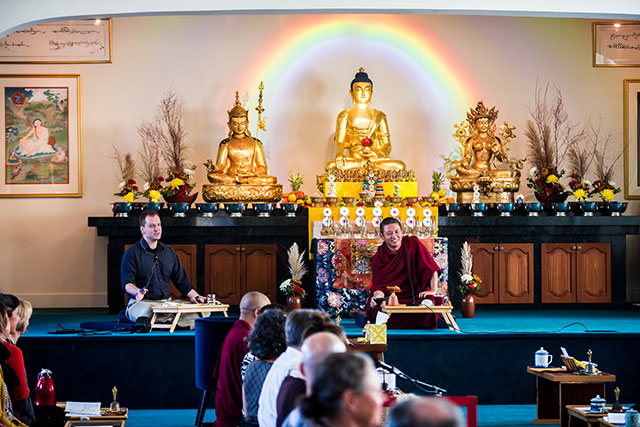 In late October the Nalandabodhi International sangha concluded its first-ever Tara Drupchen, over three days at Nalanda West in Seattle.

Tara, a Buddha who decided to take the female form in order to help sentient beings, remains a beloved Buddhist deity among Vajrayana Buddhists all over the world.  A drupchen is a traditional form of intensive group retreat in Tibetan tradition.

The Nalanda West shrine room filled with participants during a teaching session by Dzogchen Ponlop Rinpoche.

The assembled sangha collaborated to make the ritual offerings and to practice chanting and meditation. They filled the halls of Nalanda West with the sounds of chanting, singing, and instruments during each of the four daily sessions, from the pre-dawn hours until well past sunset.

About 100 people in-person attended each daily session in Seattle, plus an estimated 100 more online. 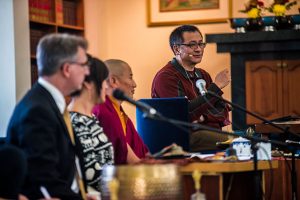 Devoted Tara practitioners made their way through Seattle’s early morning mist each day for the first session, which was led skillfully in Tibetan by Lama Rabten, the resident lama and spiritual director of Maitrivana, the home of Nalandabodhi Vancouver.

Lama Rabten explained how important it was to recite the Tara practice during the dawn hours. He said people should keep the practice at the top of their mind throughout the day, reciting the mantra OM TARE TUTTARE TURE SVAHA even during breaks.

Having taken the vows of clearing away the obstacles, illnesses, and fears of beings, Tara elicits in the practitioner a deep sense of inner strength, compassion, and loving-kindness for oneself as well as others. When these practices are carried out in an environment of a practice intensive (drupchen), the effects are heightened. 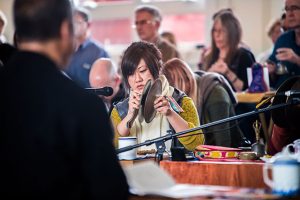 Umdze Christine Hwang playing the cymbals, an important instrument for the ritual, during an afternoon session.

Prayers and aspiration requests received from around the world were posted on boards outside the shrine room for the duration of the three-day Tara Drupchen. Those in attendance read and held in their hearts these prayers, as did global Nalandabodhi members who joined in the practice of Tara from 107 different cities, in 17 countries.

Prior to each session, the resident lamas gave teachings about Arya Tara. Acharya Tashi gave a succinct teaching, peppered with subtle humor, on Arya Tara’s history, her promise, and the practice itself. Acharya Lhakpa taught about how Tara relieves us from the eight kinds of fears, while Lama Rabten trained the umdzes (chant leaders) and gave instruction on the ritual aspects of the drupchen. 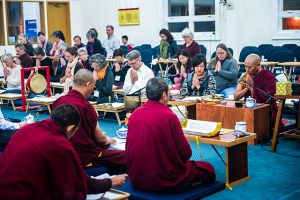 Acharya Lama Tenpa Gyaltsen related moving stories of why the Tara practice is significant to the Nalandabodhi founder and guiding teacher, Dzogchen Ponlop Rinpoche, and to his own teacher, Khenpo Tsulltrim Gyamtso Rinpoche.

Dzogchen Ponlop Rinpoche joined the first afternoon session. He began by giving a teaching in which he equated Tara to great charitable foundations, which engage in altruistic deeds for the community and for individuals who ask for assistance.

Rinpoche said that just as a foundation does not knock on each door inquiring whether someone requires help, Tara will not know who needs help without our heartfelt requests in the form of prayers and practice. Rinpoche joined the assembly again during the final day, to conclude the powerful three days of intensive practice.

Rinpoche then told practitioners that Tara practice is ultimately done to realize the true nature of one’s own mind. When one realizes the true nature of mind completely, he said, one experiences enlightenment and hence liberation from all suffering. 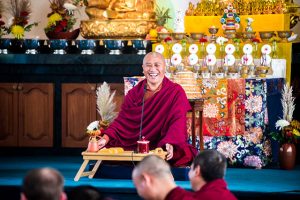 The drupchen was filled with good humor, reflected by Lama Rabten, teaching before an afternoon session.

Participants sent aspirations of harmony, fearlessness, and compassion for all individuals, for their country, and for the entire world. Many present remarked on the powerful atmosphere of joy, harmony, and positivity that pervaded the entire weekend, and that continues to reverberate in the hearts of all.

To carry on the tremendous energy of the practice, attendees wrote down personal commitments to continue the practice in some form for the next 21 days, as a symbolic offering to the 21 emanations of Tara.

More than 270 sponsors from around the world donated financially. Hundreds of volunteers, some working from afar, collaborated to make the drupchen possible.

Nalanda West and Nalandabodhi Seattle convey special gratitude to the organizers, volunteers and participants. We sincerely hope that you’ll be able to join the next Tara Drupchen.

Until then trust that Arya Tara’s power and blessing – inseparable from your own awakened mind – will clear obstacles and help the swift realization of all of your prayers and aspirations for yourself and for the world.