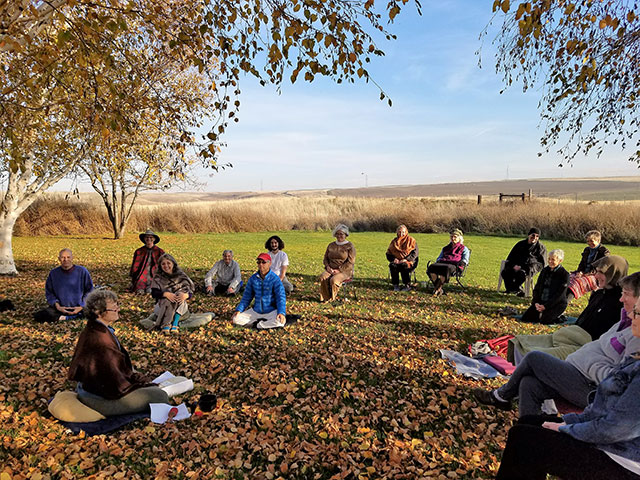 Ten years after its founding Insight Meditation of the Mid-Columbia is growing, with new members and more activities in the community.

We practice in south-central Washington state, primarily in what’s called the “Tri-Cities” (Richland, Kennewick, and Pasco). We call our group the IMMC sangha. 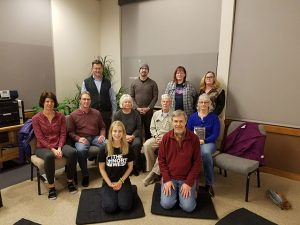 The group provides a sanctuary for Buddhist practice in the desert of central Washington, an area long regarded as a cultural wasteland east of the Cascade Mountains.  Now about 70 people regularly participate in one or more sangha activities, reflecting the group’s growth over the years.

The focus of the sangha is practice in the insight meditation (Vipassana) tradition associated with the Theravada school of Buddhism. But we welcome anyone interested in meditation or Buddhist practice.

Several members of the sangha have a background or orientation in Zen or Tibetan traditions, but have found the sangha a welcome place to practice.  Because there aren’t many options for group meditation in the Tri-Cities, the group also offers a practice option for people who are not Buddhists, but are fellow travelers interested in meditation and spiritual wisdom from other traditions.

In addition, many Christian practitioners in the sangha have found the practices of Buddhist meditation, ethics, and wisdom support their understanding and practice of Christianity.  The group also supports those who don’t have a religious orientation but are interested in mindfulness meditation for stress relief. 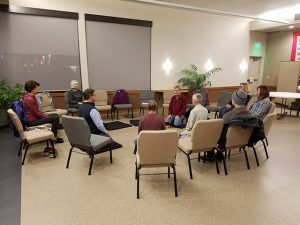 In recent years, many people in the IMMC sangha have stepped into the wider community to help start and lead meditation sessions, volunteer for the prison dharma activity, support the mindfulness group at the Tri-Cities Cancer Center, and other activities.  This has led to growth in the maturity and resilience of the group that has benefitted us all, and sets us up for continued service in the future.

This past year the sangha was asked to start a meditation support group at the Tri-Cities Cancer Center, to provide mindfulness instruction and group practice to aid cancer treatment and recovery.  Those monthly sessions are open to patients, caregivers, and staff at the cancer center.

IMMC sangha members Gayle Wilde and Carl Berkowitz are cancer survivors who found their Buddhist practice critical in supporting them during their treatment and recovery.  Along with Chris Murray and Jon Swanson, they help guide the meditation support group at the Cancer Center. 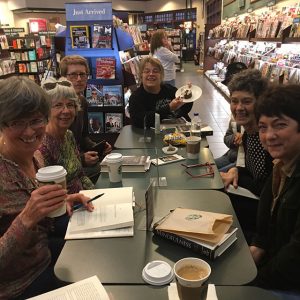 Each week for more than 10 years, volunteers have gone to Coyote Ridge every Friday afternoon to support the Buddhist sangha there.  Those sessions include moving meditation (walking meditation or Qigong), seated meditation (mindfulness or lovingkindness), a short devotional service, and instruction on the Buddhist path.

The inmates’ gratitude toward visitors willing to help support prison practice, keeps the volunteers motivated!  Drew Proctor and Chris Murray have volunteered at Coyote Ridge since 2003.  Jon Swanson, Tanya Lasuk, and Melissa McBurney round out the current group of volunteers.

One of the more rewarding activities of the sangha has been offering daylong meditation retreats four or five times a year.  For most of the last 10 years we have shared those retreats with the Walla Walla Dharma Sangha, bringing in visiting teachers to lead retreats at several locations in eastern Washington.

Members of the two groups have grown close over the years, although most of our interaction is silent! 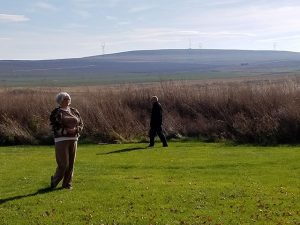 As the retreats have grown we have attracted people from surrounding communities where dharma offerings are sparse. For instance we have recently been joined by several participants from the Pullman, Washington area, who drive more than two hours to join us at the retreats.

The main IMMC sangha meetings are on Thursdays at Shalom United Church of Christ in Richland. This is an open and affirming church that has hosted Buddhist meditation groups for more than 12 years.

We offer two Thursday meditation sessions, one in the afternoon and the other in the evening, with the evening session followed by a discussion group.

The Thursday evening group explores Buddhist practice through discussing books the group reads together.  A Sunday morning group reads the same material and discusses it each week.

In mid-November 2016, the two groups finished a yearlong reading and discussion of Joseph Goldstein’s book “Mindfulness: A Practical Guide to Awakening.”  The book was challenging for some, but almost two dozen people participated in the discussions for the full year.

For a change in pace and tone, the group will next discuss Stephen Batchelor’s book “Buddhism Without Beliefs: A Contemporary Guide to Awakening.” 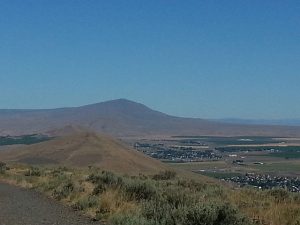 The landscape is spacious and arid in the Tri-Cities region, very different from west of the mountains.

Because many newcomers are primarily interested in meditation to reduce stress, we also discuss the causes of unease and discomfort, the possibility of its release, and practices that can lead to the end of stress.  Basically, we present the four noble truths in secular language.

Many members of the sangha began their journey through an interest in mindfulness meditation for stress relief, and eventually found themselves interested in the full range of the Buddhist path.

Group leader Chris Murray has had a daily Buddhist meditation practice since 1975, when he spent the summer as a visiting student at Green Gulch Farm Zen Center and Tassajara Zen Mountain Center.

97
SHARES
Share
Posted Under: 2016, Sangha News, Winter
About the Author: Chris Murray
Chris Murray has been a practicing Buddhist since 1975, and founded Insight Meditation of the Mid-Columbia in 2006 at the request of members of the community.  He worked as a geologist and geostatistician for most of his career. He is now a semi-retired research scientist who still enjoys studying the interaction of rivers and groundwater aquifers.