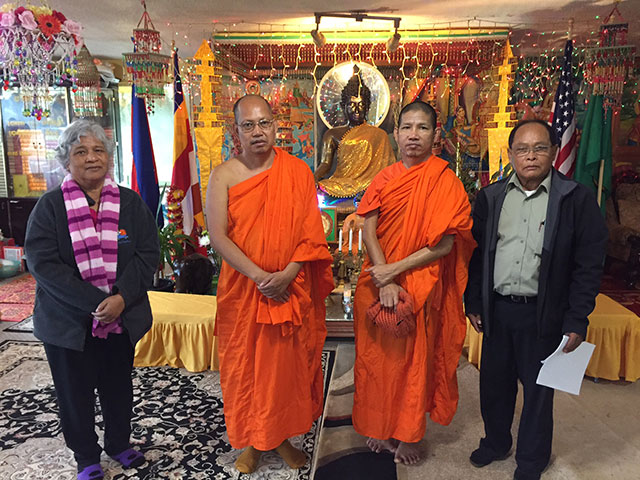 Two months after a robbery in which a monk and a caretaker were held at gunpoint, leaders of the Khmer Theravadin Buddhist Temple in Tacoma are making adjustments they hope will prevent future thefts.

The Tacoma robbery has caught the attention of Asian monastics around the region, many of whom are wondering what they will have to do to keep their monasteries safe.

The Tacoma temple now operates with a new emphasis on security.

These donation boxes – made of steel and decorated with paint – are held shut with padlocks. 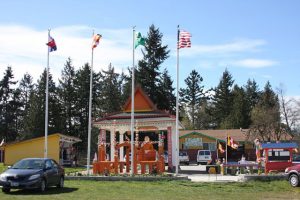 “The head monk, he doesn’t have a key,” says Mon Meas, temple president and founder. “Only I have a key.”

The monk who was held at gunpoint is no longer at the temple. Scared off by the robbery, he moved to a temple in Fresno, California.  Meas said he didn’t want to see the monk leave, but also couldn’t force him to stay.

Remaining at the temple are two monks, Venerable Abbot Chea Poeuv and Venerable Bunthon Sok, both of whom speak Cambodian and little English. “They feel scared of people,” Meas said.

The robbery that attracted KOMO’s attention occurred around 11:30 pm September 1. According to Tacoma police and news reports, two intruders appear to have broken into the meditation area of the temple through a bathroom window.

A caretaker who lives at the temple walked in through the front door and saw a man making off with two donation boxes.

The caretaker knocked on bedroom doors to alert the monks. Then one of the intruders put a gun to the caretaker’s head and told him to lie face down and count to 100.

Alerted by the noise, one monk entered the room. The intruder then pushed the monk down and put the gun to the back of his head. Tacoma police and K9 units arrived about 15 to 20 minutes after the intruders had fled the temple.

Officer Loretta Cool of the Tacoma Police Department said the case had been assigned to the major crimes unit but the suspects had not been apprehended.  The description of the suspects was unclear, no one saw their vehicle, and no surveillance videos could be found. 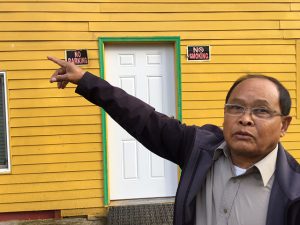 “So, unless someone comes forward with information it will probably not be solved,” she wrote in an email.

The temple robbery appears to be an isolated incident. “As far as I know this is the only temple that was the victim of a crime like this,” Cool wrote.

Growing concerns at temples around the region

News of the robbery has caused alarm at other regional Buddhist temples. A monk at  Atammayatarama Buddhist Monastery in Woodinville, expressed concern that temples might be seen as easy targets.

“The temple is open,” said Venerable Ajahn Ritthi, abbot of the Woodinville monastery. “Security is not enough.”

Washington Buddhavanaram Temple in Auburn, south of Seattle, has had things stolen like decorations and tools from the yard, but no robberies at gunpoint, said Venerable Boonliang Rosehom, the temple’s abbot.

Last August, someone took a couple of hundred dollars in donation money from the Auburn temple, Rosehom said.

The biggest loss to the Auburn temple, however, was the heavy metal donation box, worth nearly $700. Rosehom still wonders how the thieves managed to move it, speculating that two or three people were needed to lift it. 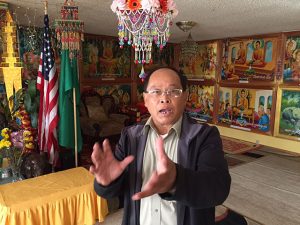 Meas discusses the robbery and the temple’s strained finances.

Abbot Rosehom appears to have taken the loss in stride. He says the temple is not alone in facing crime, as neighbors have also had things stolen.

He adds that because he is from Thailand, he expects some theft.

“Normally, in the temple, you have good and bad people coming, like a school,” he said. “Just protect yourself. That’s it.”

Since August, Wat Buddhavanaram has bolstered its security precautions. The temple added security lights and cameras. Monks lock the yard gate early and have people ring a bell to enter. They have established a good relationship with the police.

“We help each other,” Rosehom said.

Security also is tighter at Khmer Theravadin Buddhist Temple in Tacoma.  Meas keeps the card of a helpful police officer in his wallet. Paper notices inside and outside the temple tell people that alcohol and weapons are not allowed.

The robbery brings up another worry for Meas: dropping participation that makes him wonder about the temple’s future. Now 71 and a retired realtor, Meas is contemplating what might be the end of an era. 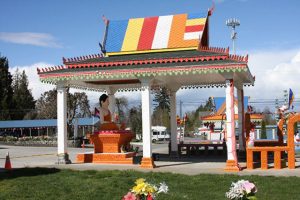 A the center of the temple is a Buddha statue, covered to protect it from Northwest rain.

Old people come and pray at the temple. They donate money. And when someone dies, a funeral is held.

But each death equates to one less patron, he said. Young people don’t often come to the temple or donate. Because the young have assimilated into American culture in a way that their parents never did, the temple doesn’t play the same central role in their lives.

In contrast, at the Tacoma temple on a typical Sunday, the monks might be joined by one or two laypeople. And on some weekends the monks are alone, Meas said.

The temple’s big turnout comes on three weekends in April, when it holds its Cambodian New Year’s celebration. For these celebrations 10,000 people come each day, and there’s dancing and singing and lots of food. Meas even hires Tacoma police to manage the crowd. 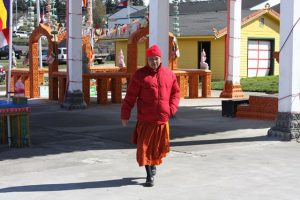 The robbery has brought uncertainty for monks, one of whom has left.

Every month a $1,200 mortgage must be paid, plus utilities.

After the break in, people did help him. KOMO TV News viewers responded with donations totaling $1,700. But Meas estimates the loss from the theft at more than $2,000.

He points to a hole in the ceiling.

Part of the head monk’s job is calling people in the Cambodian temple community, and asking for donations. But the results are modest.

Despite the challenges the temple faces, Meas looks to the future with hope. He is already inviting people to the temple’s big event, the upcoming Cambodian New Year’s celebration, next April.

0
SHARES
Share
Posted Under: 2016, Sangha News, Winter
About the Author: Bob Baumgartner
The father of two kids, Bob Baumgartner works as the service manager for a fitness company. He enjoys the community and insights of friends at the Seattle Meditation Center.