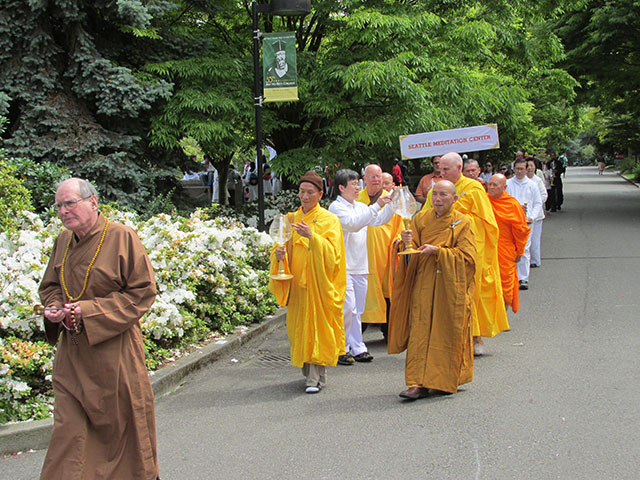 In 2013, monastics gathered at Seattle University, and led a procession through the campus, in honor of Vesakha.
Photos by: Bob Baumgartner, Steve Wilhelm

Next spring Northwest Dharma Association will support a series of conversations among Buddhist teachers, leaders, and practitioners, as part of the annual Vesakha Buddha day.

Our plan is to explore the challenging dynamics and wonderful opportunities available in the rich arena of Buddhist diversity. Vesakha, which celebrates the birth, enlightenment and death of the Buddha, is universally shared among Buddhist cultures. 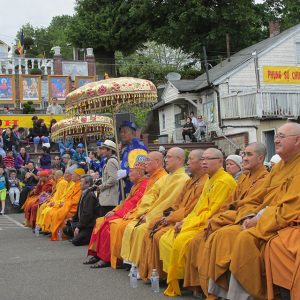 Co Lam Temple in Seattle supported a wider Vesakha celebration in 2014, tied to consecration of a statue of Buddha as a boy.

Northwest Dharma Association has co-sponsored Vesakha events over the years, bringing together diverse Buddhist traditions and cultures. We would like next year’s Vesakha events to be enriched by a series of dialogues, to explore the challenges and opportunities we face together.

Buddhists from every culture share some common inspiration and heritage, but there are lots of challenges. Here in the Northwest, even a decade ago, it could be a challenge to walk into an Asian temple and find someone who spoke fluent English.

Lack of common language is not the high barrier it used to be, but encounters between different Buddhist cultures still too often still cause withdrawing in ignorance, fear, and prejudice, rather than in befriending, learning, and mutual enrichment.

Sociologists have been calling those born into a Buddhist culture “ethnic Buddhists,” and those who have adopted Buddhism later in life “convert Buddhists.”

It gets more complex these days, since the son or daughter of a member of Shambhala or Insight Meditation Society (Western Buddhist organizations of mostly convert Buddhists) would by this definition be an “ethnic” Buddhist, while a practicing Buddhist born to Korean Christians might become a “convert” Buddhist. 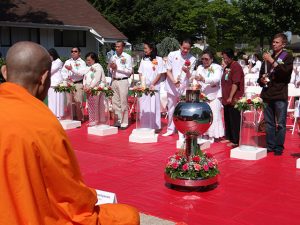 So all bets are off on who should be called what at this point. But there’s no doubt it’s a time of interesting encounters and relationships.

Over the past 25 centuries, Buddhism has adapted to many different Asian cultures, and in the past several generations it has spread around the world. Buddhist cultures that historically had little contact are now side by side.

In neighboring cities like Vancouver, Seattle, and Portland, it is not unusual for Tibetan, Thai, Chinese, Lao, Korean, Japanese, or Vietnamese temples to be found near Western meditation centers.

These are just a few of the potential topics that could be explored, but the final agenda will be shaped by those who participate — and you’re invited.

Some areas of dialogue to explore could be challenges for immigrants and religious minorities:

For those who “converted” to Buddhism:

The dialogues will take place in several Northwest locations during March and April 2017, leading up to the many Vesakha celebrations.

If you are interested in hosting or participating in one of the upcoming dialogues, you’re invited to contact George Draffan at george@northwestdharma.org.

0
SHARES
Share
Posted Under: 2016, Featured On Home Page, NWDA News, Winter
About the Author: George Draffan
George Draffan is a Seattle-based Buddhist practitioner, who teaches Buddhist meditation and Taoist energy practices. A long-time volunteer for the Northwest Dharma Association, he previously served as president from 2001 to 2005.