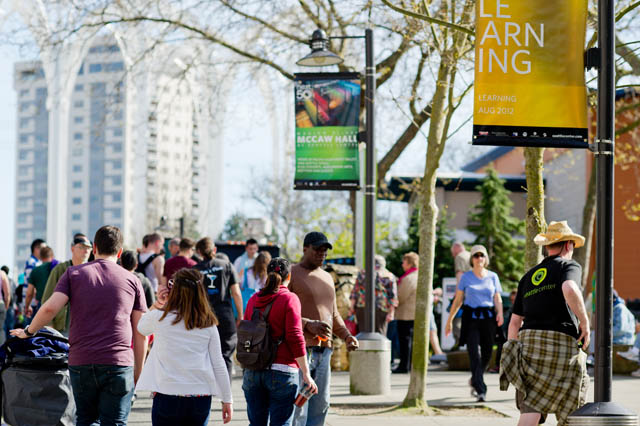 The Seattle Center, site of the 1962 Seattle World’s Fair, is a place where people gather from across the city, and where the monk panhandlers have been active.
Photos courtesy of Saddleburn Media LLC, Seattle Center, Seattle Meditation Center.

One of Seattle’s most famous tourist destinations has unwanted visitors: panhandlers dressed as Buddhist monks. 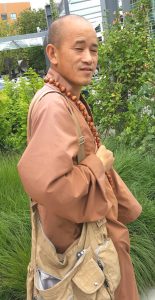 This man, dressed as a monk, was asked to leave Seattle Center after “aggressive” panhandling in June.

If the visitor doesn’t give money, the “monks” get aggressive. They stand in the way of the visitor. They pester, they follow people.

The story was first reported July 19 by KOMO news. In that story visitors said they were made to feel guilty if they didn’t give money. When a Seattle Center security officer came near one robe-clad panhandler he ran away, making the visitor feel he’d been conned.

“They are not real monks,” said Deborah Daoust, communications director for the Seattle Center.  “If you were a real monk, it would go against your principles to be doing this sort of activity.”

Daoust said the fake monks, a group of four men and one woman, have been given the “maximum exclusion,” a notice to keep off center grounds for one year. If they get caught on center grounds again, Seattle police could cite them for “criminal trespass.”

Another man dressed as a monk.

Detective Mark Jamieson, Seattle Police Department information officer, said he is aware of the group and that Seattle is not alone in having such activity. A quick Google search on “fake monks” pulled up stories about similar groups, with identical panhandling methods, in New York, Boston, San Francisco, Los Angeles and elsewhere.

In the High Line district of New York, it became so bad that a community group put up signs warning people of aggressive panhandlers in monks’ attire. A video by the New York Post shows three police officers taking to the ground a robe-wearing panhandler who had reached into the pocket of an undercover Amtrak cop in Midtown. A headline from the Washington Post reads “‘Aggressive and hostile’: NYC reportedly beset by an increase in fake monks scamming tourists.”

U.S. tourist areas are not alone in falling for the fake monk scam. Australia, Canada, India and Nepal also have their share of fake monk panhandlers, according to the New York Post. But the most numerous incidents are in China, where the International Business Times reports that a face-off between local officials and over 150 fake monks in 2010 made national headlines.

The fake monks stormed a police station and demanded the release of 31 already-detained fake monks. The story’s title: “China’s Fake Monks: Gangs Of Men Use Buddhism To Cheat Tourists.” 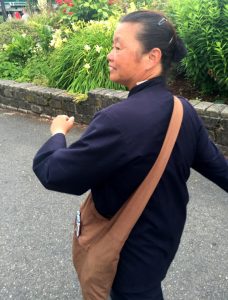 This woman, also dressed in monastic clothing, also was panhandling in June.

In Seattle, fake monk panhandlers were first noticed at the waterfront, another popular tourist destination. Their activities there prompted an earlier story by KOMO news.  After that, in late June, the group showed up at the Seattle Center, the 74-acre campus that includes Seattle’s iconic Space Needle. “This group of people is very persistent,” Daoust said.

While the Seattle Center respects the right to free speech and even allows for begging, it does not allow aggressive or intimidating behavior.

“If you don’t give them money, they stand in your way. They take out a sheet of paper that shows what the card cost, and they won’t go away,” Daoust said. “A lot of people don’t want to be rude, so they succumb to their badgering.”

Daoust said the group’s actions don’t “contribute to the sort of welcoming visitor experience that we want to provide.”

People in the Buddhist community, however, have another concern. They feel that people who are unfamiliar with Buddhism might get the wrong idea about monastics. 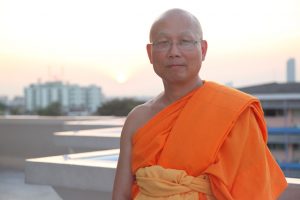 Venerable Manikanto Bhikku, a Thai monk who is abbot of the Seattle Meditation Center in Mountlake Terrace, said real monks don’t ask for donations, they just accept them.

“For thousands of years, monastics have lived lives of renunciation, and they live off charity,” said George Draffan, executive director of the Northwest Dharma Association. “It’s not only misleading, it’s the opposite of the impression that those guys are giving people.”

The fake monks never respond when asked about their temple affiliation. “Even if you could identify some temple that they’d be associated with,” Draffan said, “They’re not legitimate monastics.”

Venerable Manikanto Bhikku, a Thai monk who is abbot of the Seattle Meditation Center in Mountlake Terrace, north of Seattle, said the Buddha set up clear guidelines for monastics. The guidelines include a noble means for sustaining the monastic life. 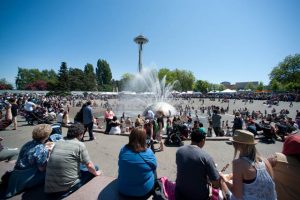 The Seattle Center’s International Fountain is a favorite gathering place.

“These people who dress likes monks, these fake monks, they use the form of Buddhism for personal gain. Even in Thailand, there are fake monks,” Manikanto said, adding that the trickery must be seen as separate from the true monastic life.

44
SHARES
Share
Posted Under: 2016, Fall, Sangha News
About the Author: Bob Baumgartner
The father of two kids, Bob Baumgartner works as the service manager for a fitness company. He enjoys the community and insights of friends at the Seattle Meditation Center.