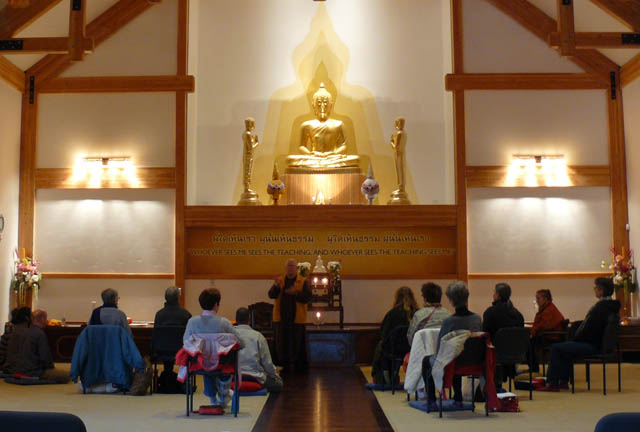 Nearly a dozen people gathered at Wat Atammayatarama Buddhist Monastery in Washington state this July, for the annual “Day of Mindful Recovery” retreat. 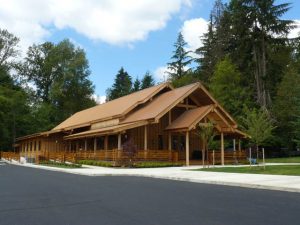 Wat Atammayatarama in Woodinville, supported by the Thai community, provided a venue for the event.

The retreats attract people from Washington and British Columbia, who are attending Buddhist-oriented or mindfulness-based support groups. Northwest Buddhist Recovery organizes the retreats to encourage these people to move forward with their meditation practice.

“As the event organizer for NWBR, I’m grateful for the collaboration that has developed between our organization and the temple,” said Debra Greenfield, event organizer for Northwest Buddhist Recovery, before the July event. “I am hoping some will find a refuge here as I did so many years ago, and experience the kindness and open-handed generosity of the monks and the Thai Buddhist community, at this sacred place.” 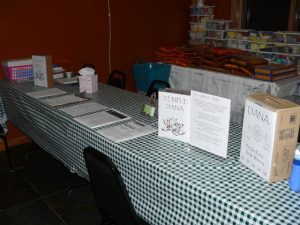 Nearly a dozen people registered for the 2016 version of the event.

Early on July 23 it was a beautiful sunny day at the monastery in the town of Woodinville, north of Seattle, as volunteers from Northwest Buddhist Recovery were getting ready for the daylong retreat. At 5 a.m., event organizers who had stayed overnight at the temple stepped out into the cool morning with their first cup of coffee.

Those who had stayed overnight joined the monks in their morning chanting.  There was a light breakfast, and Ven. Santidhammo and Ajahn Ritthi checked in with everyone to make sure they had everything they needed.  The welcoming attitude of everyone at the temple shone throughout the day, as the practitioners were provided with their needs so they could spend the day in noble silence and fully engage in their practice.

One of the volunteers arrived with a van towing the cutest little green camper, which was a big hit with Ajahn Ritthi, abbot of the monastery. He and resident monks had welcomed the volunteers the evening before, with evening chanting and meditation.

The day was similar to most daylong retreats. There are a few additions to tailor the day to those in recovery, but anyone is welcome and can benefit from attending. 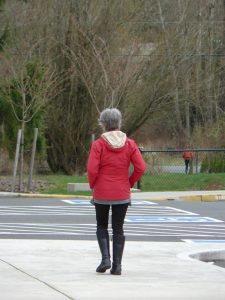 The groups gathered for the opening meeting, in which everyone introduced themselves by their first name and talked about what their expectations were for the day.  Ven. Santidhammo then took over and led guided sitting and walking meditation periods, offering instruction for each throughout the day.

The day was held in noble silence, and while this was unexpectedly difficult for some at first, they soon fell right into the peace and quiet.

After lunch Ven. Santidhammo offered a dharma talk under the trees, which he called “Working with Craving in our Meditation Practice.” He then led another session of sitting and walking.  At 5:30 p.m. we gathered for some gentle yoga instruction, led by meditation and yoga practitioner David, who prefers to use only his first name.

The day ended with another meeting, during which participants shared what they would bring home with them.  The overwhelming response to the day was appreciation of the support and sangha, and a renewed commitment to develop a daily meditation practice. 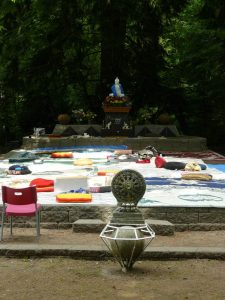 The outside practice area, under trees, set up for a dharma talk.

Almost everyone stayed to help clean up for the temple’s Sunday services the next day, and a few sat with the monks for evening chanting before heading back to their lives.

For some, the annual Day of Mindful Recovery is their first daylong mediation experience. The program is one of the few available tailored for those in recovery from addiction.

Many of those who attend these peer-led meetings are new to meditation, and only understand the basics of anapanasati, the traditional instruction for cultivating mindful attention to the breath.

As more people seek relief from the suffering caused by dis-ease in their minds and bodies, more support groups are being started to encourage development of mindfulness practices that can benefit all. 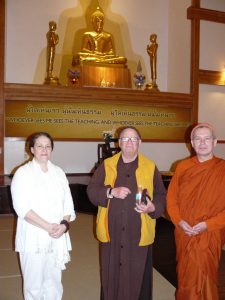 Ajahn Ritthi and the board of directors have long opened the temple doors for these Day of Mindful Recovery retreats. Since 2010 resident monk Ven. Santidhammo, often called Ven. Santi, has worked with us to develop a schedule specific to the needs of people working with addiction issues.

Ven. Santidhammo has led “Meditation for Recovery” workshops, offered dharma talks and led several of the Day of Mindful Recovery retreats at the temple.  Ven. Santi has a strong background in working with recovering addicts in Seattle during his 15 years as a journalist, and as a political activist focusing on human rights issues.

Ven. Santi currently visits prison inmates and works with them as a spiritual and meditation counselor, as well as supporting local Buddhist recovery meetings and events.

As the event organizer for Northwest Buddhist Recovery, I’m grateful for the collaboration that has developed between our organization and the temple.  I’m also grateful for the opportunity to once again introduce fellow meditation practitioners to the place where I took my first Buddhist precepts, have celebrated pujas and Sunday services, and have attended summer and fall meditation retreats.

0
SHARES
Share
Posted Under: 2016, Compassionate Action, Fall
About the Author: Debra Greenfield
Debra Greenfield has been a dhamma student and practitioner of Buddhist meditation since 2005. She currently leads “Meditation for Recovery,” facilitates training workshops, supports new meeting growth and organizes events for Northwest Buddhist Recovery. She also sits on the board of the Buddhist Recovery Network representing Northwest Buddhist Recovery. Her published works include NWBR newsletters, a facilitator training workbook, a Buddhist-oriented recovery educational brochure and assorted articles on Buddhism and recovery. Greenfield founded Northwest Buddhist Recovery in 2012, with the goal of supporting the local Buddhist recovery community with a resource website, and by organizing events with Buddhist recovery authors and teachers. She lives and practices in a tiny cabin on a mountain pass in Sumas, Washington, with her husband and four chickens.