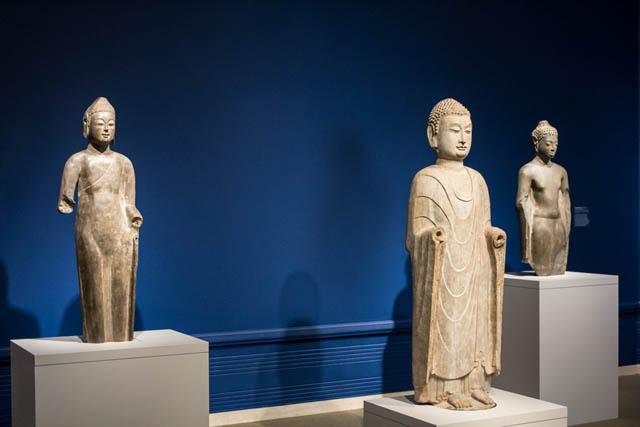 Three standing Buddhas, made of limestone and marble, from China and Thailand, are as old as the sixth century.
Photos: Courtesy of Seattle Art Museum: Eugene Fuller Memorial Collection, Monsen Family gift.

Seattle’s Asian Art Museum is displaying 20 images of historic Buddhas in its new installation, “Awakened Ones: Buddhas of Asia.” 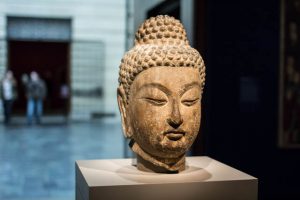 This head of the Buddha, from the early 8th century, was made in China of limestone.

The installation is currently on view at the Asian Art Museum in Capitol Hill’s Volunteer Park, until the end of February 2017. Then the museum, a unit of the Seattle Art Museum, will temporarily close for renovations. The pieces come from Seattle Art Museum’s own extensive collection.

“Awakened Ones: Buddhas of Asia,” showcases sculptures and works of multiple Buddhas. These include the future Buddha Maitreya, the western pure land’s Amitabha Buddha, and the cosmic and transcendent Vairochana.

The exhibit includes Illustrations of narrative scenes and the Buddhist paradises, which viewers can utilize to help visualize themselves within the pure lands. 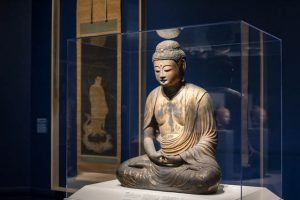 This seated Buddha was made in Japan of wood coated with gold lacquer, in about 1130.

The installation features 13 centuries of sculptures and paintings from around Asia, including Japan, China, Korea, Nepal, India and Pakistan. These statues and images supported the Buddhist practice of people at the time they were made, and promoted the goal of karmic advancement.

The exhibit is rooted in the life of the Buddha, who came of age as the heir apparent of the Shakya clan. This was an elite family that lived in what is now northern India, around the 6th century BCE. 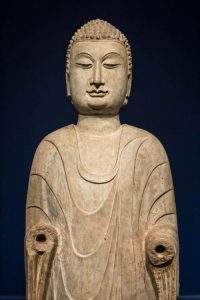 A standing Buddha from China, made of marble, from the late 6th century.

Renouncing his life of privilege and leaving the palace, the young man ultimately awakened to the realization that anyone could escape the cycle of reincarnation and be freed from suffering.

As Buddha’s teachings spread around the world, so did early Buddhist art. The first Buddhist art was non-representational symbols and relics of the Buddha, before his image appeared in the form of portable votive icons.

In northern Asia, Mahayana doctrines of universal salvation gained great prominence. Chan and Zen Buddhism created a pantheon of compassionate Buddhas who presided over paradises, as well as bodhisattvas who assisted the Buddhist practitioners in their quest for liberation. 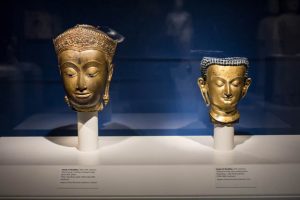 Two gilded bronze Buddha heads, one from Thailand and the other from Nepal, from the 17th century.

The “Awakened Ones: Buddhas of Asia” exhibit was put together by the Foster Foundation Curator of Chinese Art, Ping Foong.

Foong is a leading scholar of Chinese art and a specialist in Chinese ink painting, who was appointed to the museum in 2015. Foong will oversee the development, presentation and care of SAM’s extensive collection of Chinese art.

She will conduct research and organize exhibitions of both historic and contemporary Chinese art, building on the museum’s focus to foster connections between past and present.