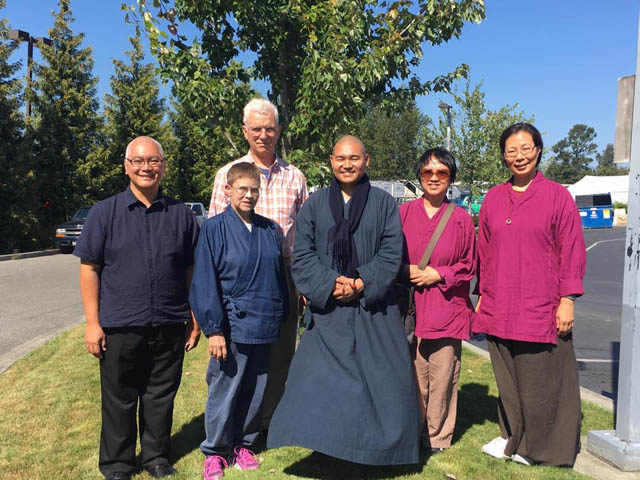 Just-released prison inmates are struggling to find housing in the Seattle area’s white-hot housing market, while Buddhist supporters and others try to help them, before and after release.

The vast majority of inmates in Washington state release into King, Pierce, or Snohomish counties, where skyrocketing rents and low vacancy rates create a perfect storm of housing issues. 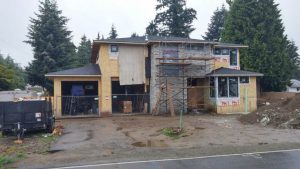 Around the Seattle area developers are tearing down perfectly fine houses to replace them with larger and more expensive homes, driving up housing prices.

Seattle is the worst, with an average apartment rental over $2,000 a month, one of the fastest growing in the nation.

This amount dwarfs the Washington state Housing Voucher Program for eligible former inmates: just $500 a month for no more than three months.

Housing is the first and most important need, for former convicts to successfully re-integrate into society after prison.

To give a sense of scale, the United States’ 2.2 million people in jail is the highest of any nation, according to the London-based Institute for Criminal Policy Research. Each week 10,000 inmates are released nationwide. 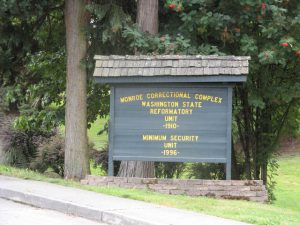 The gate to the Monroe Correctional Complex, in Monroe, Washington.

It is only with a stable address and the security provided by housing that a person can look for work and keep up with treatment programs. Former inmates finding jobs and staying clean and sober are the two factors, beyond housing, that most predict successful re-entry into society.

Each inmate must be released to a state-approved address, but this may be quite tenuous and temporary – a relative’s couch, for example. Nationwide an estimated 10 percent of recently prisoners still on parole are homeless, while in cities and among those actively using drugs, the percentage triples.

On the brighter side, we are very fortunate here in Washington state to have Buddhist volunteers currently going into almost every prison on a regular basis, providing support for sanghas inside. But we can always use more who are willing to commit to regular attendance over a period of time.

There are several local transitional housing programs run by nonprofits, which fill a very important need.

Often these more affordable (but temporary) options are clean and sober houses, which provide needed support for remaining drug-free. But these housing programs are often run by Christian groups, which means members of minority faiths, such as Buddhism, sometimes struggle to find the spiritual support they need. 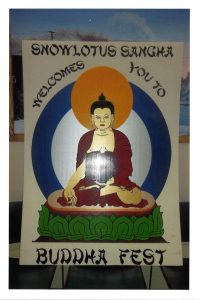 A sangha poster made by inmates at the Twin Rivers Unit.

It is very important for all faith groups to provide spiritual support for released prisoners, welcoming them into their spiritual centers and forging meaningful connections after release.

Ex-felons are not a federally protected class, and often end up at a disadvantage when looking for housing. Only a few states offer some protections for ex-felons, and some public housing programs will not accept anyone with a record, even for non-violent offenses.

A complicating issue is that the prison system has become a de facto mental institution, due to the lack of adequate community resources to treat major mental illness.

One former inmate I know from Monroe Correctional Complex, who suffers from mental illness, quickly ended up on the street upon his release. He was re-arrested, placed at the county jail to await sentencing, and eventually was sent back to Monroe.

This person, who I’ll call “M,” has now has been released from Monroe again.

But before he was released M shared with me some of his fears. He said he was concerned about ending up homeless, and vulnerable to reverting to the behaviors that got him arrested in the first place.

M also expressed to me that he is afraid when he is on the street. He is even relieved to be back in prison, knowing he will be fed, clothed, and housed, and will receive the medications that keep his scary internal voices at bay. He is one of many in this situation. 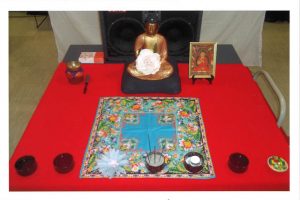 A prison rice mandala from Buddhist festival, after chanting.

For those Buddhists among us who volunteer in prisons, consistency is critical.

While we offer access to dharma study, it is through our commitment to show up and practice together that we can make the most difference.

In addition, each Buddhist prison group is allowed one celebration a year to which family, friends, and community members are invited, as well as other special programs.

The Venerable Tsering Motup came with several students affiliated with International Bodhisattva Sangha, a Taiwanese group based in San Diego that focuses on outreach to prisons. 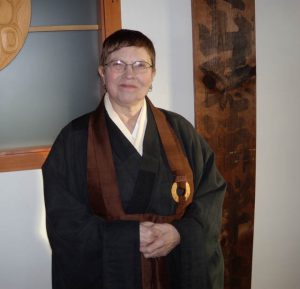 Rev. Genko Blackman, a leader in supporting the dharma needs of current and former prison inmates.

They are currently active in California prisons and have recently begun expanding to other states and Canada. They very generously have donated a set of Buddhist books to each of the prisons in Washington state, for the use of Buddhist inmates.

It was a joy to be able to spend two days with Ven. Tsering at Monroe Correctional Complex, where he visited four of the five facilities.  He also visited Olympic Corrections Center in Forks.

While not a Buddhist group, Seattle-based Freedom Project leads an ongoing program in non-violent communication and mindfulness at Monroe Correctional Complex and at Washington Correctional Center for Women.

Freedom Project also has community programs for releasees. They can always use more volunteers.

There are concrete needs for housing and employment, or education to improve former inmates’ chances of making a living wage. Assistance in managing addictions is critical, such as welcoming releasees into 12-step groups.

There is a great need to educate those in the community to build support for each of these factors of success. The key point is that we are connecting, not helping. This is a sharing of our practice rather than some form of charity, both inside and out.

These are members of our community, no less than anyone else, and we bear responsibility for their well-being as an integral part of the well-being of the whole.

0
SHARES
Share
Posted Under: 2016, Fall, Prison Dharma
About the Author: Genko Blackman
Genko Blackman is ordained in the Rinzai Zen tradition and trained at Dai Bai Zan Cho Bo Zen Ji. She is now a student of Dzogchen Ponlop Rinpoche at Nalandabodhi Seattle. She currently serves as Buddhist representative to the Religious Advisory Committee of Washington State’s Department of Corrections, along with Fa Hsing Jeff Miles. Please contact for more information on how you can help: genkokb@gmail.com.