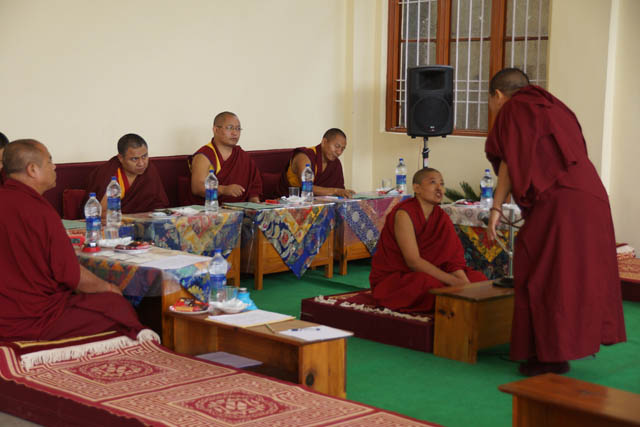 Nuns debating in front of the geshema examiners. The geshema examination process is an extremely rigorous one that takes four years, with one round per year each May.
Photos: Courtesy of Tibetan Nuns Project

Twenty Tibetan Buddhist nuns recently succeeded in earning  the equivalent of doctorate degrees, the first Himalayan-born women in their tradition to do so.

Their achievement, a momentous advance for women within Tibetan Buddhism, might not have happened without support from Tibetan Nuns Project, a non-profit with offices in Seattle and in India. 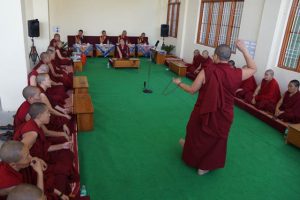 The debate or oral examination is an important part of the geshema exams. The nuns are examined on the entirety of their 17-year course of study of the Five Great Canonical Texts.

Seven of the 20 nuns have been directly supported by Tibetan Nuns Project, during their 17-year scholastic journey. The organization, also known as TNP, has been broadly supportive of nuns receiving better educations than has traditionally been the case.

What’s called a “geshema” degree will be formally conferred to the 20 nuns in December, by the Dalai Lama at a special ceremony at Drepung Monastery in India.

As geshemas  the 20 nuns will then be equal to male geshes, the doctorate-level monks who have traditionally maintained the scholastic standards and traditions of the Gelugpa school of Tibetan Buddhism. Monastics have to study for up to 20 years, to be prepared to pass the arduous four years of examinations.

While the individual accomplishments are admirable, the social implications for the Tibetan community is massive. In addition to the usual reverence the monks and nuns typically receive from the community, a Geshema degree will give the nuns public recognition for their achievement and knowledge of Buddhist teachings. This will in turn inspire people’s faith in the nuns as equally qualified as males, to be teachers and masters of the Buddhist texts. 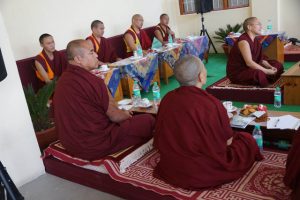 One of the 20 senior nuns taking her fourth and final set of geshema exams in May. During the 12-day exam period, the nuns must take both oral (debate) and written exams. The examiners watch as the seated nun takes part in a debate with a standing nun.

This status potentially will accord them a level of influence much like the high male lamas, where they will be able to attract their own followings and thus patron donors for their nunneries.

Their success fulfills a long-standing wish of the Dalai Lama, and marks a new chapter in the education for ordained Buddhist women.

In addition to the seven Tibetan Nuns Project graduates in 2016, another 17 TNP nuns are expected to win geshema degrees over the next two years.

“Their perseverance is phenomenal,” said Lisa Farmer, executive director of Tibetan Nuns Project, about the nuns’ efforts to win geshema degrees. “The nuns have really led that…They came to us and led the charge, and we’ve just been fortunate as supporters and advocates of their energy and movement.” 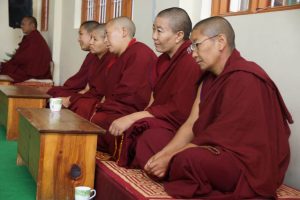 Four nuns watch as other candidates debate as part of their oral examinations.

In the spring of 2012, the Tibetan Government in Exile’s Department of Religion and Culture decided to allow Tibetan nuns for the first time to take the examinations to obtain the geshema degree.

The roots of the geshe and geshema degrees can be traced back to the ancient learning center of Nalanda University in India.

Created in 1987,  Tibetan Nuns Project is a nonprofit organization that raises and coordinates funding to support more than 700 nuns in eight nunneries in India.  The largest of the nunneries are Dolma Ling and the Shugsep Ling.

The organization supports nuns via a combination of individual sponsorships and funding for the nunneries’ buildings and programs. Despite the small size of the Seattle office, it does most of the heavy lifting in terms of outreach and fund-raising for the nunneries. Sponsorship support comes from around the world, most of it from the U.S. It is fitting that the organization’s Seattle office’s executive director has a strong sense of feminism, and  a master’s degree in education. 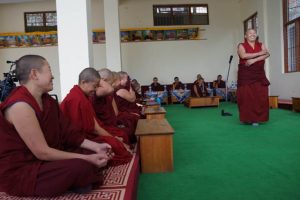 A moment of joy during the rigorous geshema exams.

“The focus on education, and a program looking to empower women and self-sufficiency,” were among the primary reasons why Farmer took the job as executive director four years ago, she said.

Farmer said she’s proud to work in a place “Where the people themselves and their work are more powerful than the organization.”

The completion of the exams this year was only the latest in a series of tests. Each spring for four consecutive years, starting in the spring of 2013, the nuns were required to take two weeks of written and verbal examinations.

As they faced the exams the nuns had to rely on their 17-year study of Buddhists texts, and their own realization, to pass the examinations. The testing included a series of dramatic debates during which they were challenged by some of the most learned monastic teachers.

The nuns’ achievement is particularly remarkable given that many of the nuns were illiterate, and could not even write their names, when they escaped Tibet in the late 1980s. 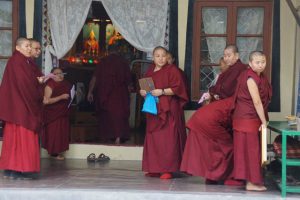 Nuns about to enter the geshema exams. A total of 44 nuns from nunneries in India and Nepal took various levels of their exams in May. All passed.

Many of the women arrived in India without any money or possessions, after long, arduous and dangerous journeys over the Himalayan Mountains. Some of them had been imprisoned and tortured in Tibet by the Chinese.

Ven. Tenzin, one of the nuns sponsored through TNP, came from central Tibet and now lives and studies in Dolma Ling Nunnery.

In Tibet Tenzin and her six siblings helped care for their family’s animals and fields, which required that she leave school at age 12. Determined to become a nun and pursue Buddhist studies, like many before her she escaped from Tibet across the Himalayas, hiding during the day to evade capture, and walking at night for 26 days. Little did she know what she would end up accomplishing in exile.

Receiving their geshema degrees will place the nuns in leadership roles, in monastic and lay communities typically dominated by their male counterparts. 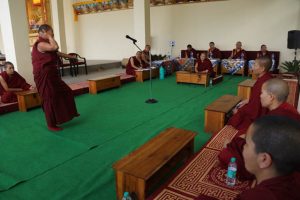 In Tibetan Buddhist debate, the challenger uses her right hand to raise up her prayer beads around her left arm. This represents the fulfillment of the efforts of compassion, in lifting up all suffering beings out of the round of rebirth.

This will be a significant change because in the hierarchy of the typical Tibetan gathering, religious or not, male lamas and monks typically assume a leadership role. They either are the main guests, they are seated in the main area, or they are accorded the most reverence and thus command the audience’s attention.

Tibetans are used to seeing a male monk or lama at the head of the table, and accustomed for those males to speak or preach to them.

The Geshema degrees will give nuns similar leadership roles of in the community. In turn this means the nuns will bring a fresh perspective, a woman’s perspective, to their discourses.

His Holiness the Dalai Lama has often been quoted saying that scientific research indicates women are more warm-hearted than men, with more sensitivity and concern for others. He adds that kindness and warm-heartedness are going to be the key factors molding the future of the world.

He has even shocked the world by suggesting a possible female Dalai Lama.

The Dalai Lama has long advocated for the inclusion and importance of a role for women in all seats of Buddhism.

0
SHARES
Share
Posted Under: 2016, Dharma Education, Fall
About the Author: Jamyang Dorjee
Jamyang Dorjee is a Tibetan Buddhist living in Bothell, Wash., with his wife and two children. He is a former president and board member of the Tibetan Association of Washington. He volunteers as a teacher at the Tibetan Sunday Language & Culture School, and sits on the school's steering committee.