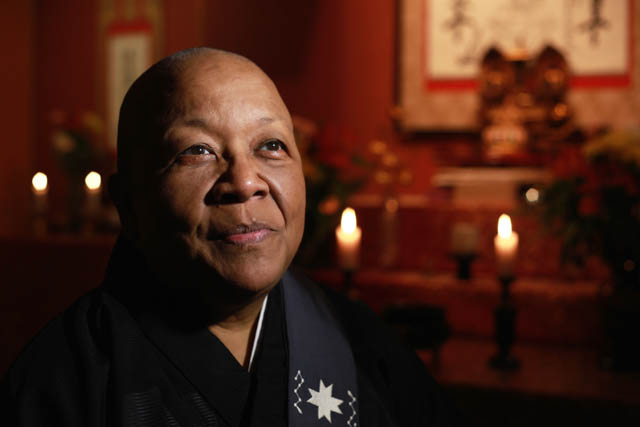 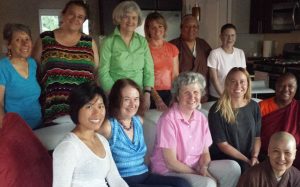 Women from many traditions gathered at the event, and supported one another.

Special guests included Venerable Dr. Pannavati, an ordained Theravadan nun with experience teaching in multiple traditions; and Reverend Myokei, the first western female bishop in the Nichiren tradition. The two women flew in from North Carolina and Texas respectively, to join this circle and other activities.

The women agreed to change the things they know they can change. They agreed to take on personal action items such as speaking their minds and being more courageously vulnerable. During this preliminary phase, they agreed to learn more about being in dialogue with other Buddhist women.

While the ratio of Buddhist female teachers in contrast to Buddhist male teachers remains low, there are now more opportunities in the West, than was historically the case in Asia, for female teachers to offer the dharma and to lead groups of women and men. 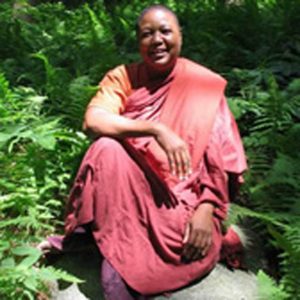 As Buddhists, the women who gathered came to the conclusion that the true dharma, the luminous source of wisdom and compassion, is genderless and boundless. This sublime state of being may be accessed individually as one wishes, or kept in mind as an ideal for all of humanity to strive toward. By being in circle with other women, Buddhist women may sample, for a time, the genderless state of being that is our shared spark.

The women conversed from 6 p.m. until after 8 p.m., in large and small circles, starting with an invocation and ending with a dedication.

While Venerable Pannavati reminded the circle that the true dharma is beyond gender, and Reverend Myokei reminded the gathering that being is gender-free, the fact of daily life is that gender is a predominant social conditioning. Patriarchy, inequality, and inequity do pervade conventional reality, based on gender, ethnicity and class.

Sometimes women have to defend the usefulness of women’s circles by making explicit statements about why men are not included. The topics of whether and how men may participate in these circles enter often. 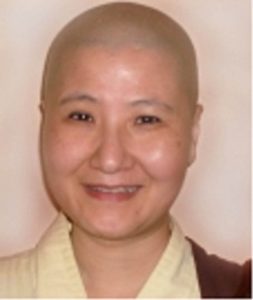 Guo Cheen explained that she is reminded of the genderless boundlessness better by being in circle with only women, in that such circles make it easier to set aside the habit of noticing someone’s gender. Rarely are we in dharma or social circles simply as human beings. Gender, ethnicity, class, and other characteristics cause the mind to consciously or unconsciously differentiate.

Joanne told the group that she looks forward to being among Buddhist women, as it appears to offer support in her spiritual growth. The teachings of the Buddha have helped her heal from parents who weren’t too nurturing, she said.

To invite men to join women’s circles, while the women are still building trust and understanding amongst themselves, may be premature. The question can of itself demonstrate the irony of a habit of defaulting to patriarchy. Must the focus always be on men?

Commonality does not equal ignoring distinctions such as gender, ethnicity and class. In fact, commonality can turn dangerous when it leads to exclusion, such as with white supremacists. However, sharing experiences based on similarities such as being a woman, being a person of color, or being jobless or homeless for a time, can only uplift all of humanity. 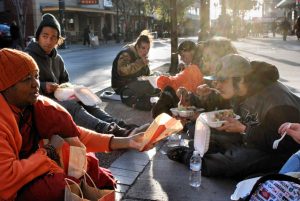 Venerable Dr. Pannavati is known for her work with less privileged people.

Other interesting wrinkles in this circle’s discussion also included observations that are subtly ironic. For instance, women may wish to go beyond gender by inviting men into women’s circles, while simultaneously naming women as the cause of patriarchy.

Naming women as a cause of patriarchy can be understood in different ways. The more Buddhist interpretation may be how each of us is responsible for our circumstances, micro or macro. From this viewpoint each of us is responsible for, and is the cause of, existing conditions and social order. In this sense women, and men, both contribute to the presence of patriarchy.

A less-fair interpretation may be that women’s behavior, be it sycophantic behavior or willing compliance, sometimes creates patriarchy. This line of thinking is a bit too similar to the argument that sexual assault victims invite their perpetrators’ acts because they dress in a certain way. This is an argument women are not and should not be comfortable with.

Until women can operate in the world where all beings cease to make distinctions based on gender, women will benefit by being in circles of women.

During this initial meeting among diverse and relatively progressive Buddhist women, good intentions and paradoxical logic prevailed while participants struggled with some terms. 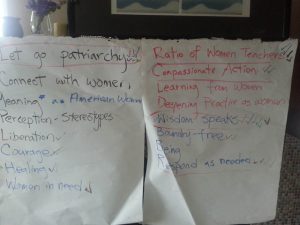 The gathered teachers brainstormed many ideas.

The women explored definitions of gender, patriarchy, matriarchy, feminine characteristics, masculine characteristics, similarities and differences between men, women, and a spectrum of gendered individuals. The women were trying to reach common ground at the basic level of language so they could move forward by fully hearing each other. They were learning from each other.

Female Buddhist teachers offer unique guidance and experience. The wisdom of these women will help other Buddhist women across traditions to dialogue about wisdom, compassionate action, and women’s responsibilities in the typically patriarchal Buddhist community, and perhaps across other communities.

The Buddhist women’s circle will convene at a local Buddhist venue every other month. The next circle will be the evening of October 18 at Nalanda West in Seattle. Details will be posted on the Northwest Dharma website.