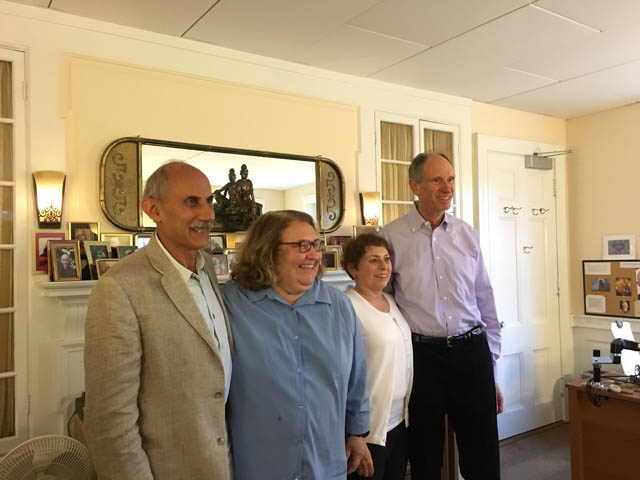 This July, my daughter Erica Mandell and I drove the long tree-lined Pleasant Street in Barre, Massachusetts, for the 40-year reunion of the founding of the Insight Meditation Society. 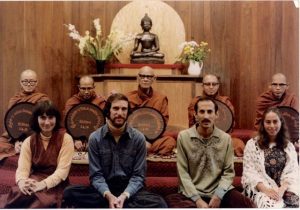 IMS, as it is commonly called, is a large retreat center an hour and a half west of Boston. This is where I for more than seven years lived and taught the practices of mindfulness meditation, also called insight or vipassana mediation, during the early years of the organization.

I had been invited to enjoy and participate in the day-long reunion festivities, which included guided meditations in the meditation hall by my friends and former colleagues Joseph Goldstein, Jack Kornfield and Sharon Salzberg.

Joseph, Sharon and I had first met as meditation students in Bodh Gaya, India, at the Burmese Buddhist Vihara in the very early 1970s. Now we were sharing a moment we could never have envisioned, celebrating the joyful 40-year reunion of an international meditation center.

One of the first people I ran into when my daughter and I arrived was Seattle Insight Meditation Society Founder Rodney Smith. All of us were in pure reunion mode, laughing and happy to see each other after many years.

Rodney had never met my daughter, and he commented about how much she looked like me. I was glad Erica could attend this reunion as my other daughter, Chloe, was getting ready to travel to Brazil to work at the Rio 2016 Olympics.

During the reunion I saw so many people whom I had taught, or who had been on staff at IMS while I was teaching there.

One of those I had taught was Winnie Nazarko from Seattle, now a teacher at the Forest Refuge, a retreat facility adjacent to IMS for longer-term students. I had the opportunity to catch up with Winnie during lunch, and was delighted to see how she has grown into being a fine teacher. 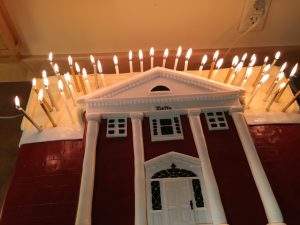 The 40th birthday cake, shaped like the entrance to the primary IMS building.

On July 9, a delicious lunch of Asian-inspired dishes filled 10 tables put together diagonally in the IMS dining room.

Outside was a huge cake in the shape of the main IMS building facing Pleasant Street, as well as cookies graced by the word metta.

Metta (loving-kindness), is the word that greeted each yogi and yogini who entered the front door of IMS over 40 years. During my time there I lived in a large room with windows that looked out onto Pleasant Street, facing in the same direction as the metta sign.

As with any successful reunion there were a few hundred people who could not stop happily talking, and catching up. We were reminiscing and appreciating each other, as well as the glorious dharma that has spread so gracefully around the world since the opening of IMS. 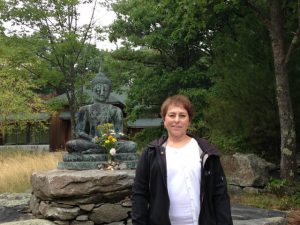 During the weekend we all reminisced about the great teachers who blessed IMS and gave teachings there. Over the years these included the 14th Dalai Lama, the 16th Karmapa, Ajahn Chah, Mahasi Sayadaw, Dipa Ma and Taungpulu Sayadaw, to name just a few.  I had the good fortune during my time at IMS to be actively involved in co-hosting each of their visits.

On Saturday afternoon of the reunion I was invited to speak during the presentations and celebration event, held in a large tent to the side of the main building. Each of the seven speakers recollected the early beginnings of IMS, when the idea of a retreat center was so new nobody knew if it would last. 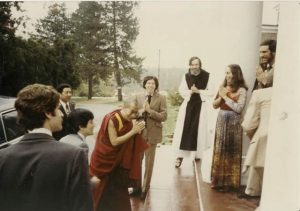 Mandell greeting His Holiness the Dalai Lama, in 1979.

The story I shared was about greeting The Dalai Lama upon his arrival in 1979, at the front entrance at the foot of the large columns. A photo in IMS’ upstairs walking hall captures this moment.

I asked my daughter Erica to reflect on what the experience of the IMS reunion weekend was like for her. This is what she wrote:

“It’s not often that you get to hear about when and where your parents met, the origin story of an infamous retreat center and humorous tales from the titans of Western Buddhism all at the same time, but this was my experience. The reunion weekend brought that era to life. I could picture my parents and their friends running around laughing, meditating and having a good time. It was very sweet for me to think about, especially given the impact IMS has had on so many people since then.”

A long and winding evolution

My teaching journey began soon after I returned from meditation training in India, Burma, and Thailand, from 1971 through 1974.

After returning to the U.S. I co-managed the Dharma Vihara in Felton, California, where some of the early thinking started that led to IMS.

After that I was invited to assist in teaching dharma with Dr. Rina Sircar, a Burmese teacher, scholar and healer who was a disciple of Burmese Buddhist master and monastic Taugpulu Sayadaw. Rina Sircar  taught at what is now the California Institute of Integral Studies, in San Francisco.

Soon after, my fellow meditation students and colleagues invited me to teach with them at the Lama Foundation in Taos, New Mexico. I then moved to Barre to teach worldwide through the Insight Meditation Society.

In 1979 I was authorized to teach by Mahasi Sayadaw. Many are familiar with the photo taken at IMS of that authorization ceremony, which also included Joseph Goldstein, Jack Kornfield and Sharon Salzberg. 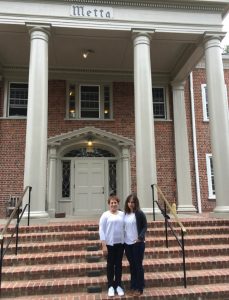 Mandell and her daughter Erica Mandell.

Rinpoche requested that I teach the many facets of compassion in  the foundational practices known as the Longchen Nyingthig Ngondro. These practices open the way to recognizing our innate mind of enlightenment.

In addition to teaching classes and retreats, Samden Ling has had the blessed opportunity to bring prominent teachers of the Longchen Nyingthig Lineage to the Pacific Northwest.

People can sign up on the website for the Samden Ling newsletter, which announces teachings and ways to participate.

Recently we added a new teachings tab to the Samden Ling website , to link to a growing list of dharma talks on Samden Ling’s new You Tube channel.

Dharma at Samden Ling is inclusive, engaging and harmonious. Samden Ling welcomes participation in meditative practices, and invites those with talents in management and social media to contribute those talents. Contact is info@samdenling.org.

0
SHARES
Share
Posted Under: 2016, Compassionate Action, Fall
About the Author: Jacqueline Mandell
Jacqueline Mandell was one of the original teachers at Insight Meditation Society in Barre, Massachusetts, in the late ‘70s. She also is a founding teacher of Samden Ling in Portland, and currently teaches weekly classes in sitting practice and Longchen Nyingthig Ngndro. Samden Ling was founded by Adzom Rinpoche in 2000. She is the outgoing executive director after 16 years.