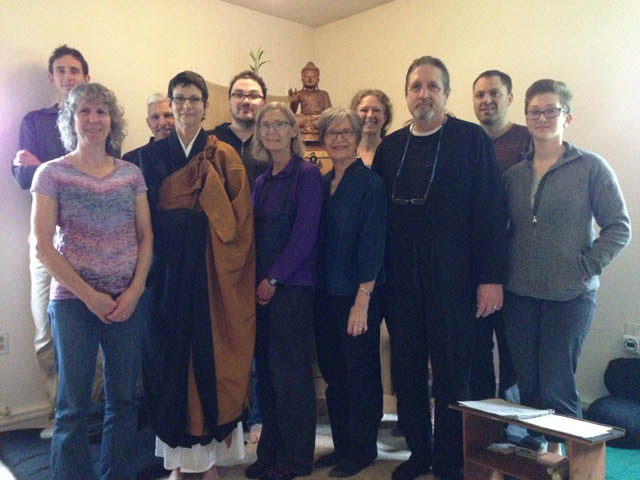 The Anchorage Zen Community is acknowledging its 30th anniversary this year, after evolving in an Alaskan city better known for snow and oil workers than Buddhist groups.

The not-so-large sangha, with about 20 regular members, offers a regular program of zazen, the meditation practice common to Zen tradition.

The biggest weekly event is a Sunday morning service, which includes periods of sitting zazen, walking meditation called kinhin, and a dharma talk.

We also offer morning zazen sessions on Mondays, Wednesdays, Thursdays and Saturdays, plus an evening session on Thursdays.

For elementary school-age children we offer a monthly dharma school that includes a generosity ceremony, stories, and occasionally rituals like bathing the Buddha. We practice meditation with the children, but only for very short periods. 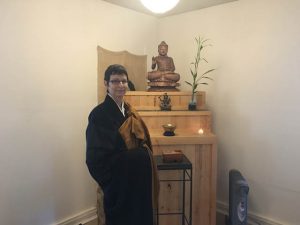 Priest Genmyo Zeedyk has served the Anchorage Zen community since 2012.

We visit men’s and women’s prisons and share the dharma with inmates.

Since 2012 we’ve been led by resident Priest Genmyo Zeedyk, who relocated to Anchorage to begin her priesthood vocation with us.

She was ordained in Japan by Itabashi Zenji in 2009, and received dharma transmission in 2013 from Niyama Roshi, who is based in Japan.

It is fitting for us that Zeedyk identifies with the practices of Katagiri Roshi as one of her root-teachers, because in 1984 he was the first Zen teacher to visit our center.

Additionally, Zeedyk trained with teachers in Aitken Roshi’s lineage. In 2006 Jack Duffy Roshi made her an associate teacher in the Diamond Sangha.

These days the Anchorage Zen Community practices in a small renovated garage, the result of a downsizing when we had no regular teacher between 2008 and 2012. This space has allowed us to match our needs and revenue flow. 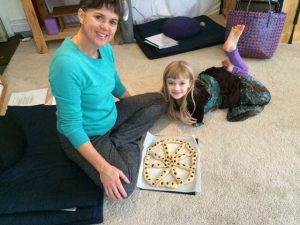 Caitlin Douglas and her daughter made a dharma wheel from dough, now ready for baking.

We of the Anchorage Zen Community feel fortunate to have been blessed with the presence of many teachers over 30 years, who were willing to bring the dharma to Alaska.

Anchorage is at once an exotic place of nearby spectacular natural beauty and a congregation of human commerce perched atop a shifting earth.   To those of us who have ventured north, Anchorage has often been a place of opportunity where we can create unique forms that parallel our pre-Alaskan lives.

Thirty years with the Anchorage Zen Community seems so brief from this writer’s perspective, having been part of the original group that first sat together nearly 40 years ago.

I am sometimes curious about impressions that remain with each of the several hundred people who have passed through our doors over these many years.    I feel blessed for the dozen or so regulars who have formed the core of our community, and who remain connected through participation or occasional visits.

More than 30 years ago, several transplants to Anchorage began weekly sittings.   A small core of committed meditation practitioners would sit together, and often discuss our respective practices with one another.   We came from varied traditions:  Tibetan Buddhism, Aitken Roshi’s Diamond sangha in Honolulu, the San Francisco and Minnesota Zen communities, Thich Nhat Hanh’s teachings. Some of us had found instruction through readings in multiple traditions. 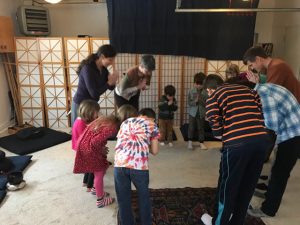 Children gather at the zendo for a generosity ceremony, in which each child offers a personal item on the altar, then bows.

As we continued to sit together, a collective energy crystalized to invite teachers to Anchorage.   Among the first to accept our invitation was Katagiri Roshi of the Minnesota Zen Meditation Center.  In 1984, he and one of his assistants came to share their practice with us.

To our amazement some 50 people came to our hastily assembled sesshin, to sit zazen with Roshi and our small group.

This initiation to Katagiri led to an on-going relationship with the Minnesota Zen Center. Two or three times a year, Katagiri or one of the priests from the Minnesota center would journey north for three to seven-day intensives with our growing sangha. 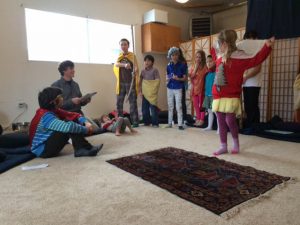 A group of children enact the Siddhartha and the swan story, from the Buddha’s childhood.

By 1986 our small group had grown in size and membership.  Several members decided to formalize into a legal entity with a board of directors, bylaws, and a commitment to create an ongoing center to practice Zen, much in the tradition of Katagiri Roshi’s Soto Zen practice.

This decision had several significant implications for our informal group. Several members for instance decided to break off and create other groups, to support their preferred practices.

Several members began an organization that practiced in the lineage of a Tibetan teacher.   Others affiliated with other teachers or traditions.  As all of us deepened our practices, many of us pledged more time, money, and effort to grow our fledgling organizations.

Looking back over 30 years, one could focus on the flood and ebb of membership, the various transformations of ritual, the often-tenuous flow of money to support the practice, or the various locations that have been our home.  Instead, I choose to reflect on the teachers who have served our community. 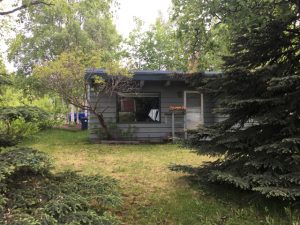 The Anchorage Zen Center has transformed a former garage into a practice place.

From 1986 through 1996 we hosted several different priests ordained by Katagiri Roshi, in twice-yearly intensives for our extended community in Alaska.   Often practitioners from across Alaska would journey to Anchorage to participate in these intensives.

In addition to hosting retreats, we established a practice center for frequent sittings.   Over years the center operated in converted garages, basement family rooms, living rooms, psychologists’ waiting rooms, and yoga studios.   Our portability was impressive: We were able to fit 20 zafus and zabutons, a small altar, and chant books all in one large van. 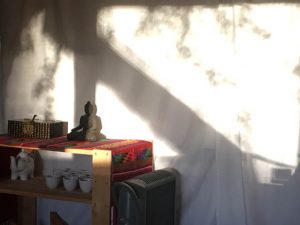 The shrine room, a shaft of sun.

From 1996-2001, Tozen Akiyama served as our resident priest.   Akiyama offered to live in semi-retirement in Anchorage after relocating from the Milwaukee Zen Center.

He shared his practice with our Anchorage Zen Community for about five years, allowing us to offer more group practice opportunities.

Upon announcing his retirement, Akiyama recruited Koun Franz to relocate from Japan to Anchorage in 2001, to become our resident-priest.   Koun Franz had been studying for the priesthood in Japan for several years, and his wife Tracy had previously lived in Anchorage and was familiar with our culture and climate.

From 2001-2006 Franz served as our resident priest.   During his tenure we doubled in size to about 30 members, which required a larger practice space. 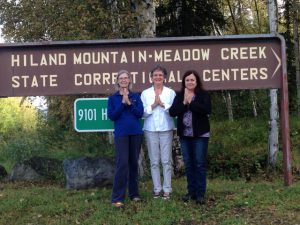 We eventually rented a house that provided living quarters for Franz and his wife, and sitting spaces for about 30 practitioners.  In addition to daily sittings Franz created several study groups, and introduced our sangha to rituals and practices from his years of monastic training.

After Koun Franz left in 2006, our sangha looked at various teacher-arrangements.   These included a six-month contract with one teacher, and a few months with another, Shogen Danielson from the San Francisco Zen Center.

During years of no-residential-priest, we continued to rent a full-time space for our practice. We continued to offer daily sittings, and on Sunday mornings we either heard talks from volunteers, or from recordings.

Now with a teacher guiding us, the community is growing again.
Our tradition is this simple and profound practice of “just sitting,” which as Katagiri Roshi always emphasized, is “nothing special.”

I am grateful for his practice, and for the many others who transmitted this realization to our sangha over the years.

0
SHARES
Share
Posted Under: 2016, Fall, Sangha News
About the Author: Keith Wiger
Keith Wiger was introduced to soto Zen in the mid-‘70s, when Katagiri Roshi showed up at a humanistic psychology conference in Minneapolis that Wiger had organized. In that he was the only one who showed up for Roshi’s early morning sit, Wiger received a personalized one-on-one session. Ever since he’s been puzzling over the power of the cushion. Wiger is also a licensed psychologist and maintains a private practice in Anchorage, Alaska.