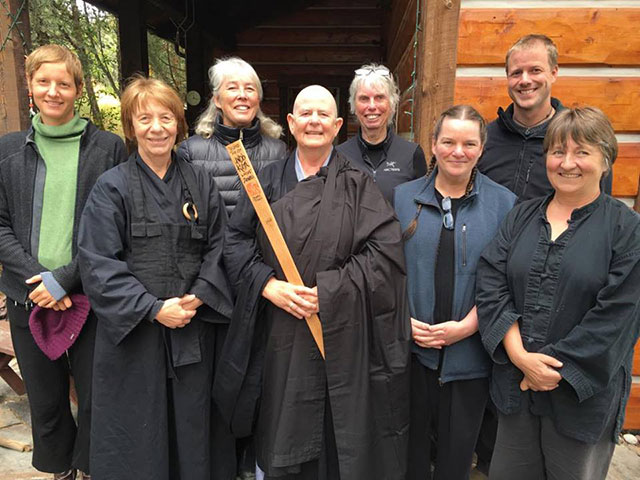 Leadership temporarily changed at the Sakura-ji Zen center in British Columbia this fall, as the founder deepened her practice in order to give more to students. 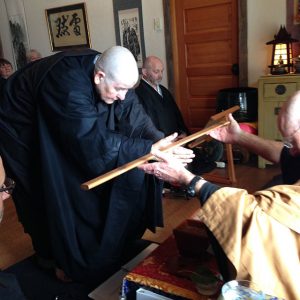 Kuya receiving a kyosaku, a stick traditionally used to tap meditators to help them stay alert, during the ordination ceremony.

This was a next step after Kuya was in September ordained as Undo (Cloud Path) Kuya in the Silent Thunder Order, at the Mission Mountain Zen Center in northwest Montana.

During the Sept. 25 ceremony Undo Kuya received the robe and bowls of a practicing priest, surrounded by her students and those of her teacher Zenku Jerry Smyers. It was a memorable occasion.

Kuya had earlier decided to pursue ordination as priest in training, and her many students and friends have been supporting her along the way.  For instance many people helped her stitch her okesa robe, a garment traditionally reserved for people taking ordination in Japanese tradition.

Stitch by tiny stitch, the sangha helped create the patchwork robe that is the garment of humble Zen monks.  They then brought the robe to Mission Mountain for the ceremony.

We look forward to Kuya’s return to Creston.  Her training and insights gained from the intense practice period will benefit all, as she continues to offer inspiration to students both local and on-line. 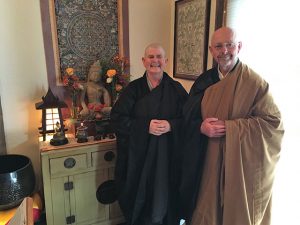 Zenku Jerry Smyers and Kuya after the ordination.

This deepening started in 2014, when in order to further her own training Kuya became a disciple of the Silent Thunder Order.  Since then several sangha members from Sakura-ji have travelled to the Mission Mountain Zen Center, for spring and fall week-long retreats led by Zenku Jerry Smyers.

Kuya has been a dedicated Zen practitioner and teacher for several decades. She offers a regular weekly meditation schedule, week-long and weekend retreats, dharma talks, and class instruction.  Many students have been inspired by Kuya’s genuine and caring approach to teaching.

With support from Lorraine Smith, Sakura-ji kept its doors open to practitioners while Kuya was away. The center offered regular sitting schedules and even a weekend retreat.

Smith’s dharma name is Habukai (Gentle Sword), and she has been under Kuya’s compassionate guidance since our zendo opened, including a commitment to the Soto Zen precepts in 2010. In September Kuya installed Habukai as acting lay practice leader, in a small ceremony attended by sangha members.

The sangha has been actively practicing since 2008, when Kuya Minogue and her partner Rita Scott opened their home-based zendo as Creston Zen Center.  They recently changed the center’s name to Sakura-ji (Cherry Blossom Temple), reflecting the region’s agricultural roots. 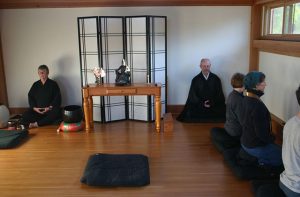 The interior of Sakuraji during a retreat led by Zenku (right) and Kuya (left).

Creston is a small farming community located in the Kootenay area of southern British Columbia, about a 10-minute drive from the Idaho border.  Every spring thousands of cherry trees in the valley burst into spectacular bloom.  Mountains, streams, abundant trees, and farmlands form a stunning setting for our remarkable zendo.

Yoga and qi-gong classes use our special venue, and we are creatively open to other activities.

We bow to the universe and our dharma friends, in gratitude for the wonderful path of a Zen practitioner.  May we all learn and grow together in compassionate understanding of the Buddha Way.

0
SHARES
Share
Posted Under: 2016, Dharma In Canada, Winter
About the Author: Lorraine Smith
Lorraine Smith is a Zen practioner in the Soto Zen tradition.  She joined Creston Zen Center when it opened in 2008.  As senior student of the re-named Sajuraji temple, she has been active in zendo activities under the guidance of her teacher Kuya.  Lorraine took the precepts in a ceremony in 2010 and received the dharma name Habukai.