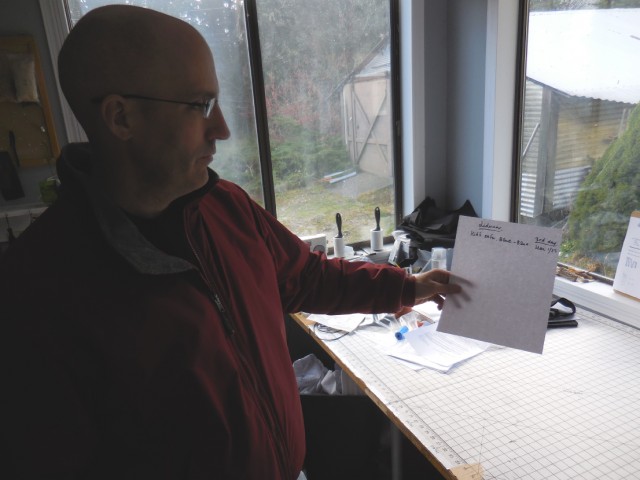 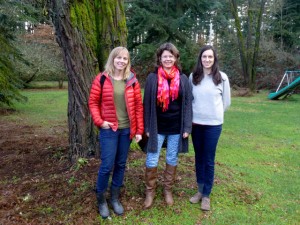 Instead the company, founded and operated by Zen teachers Koshin Christopher Cain and Soshin Lidunn Oberdahl Cain, is expanding its reach by contracting to use Google’s word-recognition system to identify potential customers.

Lidunn said in a recent interview that although the business has functioned well with the current web site, she and Koshin realized it had grown to the point that a deeper outreach system had become necessary.

But the changing state of on-line sales technology also spurred on their decision.

“We needed to make our site mobile-friendly,” Lidunn said, so that people could order from their mobile phones or other devices. 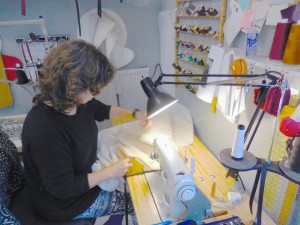 The new site will have 126 pages (which suggests the range and depth of items available from Still Sitting), each one newly-configured. The Cains have contracted with a web expert in California to make it happen, with a goal to be up and running before Christmas.

The business, which both describe as a serious commitment to right livelihood, has been quite successful as is. Started in 2003, Still Sitting has, even without Google’s extra help and simply using its own website, found buyers worldwide in places like Canada, England and South Africa, as well as throughout the United States.

In fact Still Sitting likely is the most complete manufacturer of meditation supplies in the Seattle area. 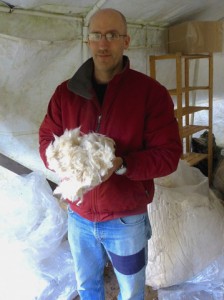 Christopher Cain shows what kapok looks like before it gets stuffed into a cushion.

The company also sells a line of locally-made sitting benches, including the folding “Seattle Bench,” made from walnut; the unique “Center Bench,” which allows for more movement; and a more traditional bench design, made from oak.

The journey to a Vashon Zen center

The couple are on Vashon because Lidunn and Koshin realized in 2002, after the birth of their first child Lars, “being a family and living at Mt. Baldy was not a good fit,”  Lidunn  said. For 13 years Koshin had been vice abbot of the Mount Baldy Zen Center north of Los Angeles.

They considered Norway, the land of Lidunn’s birth, and North Carolina, where Koshin was born. 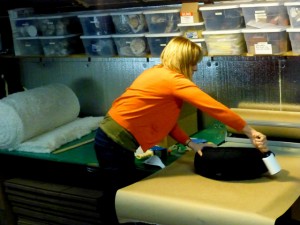 Lisa Daltstrand prepares a zafu for shipping by brushing it.

They chose Vashon after receiving a request from island resident John Candy, who sought support for an informal group of Zen practitioners. After the Cains moved to Vashon they eventually decided in 2003 to start the Puget Sound Zen Center, which has now existed for 13 years.

It was a gutsy gamble that paid off not least because Koshin and Lidunn apparently had, besides their Buddhist faith, an innate sense of entrepreneurship that led to their deciding, on the spot, to found Still Sitting. After all, Lidunn’s mother had been a seamstress in Norway and had passed on her skills to her daughter, and both Lidunn and Koshin had sewn their own cushions and robes previously.

They started by getting in touch with a woman in Seattle who, according to Lidunn, was selling her cushion business because she couldn’t make a living from it. Not perhaps a very auspicious beginning. But Lidunn spent the day before Christmas in 2002 watching the woman make her cushions, and that’s how it started. 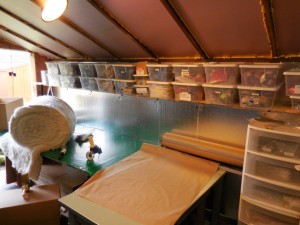 The elements of a meditation cushion, including kapok and cloth.

Another of the company’s featured products is robes for monks, which account for 10 percent of sales. Still Sitting is, according to Christopher, one of very few companies in the United States that sells such robes.

What’s even more unusual is that the robes are custom-fitted from dimensions supplied by customers, initially sewn by an outside seamstress, and then completed by Koshin, Lidunn, and two part-time employees Lisa Daltstrand and Erin.

Lisa and Erin are also computer-savvy and are helping with the online adjustment. They also pitch in by packaging orders for shipment.

Before the two employees arrived—Lisa in 2012 and Erin this past May– Koshin and Lidunn of course did all the work, but now the labor is split four ways.

Lidunn also has been doing architectural work, the profession she trained for in Norway, but when she’s not doing that, she works as the backup seamstress.

When Lidunn was asked, “How do you all find time to sleep?” she laughed. “We are very attentive when we are working,” she said, which sounds, perhaps, like something a Zen Buddhist might say.

Also in that vein is a comment Koshin made about the family’s sojourn on Vashon: “We’ve had the opportunity to work hard.” Perhaps it’s a way of describing “right livelihood.” 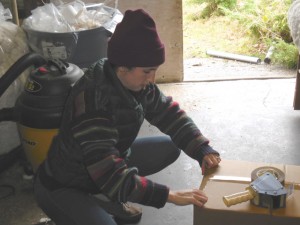 Erin packs a cushion for shipping.

Curious non-Buddhists might well be surprised at the level of determination the Cains have demonstrated. But making a living has not been particularly easy for many religious leaders in America.

And on Vashon, for example, there was a story in the local paper recently headlining the almost-simultaneous departure of five religious leaders from five separate denominations on the island. It’s no secret that with a year-round population of about 10,000 people on the island, it’s hard for the large number of denominations to attract enough members to remain fully active.

Even with fewer than 100 members, Puget Sound Zen Center is doing pretty well. No small testament to the leadership of the two Cains with all their hard work, and of course to a board that’s lively and hard-working and committed.

Not long ago the group figured out how to give Koshin something they wanted him to have and that he wanted: more time to teach and study.

With its growth and its new focus on harvesting customers from the internet, Still Sitting doesn’t look like it’s going away soon.

0
SHARES
Share
Posted Under: 2016, Sangha News, Spring
About the Author: Eric Horsting
About the author: Eric Horsting for eight years wrote and edited for the Vashon-Maury Island Beachcomber, after 32 years teaching literature and creative writing at Antioch College in Ohio. As a member of Puget Sound Zen Center he helps out with publicity. He joins Buddhist tradition after a Unitarian and Presbyterian youth.