(From the editor: This brief piece, about an attack on Buddhist monastic Kozen Sampson, ran on Portland’s KATU2 television on March 8. Sampson’s response was so generous, and reporter Stephan Mayer was so perceptive, that we though it should be shared. The piece offers such a unique window into regional attitudes about the Buddhist community, and about tolerance. Thank you to KATU2 for permission.)

TROUT LAKE, Wash. — Kozen Sampson, a Buddhist monk and co-founder of the Trout Lake Abbey retreat, said he was attacked Monday during a visit to Hood River. 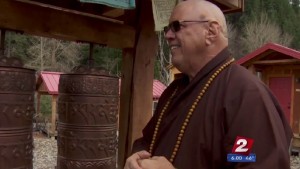 He doesn’t remember much, but says a man, who seemingly thought he was Muslim based on his clothing, attacked him for no reason.

“I pulled over, someone ran up and yelled. I turned around, they kicked the door, hit me in the side of the face and knocked my head into the frame of the car,” Sampson said. “I do remember [him yelling] an F bomb [about] Muslims, and that was it.”

But instead of anger and hatred towards that man, Sampson said he only feels forgiveness and compassion.

“I was thinking, ‘That poor man.’ Can you imagine living your life in fear and anger? Can you imagine wanting to do something that you had to hurt somebody?” Sampson said.

Now he’s hoping the attack will be a wake up call for others, to come together and support our fellow man no matter what God they may worship.

“I don’t know the Islamic faith well, but I do know that Muslims are our brothers and sisters and I would encourage everyone to just take a hard look at how supportive are you of all God’s children,” Sampson said.

His powerful message is already spreading — a candlelight vigil to promote peace and tolerance will be held Friday night in Hood River. Organizers ask supporters to meet at 202 State Street starting at 6 p.m.