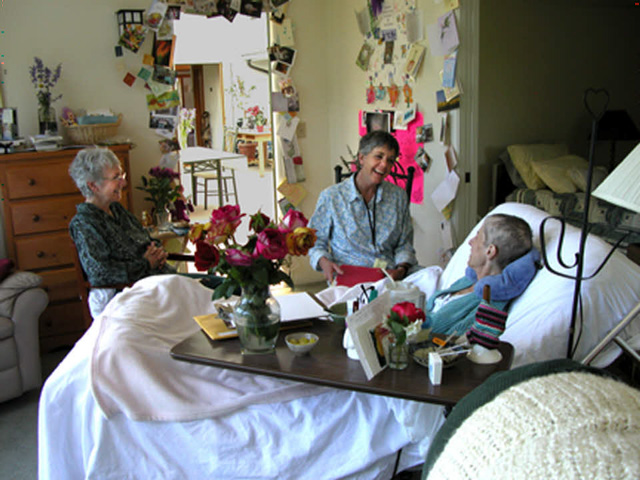 Volunteers supporting an Enso House guest, near the end of life.
Photos by: Charles Terry

Enso House, the Zen Buddhist-inspired hospice home on Whidbey Island north of Seattle, is at a crossroads.

With directors challenged to recruit a qualified live-in volunteer to help provide medical care, the program has struggled to accept new patients since last spring. The leadership is now developing a new strategy. 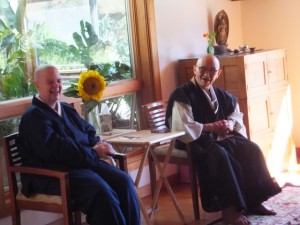 “We have been incredibly fortunate for all of our 14 years,” said Medical Director Ann Cutcher, a physician and Enso House volunteer. “The board has often half-joked that we have the world’s worst business model, but it’s worked really, really well.”

Under Cutcher’s direction, Enso House has served 79 patients and families, trained over 50 caregivers, and has built a solid reputation as an excellent resource for end-of-life-care in the Pacific Northwest.

Though Enso House has many capable volunteers, the need for a dependable, licensed clinician is crucial. And finding that person, who wishes to reside at Enso House for room and board and a small stipend, has so far been difficult.

After months of fruitless searching, the board of directors met in the fall of 2015 to discuss the future of Enso House, to look at the current model, and to identify some strategies for resolving staffing concerns. 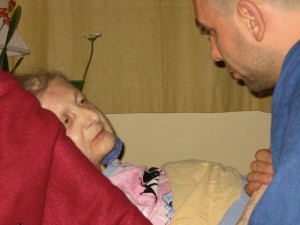 Deep listening is one of the greatest gifts to people facing death.

As a result of these conversations, the board is currently developing plans to remodel and upgrade living space for volunteer caregivers at Enso House.

Perhaps more important, the board is launching a new fundraising campaign, including internet-based crowdfunding, to cover costs for the needed clinicians.

In the meantime Cutcher has been interviewing licensed medical practitioners on Whidbey and in the Seattle area, to provide contract services to meet the needs of patients who have come to Enso House for the last stages of their lives.

But believing that an on-site, live-in caregiver is preferable, efforts also continue to recruit the right person for a residency at Enso House.

Staff and board members also are deeply engaged in exploring other ways Enso House might better serve Whidbey Island and the larger area. For instance, during this year Enso House will increasingly provide care and support for people in their homes, as well as at the facility itself. 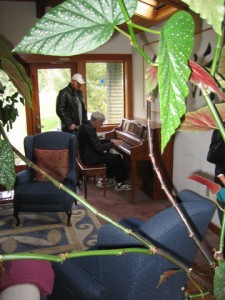 For 14 years Enso House has been supported almost entirely through donations, the generosity of community volunteers, and the backing it has received from the families whose loved ones have received care at the facility. Because of its small staff of caregivers, planners early on decided Enso House would only accept one guest at a time, and that the Enso House caregivers would decide, after the death of a guest, when they were ready to receive another person for care.

This freedom has meant Enso House has been able to provide end-of-life care for patients, and support for their loved ones, on a highly-individualized and intimate level. It is truly health care practiced on a human scale, caring for the caregivers as well as the guest.

Enso House has also become, over the years, a central gathering place for a community of local volunteers who support Cutcher and the other caregivers by running errands, cooking meals, working in the garden, reading to guests, or just sitting silently with them. Many volunteers seem to have found a home in Enso House, a place to connect with others on a deeper level, to share their skills and experience, and a place to just be.

A long history of caring

Cutcher first came to the Pacific Northwest in 2002, taking leave from her medical practice in Arizona for a year as a favor to her old friend Dai Chi Priscilla Storandt.

The two women, both potters, first met in Japan in the 1970s where they were studying traditional Japanese ceramics. Cutcher went on to become a physician, while Storandt became a Zen Buddhist practitioner and chief translator for Shodo Harada Roshi, a Rinzai Zen master based in Okayama, Japan. 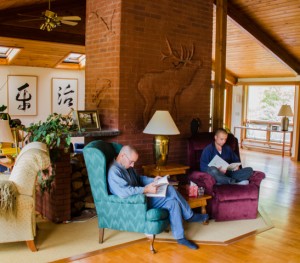 Monks Sokyu and Kozan reading in the living room.

In the late 1980s Harada Roshi and Storandt began making annual visits to Seattle, leading week-long retreats and training students in the path of Zen. In the 1990s Harada Roshi established the Tahoma Zen Monastery on South Whidbey Island, near the town of Freeland.

Storandt asked Cutcher to come to Whidbey to assist a group of Roshi’s students who were setting up a program to provide care for the dying. One of Roshi’s American students, David Trowbridge, had recently purchased a rambling ranch house on 20 acres of land, just a quarter mile from Tahoma Monastery.

Trowbridge’s intention was to create a non-profit organization and use the property for the local community’s benefit. He had several ideas but decided to ask his teacher how best to use the property.

Harada Roshi had a deep interest in hospice care. Several of Roshi’s American students were hospice workers at the time, and spoke with him frequently about their experiences caring for the dying. Harada Roshi had also recently met with a group of Japanese nurses in his home city of Okayama, Japan, and had heard from them about the struggles they faced working with the ill and dying in the Japanese health care system. 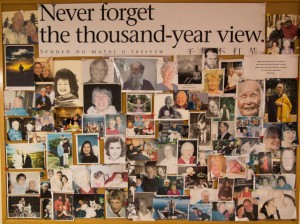 Roshi believed the Tahoma Zen community providing care to the dying would be of great service to the people in the area, and would profoundly impact his students’ own Zen practice.

The new property, named Enso House after the traditional Zen circle signifying the infinite, was an ideal setting for providing care. Located in a rural setting, the house is set back from the roadway and is spacious enough to accommodate caregivers, guests and their families.

Patient rooms, with large picture windows, look out on a large pasture and onto a small pond at the heavily wooded tree line. Deer and coyotes prowl the field at dusk, and bird feeders hanging in patients’ windows attract the island’s wild birds.

A board of directors for the new project was formed, non-profit status was attained, and the house was extensively remodeled by volunteer contractors to better accommodate guests and their families. Directors applied for Enso House credentialing through the State of Washington, and it became a licensed adult family home. 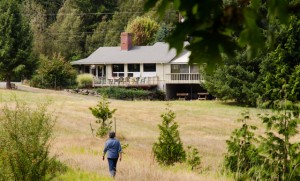 Enso House supports people in a spacious area of nature.

Cutcher’s original promise to her friend, to come for one year to help establish Enso House, turned into a14-year tenure as its medical director.

Another key reason Enso House worked so well for so many years was the kind support of Myo-O Renate Kramer, a German-born RN and Zen student.

Harada Roshi asked Kramer to join the Enso House staff in the early days, and she and Cutcher anchored care at Enso House for a decade as volunteers. Each received room and board and a stipend.

A third caregiver position was traditionally been filled from a rotating, international crew of Zen monks from Roshi’s home temple Sogenji, in Okayama.

But in 2014 Kramer returned to Germany to care for her own aging parents.

In her stead Meredith Bradley, a recently retired hospice RN from Michigan, joined the staff for a year as a volunteer. Bradley returned to Michigan last spring, and despite the board’s efforts Enso House has been unable to recruit a qualified replacement.

Harada Roshi has always counseled his students to take the “10,000-year view,” to think about those to come who may someday need our care and compassion.

Enso House’s leaders have taken this counsel to heart. Despite a time of great change, the Enso House community is determined to carry the work forward and to ensure that Enso House will be around for a very long time.

If you are interested in learning more about visiting, volunteering with, or supporting Enso House, please contact us.

1
SHARES
Share
Posted Under: 2016, Compassionate Action, Spring
About the Author: Ed Lorah
About the author: Ed Lorah is a long-time student of Shodo Harada Roshi and a social worker engaged in end-of-life care in the Seattle area. He is the current board president for Enso House.