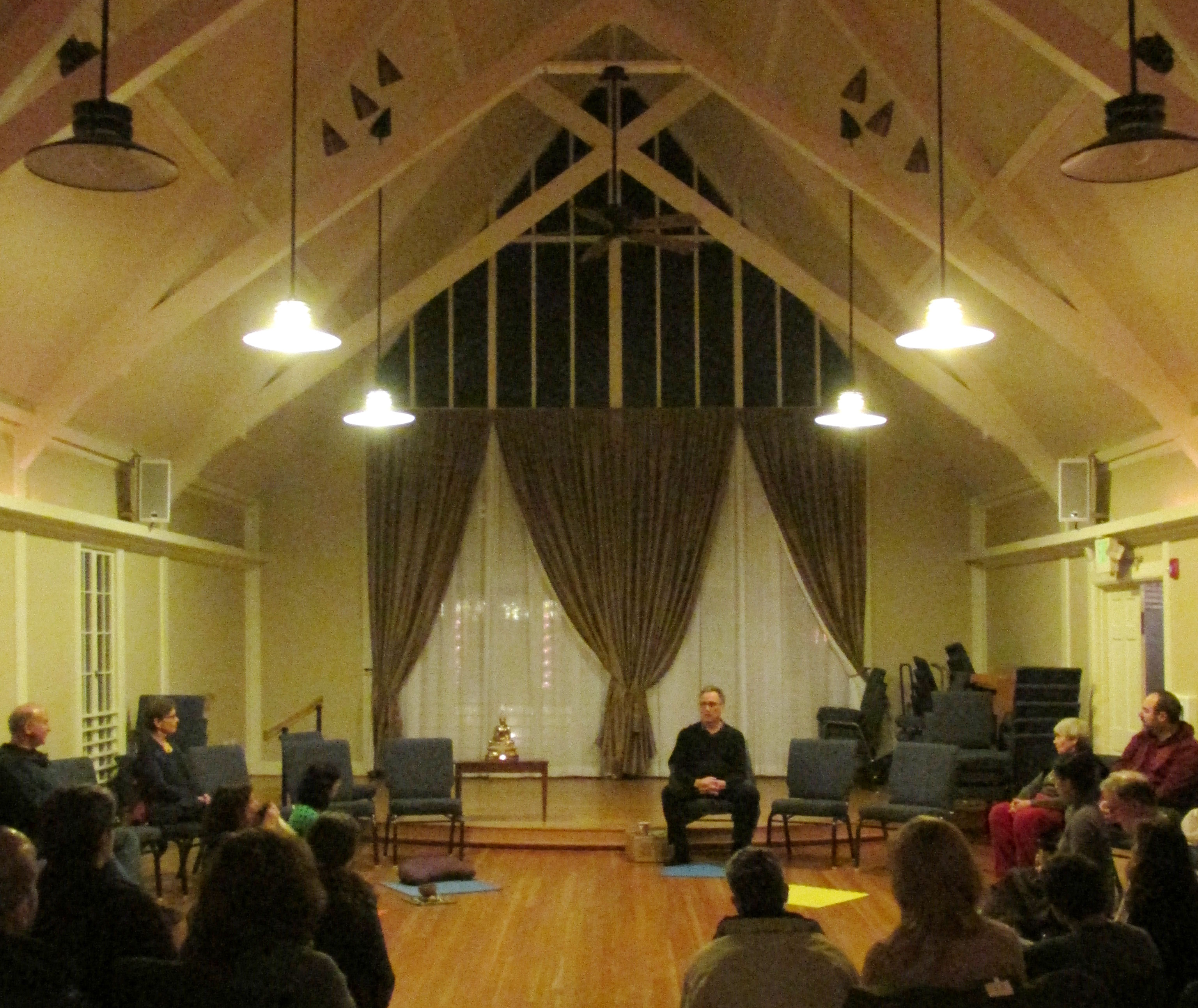 The Northlake Unitarian Church chapel, with chairs and mats drawn into a circle, makes a comfortable place to practice.
Photos by: Frank Crum, Steve Wilhelm

Eastside Insight Meditation has moved its meetings to the Northlake Unitarian Universalist Church in Kirkland, east of Seattle.

After 15 years meeting in the home of Steve and Ellen Wilhelm, the group held its first sit in the new location on November 12, 2015. 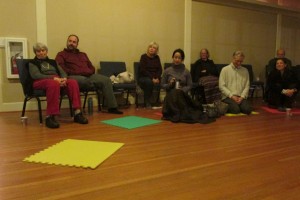 People can sit on chairs, or on the soft mats, depending on their preference.

“It seemed time to shift the sitting group to become more of a community endeavor,” said the Wilhelms in an email. “When it’s in our home, it’s harder to share the responsibilities and rewards.”

The Wilhelms opened their home twice a month for the last 15 years.  Never knowing for certain who would come and what would transpire, their welcoming and trusting spirit has often been rewarded by long-lasting friendships and rich sharing during the meetings.

Eastside Insight Meditation is one of four neighborhood meditation groups that operate under the umbrella of Seattle Insight Meditation Society. The Eastside group primarily serves the cities of Kirkland, Bellevue, Redmond and Bothell, supporting people who live on the east side of Lake Washington. There are few Buddhist groups on the Eastside, compared to the many in Seattle. 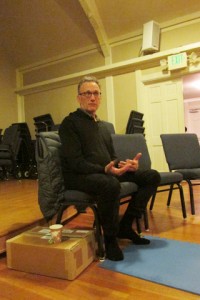 Laura Wright, who has regularly attended the Eastside group since the fall of 2012, said the move to Northlake has been smooth for her.

“I appreciate how the Wilhelms not only opened their home for the sittings, but how they also made the dharma very accessible to beginners like me, always encouraging and supportive,” Wright said. “At first I was wary about it being at a church, since my path to meditation and Buddhism has been secular, and I was unsure how the new setting would affect the sittings and the teachings. However, that hasn’t been an issue at all.”

Marian Stewart, the minister at Northlake, has long wanted a regular meditation group within the church, so the move supports her aspiration and opens participation to a wider community.  Stewart occasionally attends the meditations.

The chapel where the group meets is a lovely space with Zen-like simplicity and a sense of the sacred.

“We’re trying to keep much of the intimate atmosphere that was supportive in our home,” the Wilhelms wrote. “In particular, we’re arranging seating so there’s a circle of chairs around an inner circle of cushions on the floor, so we’re all facing each other and can easily communicate.” 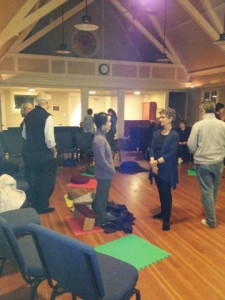 Ellen Wilhelm visits with May Chang, during a break.

More space is another benefit of the move, because the Wilhelms’ living room could get rather crowded when a guest teacher was present.  The larger chapel space will more easily accommodate such meetings without sacrificing a sense of intimacy and community.

“The location has been very welcoming,” Wright said. “We have figured out a way of sitting that allows people to sit in cushions on the floor, and also allows people to sit on chairs – which seems to be less intimidating for the newer members. And the teachings have continued as they had been before – an exploration of the dharma, and the ability for the attendees to share their perspective and ask questions.”

“One of the things I appreciate about the new location is that we have an opportunity to volunteer in things like setting up and cleaning up afterwards,” she said, “Which for me makes me feel more like a member of the community.” 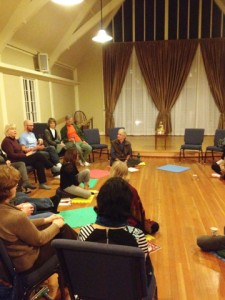 Steve Wilhelm guides the check in, after the group meditates together.

Linda Bailey, another regular attendee, commented on the improved accessibility of the new location for people with disabilities, compared to the Wilhelms’ home. The chapel is ADA certified, and parking is ample and directly behind.

“When people with a disability go to an event and it is accessible, they feel welcome,” Bailey said. “Meeting at the new location tells me that the dharma is for everyone.”

Eastside Insight Meditation will continue its meeting schedule of the second and fourth Thursdays of each month at 7 p.m.   The teaching and practice of the group is in the insight meditation tradition of Theravada Buddhism.

The format of each meeting is a 40 minute sit (including guided meditation when people new to insight practice are present), a break for tea, a “check-in” time, and then a dhamma talk followed by an open discussion period.

The check-in time is a deliberate attempt to build a sense of community.  Depending on the number of people attending and whether a guest teacher is present, it offers each person an opportunity to share something about their integration of dhamma practice into daily life. 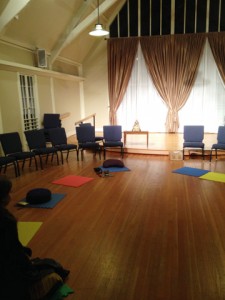 Northlake has been very kind, to make the space available.

A dana collection (donations made in a spirit of gratitude for the teachings received) concludes the evening.  The Wilhelms for years donated the dana to Buddhist nunneries in Southeast Asia.

Topics of recent dharma talks have been the three jewels (Buddha, dhamma and sangha); significant stories from the life of the Buddha; the Brahma Viharas (loving-kindness, compassion, sympathetic joy and equanimity), and what is mindfulness and how it works.

The Wilhelms arrange for guest teachers throughout the year, and the group has been blessed by regular visits from Ajahn Ritthi and Venerable Santidhammo from Atamma Monastery in the nearby town of Woodinville; Venerable Dhammadinna from Bodhi Heart Sangha in Seattle; well-known Vipassana (Insight) teacher Steve Armstrong; and Seattle Insight Meditation Society founding teacher Rodney Smith.  Local dharma leaders and teachers-in-training Tim Geil, Keri Pederson and Lyndal Johnson have also visited and shared the dhamma.

Steve and Ellen Wilhelm can be contacted at stevellen95@comcast.net.

0
SHARES
Share
Posted Under: 2016, Sangha News, Spring
About the Author: Frank Crum
Frank Crum practices in the Theravada tradition and has been attending Eastside Insight Meditation for five years. He is grateful for an opportunity to practice in community on the Eastside rather than having to drive into Seattle.