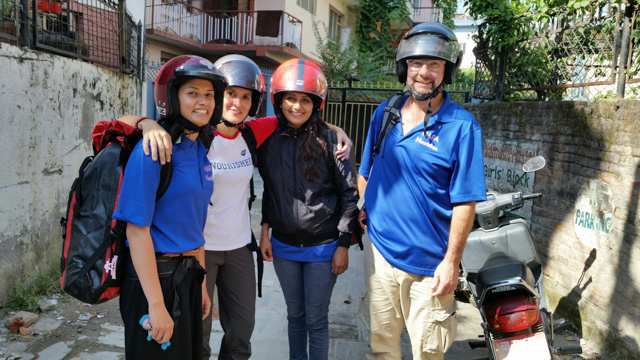 The last year of my life has been an amazing adventure filled with travel, meditation, earthquakes, and helping launch the NAFA Nourishes Program in Nepal. 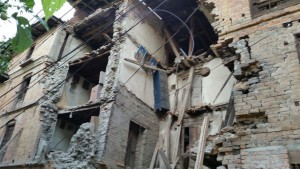 Older unreinforced masonry buildings suffered the most significant damage. In the Katmandu area, most of the deaths and injuries occurred in buildings like this.

At this time the NAFA Nourishes Program serves the supplemental nutritional needs of about 356 children in 13 children’s homes (orphanages) in the Katmandu valley of Nepal. NAFA stands for Nepal Adoptive Families Association.

NAFA Nourishes field nurses travel nearly every day to orphanages to deliver nutrition-related health care to children, work we will be expanding this year.  In 2016 NAFA Nourishes will be doing more nutrition and hygiene training for the children and staff at our partner Children’s Homes.

According to a recent article in the Himalayan Times, 41 percent of all children in Nepal suffer from malnutrition and stunted growth.  Additionally, 46 percent of all Nepali children below five suffer from anemia. Good nutrition for young children in the developing world is one of the most effective foreign aid investments available.  Good nutrition provides significant life-long health benefits to the child and the next generation.

The U.S-based organization started NAFA Nourishes Program just in 2015. It designed a program and agreed on a budget in partnership with the Katmandu-based Partnership for Sustainable Development Nepal. 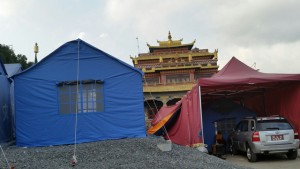 The tents, in front of a monastery, are emergency housing still in use 5 months after the earthquake. This is the Boudha neighborhood of Kathmandu, where many Tibetan Buddhist live.

Late last summer I worked for two months in Nepal preparing to launch the program, and in September we hired two Nepali Nurses to do field visits to orphanages to deliver nutritional health care, nutritional training, and distribute vitamin supplements where needed.

NAFA Nourishes has also partnered with a local charity hospital in Katmandu to get help addressing more complex health issues that exceed the scope of our program.  Our philosophy is to train and support Nepalis in running a sustainable program.

Eight years ago, when I first started exploring Buddhist meditation at 43, I never imagined this journey would take me to Nepal, and to this work.

I first went to Friday night meditation at Sakya Monastery in Seattle. After going to Sakya for a few months, I decided to take the beginning meditation class offered by Seattle Insight Meditation Society (SIMS).

Over the next few years I became more involved with SIMS.  As my meditation practice progressed, and frequently regressed, I decided to go on retreat to deepen my practice.  After a few retreats at Cloud Mountain, I began to dream about going on a meditation retreat in Asia. 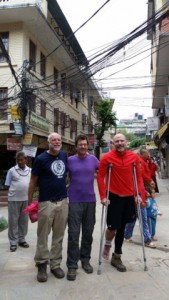 Me, my friend Jim and his brother Vance, reunited in Kathmandu on May 1. The earthquake fractured Jim’s leg. The Nepali army flew us to Kathmandu on helicopters.

I probably wouldn’t have made the choice I did had I not met a Sakya Monastery monk from Seattle named Lekshay.  As I got to know Lekshay better, he told me about his annual trips to Tharlam Monastery in Katmandu over a decade.

Lekshay also told me about a nutrition need at the monastery, significant malnutrition in many of the little monks, that I hadn’t imagined. He told me how he started bringing vitamins over for the little monks and worked with the monastery to provide better nutrition.  This was my first lesson on the nutrition problems that exist in Nepal.

In early 2014 I started a new job and shortly thereafter my partner Lindsay Custer  was offered a Fulbright teaching post in Tokyo Japan that started in fall of 2014.  Lindsay had tenure at a local community college and was able to take a sabbatical.  Lindsay asked me to join her for the year in Japan.

Following her invitation I decided to take an “unauthorized sabbatical” from my new job to travel in Asia.  I also decided to include a three-month visit to Nepal, to pursue my dream of going on a meditation retreat in Asia.

My plans in Nepal included a six-week meditation retreat, touring Katmandu, trekking with friends, a yoga retreat, and a visit to an ayurvedic clinic. The capstone of my trip was to be a class at Kopan Monastery, north of Kathmandu, on death and dying.

On the edge of death

A few minutes before noon, Nepal was struck by a devastating magnitude 7.8 earthquake with an epicenter near the Langtang valley.  The earthquake triggered a massive landslide down Langtang mountain.  From our position between Ghoratabella and Langtang village, we heard the ominous thundering sound and saw the dark cloud of the landslide coming down the mountainside into the valley. 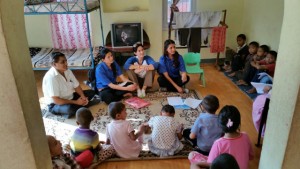 Our team explaining the NAFA Nourishes program to an orphanage. After this presentation, this orphanage decided to participate in the program.

It appeared the landslide was coming down the valley floor and going to end our lives within moments.  A rapidly moving cloud of snow and dirt caused by the landslide covered us, but the brunt of the landslide stopped a few kilometers in front of us.  The landslide destroyed Langtang village and in moments killed approximately 200 inhabitants, locals and trekkers.

We had narrowly escaped death.  My class on death and dying happened in the Langtang valley – not at Kopan monastery.  Looking at death this closely, and surviving, is a transformative experience.

Approximately 250 people from up and down the Langtang valley went to Ghoratabella after the earthquake waiting for evacuation.  Many people had injuries and there were a few corpses that had been brought down the valley.   Both locals and trekkers had lost friends and family in the disaster.

Serious aftershocks continued in the valley for days and brought more landslides.  Every aftershock was a reminder of our tenuous hold on life.  People were cold, hungry, and afraid. 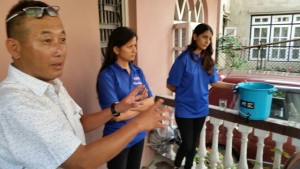 To add to the suffering at Ghoratabella, the evacuation was very chaotic.   Outside Nepal, our families and friends did not know if we were alive or not. Scenes similar to this were happening all over Nepal after the earthquake.

I wasn’t evacuated from Ghoratabella for three days.  It took the Nepal Army many more days to complete the evacuation of the Langtang valley.

I stayed in Nepal until early June and volunteered with an orphanage trade association to help provide relief for many orphanages in the Katmandu valley.  During this time, I met many incredible people who were inspiring. There was an amazing group of young talented Nepalis who volunteered at the trade association for over a month. 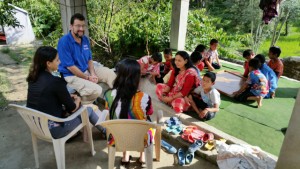 Me plus our PFN team meeting with a children’s Home in September. The orphanage, run by a Nepali woman nicknamed Mommy, was one of the first orphanages we enrolled in the program.

One of those was Amy Hecht, the president of Nepal Adoptive Families Association (NAFA), which was giving money to help with the relief effort.  NAFA is a loving group of families from around the world who have adopted children from Nepal.

I also had a few phone conversations with a previously unknown distant relative of mine named Cosima Lux, who was considering coming over to Nepal to help with the relief effort.  She works in healthcare, and has set up nutrition programs for orphanages in Haiti and Turkey.

One day Amy and I were having a conversation about how things at the orphanage trade association were going.  I told her the story of my friend Lekshay who had been bringing vitamins over to Nepal for many years.  Amy was very interested in this and then shared with me that many of the adopted children from Nepal have serious nutrition problems.

If you would like to learn more about the NAFA Nourishes Program or donate, please click here.