The cover of the new book features a Northwest scene.
Photos by: Mark Winwood

The last time I saw Ngawang Singhi I was about to board the overnight bus for the long, hard trip down the mountains from McLeod Ganj to Majnukatilla, Delhi’s Tibetan settlement, the first step toward my return to the United States after two months in India.

Singhi, a Tibetan refugee living in the one-time British Himalayan hill station overlooking Dharamsala, came with his brother and two friends to see me off.  Placing a white ceremonial offering scarf called a khata around my neck, he wished for me a virtuous journey, along with a quick and safe return to see him, wherever he would be. 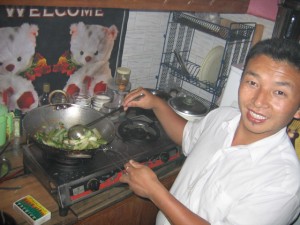 I mention Singhi as he has been instrumental – the fuse-lighter, actually — for my journey as a student and sharer of Tibetan Buddhist philosophies and practices over the past 11 years.

Singhi’s story as a young monk imprisoned in a Chinese prison for pro-Dalai Lama sentiments, his harrowing trip across the Himalayas to refuge in India and the days following, form the basis of “The Brothers.” This piece is the first of 30 writings that make up my new book, “Am Stopping My Finger Now: Tibetan Buddhist Musings for Western Life.”

I appreciate the opportunity to announce its publication here in Northwest Dharma News.

“Am Stopping My Finger Now” presents an assortment of selections in which aspects of everyday Western living are viewed through a myriad of Tibetan Buddhist perspectives and sensibilities, in many instances depicted through the lens of the environment of the Pacific Northwest.

I created the book for beginners, experienced practitioners and those simply curious, sharing ideas on the simplicity and complexities of many dharma understandings. These include impermanence, the nature of mind, karma, meditation, enlightenment, Buddha-nature, dying and rebirth, the Tibetan situation, interdependence, happiness, Buddhist monasteries and lamas.

Many of the writings are culled from my several study-oriented travels to India and Nepal, years of teaching dharma to university students and practitioners in Florida, and various life experiences over the past 60 or so years.

I had several motivations for writing about these subjects, starting with a promise I made to Singhi that I would communicate the strength and beauty of his culture and beliefs to the folks back home. In addition, these teachings are simply too precious and empowering to keep to myself.

Specifically, it is my intent in publishing these writings to provide, for seasoned meditators and curious newcomers alike, clear and simple encounters with non-dogmatic, bread-and-butter Buddhist notions such as reality, love, death and what it means to be fully human.

Here are a few quotes from the book:

“Nothing has an inherent essence. Everything is in flux, perpetually coming together, abiding for a bit and then decaying into falling apart. There is no destiny, no fate, no consistency – just the interplay of occurrences of which I understand I am a part and have a responsibility to participate in as wisely and wholesomely as I can.” 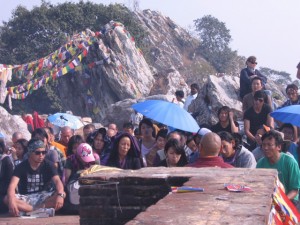 “The perfectly flawless, infinitely-faceted diamond mind is carried by all sentient beings deep in our being. Many are aware of its presence, perhaps you are one of them. It is there waiting, as it has been for countless lifetimes. We simply embark on the Dharma path, trek, awaken and transform. The journey toward it is the prize . . . along the way everything changes in the very best of ways.”

“At the moment of your death you will have spent a lifetime creating karmic inclinations, and you’re going to pass them onto someone else; a being who will then take what you’ve created, experience and revise it, and then pass that onto someone else upon their death. This is the continuity of rebirth of which Buddhism reminds us.”

“Am Stopping My Finger Now” is currently in its informal first printing, being distributed to friends and family.  A broader public release is being readied.

Because I have been undecided about how to best approach the community at large with this title, self-publishing this book really served a few practical purposes.

First, it was a commitment to myself, proving to myself I could actually accomplish this. In addition, I hoped that publishing my thoughts and perspectives might give me visible “teacher” credibility in my new Seattle-area community. And lastly, I hoped the volume might serve as a “calling card” to book publishers of similar content, who might be interested in future work. 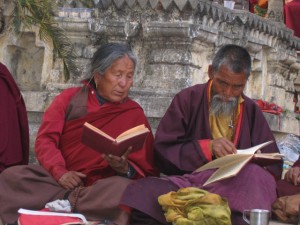 As a one-time newspaper writer, editor and publisher, I also entertained the idea of the book being an initial publication of a future Chenrezig Press, which would serve as an outgrowth of the Chenrezig Project.

I founded Chenrezig Project in Florida in 2005 as the vehicle through which I teach the dharma. Through the project I already write and publish a weekly e-letter, currently going to more than 600 subscribers worldwide.

Headquarters for the Chenrezig Project is now my home in Monroe, a small city northeast of Seattle. Currently I offer teachings in Monroe on Thursdays, at SoulFood Coffee House in Redmond on Sunday mornings, and online nationally on Wednesday evenings.

We’re also planning some workshops, as well as a local free-for-the-public weekend dharma film festival. This is something we brought to the Florida community for six consecutive years.

For more information about “Am Stopping My Finger Now,” the Chenrezig Project or our publishing efforts, please contact Mark Winwood at mwinwood@chenrezigproject.org, or (206) 707-9944.

I’d be happy to share experiences and insights that might be beneficial, as well as learn about yours. We’d also be happy to offer a book reading and signing anywhere in the greater Seattle region.

0
SHARES
Share
Posted Under: 2016, Dharma Healing, Arts, Spring
About the Author: Mark Winwood
About the author: Mark Winwood is a former dot.com executive who teaches in the Tibetan Buddhist tradition, primarily in Florida and in his newly adopted home in Monroe, a town northeast of Seattle.