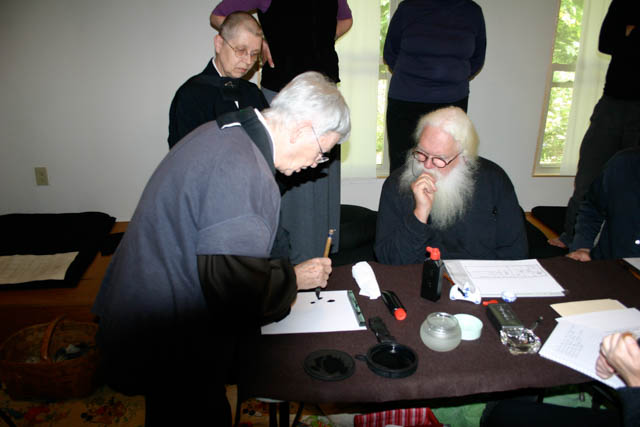 “The Eightfold Path” was recently published by Temple Ground Press, an imprint of Olympia Zen Center that emphasizes women’s writings. The book was edited by Jikyo Cheryl Wolfer.

Temple Ground Press was founded by Zen teacher Eido Frances Carney in 2012, to publish women’s voices in the dharma so future Zen students will be able to trace the history and articulation of women teachers of this century. 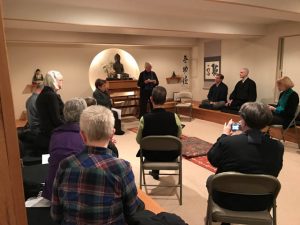 The next book, “Zen Teachings in Challenging Times,” is due out in July and will include the voices of 25 women teachers from across the Americas. It includes an introduction by Dai-En Bennage.

In 2019, Temple Ground will publish the teachings of Enji Boissevain, a transmitted female teacher in the lineage of Kobun Chino Otogawa Roshi.

Since many researchers of women’s Buddhist practice are disappointed by limited evidence of their own lost sisters, there is an obligation to care for the future by offering women’s voices now.

This is so any lack does not create an absence on which future claims of exclusion of women from the dharma may be based. To put it another way, women have a duty to come forward and be present in Buddhist literature today, to quell claims of gender discrimination in the future.

The just-published “The Eightfold Path” describes the “how to” of the Buddha’s way, a structure that encompasses Buddhist teaching and shows us how to live those teachings.

The core of the Eightfold Path is wisdom, concentration and ethics. These three essential practices comprise the most important teachings for 21st-century Buddhism. 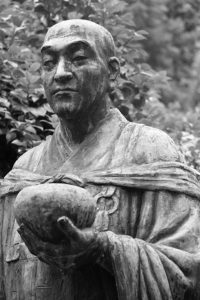 There are two versions of this statue of Ryokan at Olympia Zen Center.

The purpose of a spiritual life is to align our action with our understanding. If we understand the entirety of the eightfold path we can correct many of the problems of imbalance in our communities, and in our personal lives.

If we have the steadfastness to remember the three core practices of wisdom, concentration and ethics, we can stop the swirling world of suffering. Instead we can find freedom, the universal perspective within the particulars of our ordinary lives, and be free. We can move from a mind of complaint to a mind of gratitude.

“The Eightfold Path” teaches us how to create a spiritual life and how to fully live it.

These books are among several other precedent-setting books published by Temple Ground Press.

“Kakurenbo Or the Whereabouts of Zen Priest Ryokan,” by Eido Frances Carney, is an exploration of the life of the Zen priest-poet Ryokan, who lived in the 18th century, interwoven with memoirs of the author.

In the book Carney observes Ryokan’s life from the perspective of her own training as a Zen priest in Japan, and encounters Ryokan in contemporary life as a model for learning and renewal.

Ryokan loved the game hide-and-go-seek, called Kakurenbo in Japanese, and this provides a metaphor as Carney seeks to uncover the mysterious pathway of a hermit priest who seems to defy description. 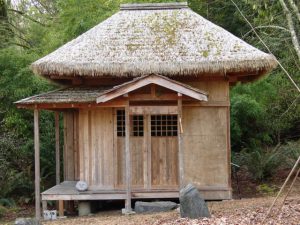 An Olympia Zen Center replica of Gogo-an, Ryokan’s hut where he lived for many years.

Ryokan had no plan to promote himself in any way or to encourage popularized stories about his life. He simply continued to live, not as a unique figure, but as someone authentic to his vow, living the dharma somewhat hidden away as a hermit priest as he climbed up and down the slope of his mountain refuge bearing the cold in winter and enduring the mosquitos in summer.

Ryokan called his hut Gogo-an, and  a replica of this hut has been built on the grounds of Olympia Zen Center, where anyone may apply to experience a solitary retreat in its primitive and sacred atmosphere.

Nearly 200 years after his death Ryokan is known globally. Our wish to know him might suggest our hunger, in these difficult times, to touch a rare sainted life that is unabashedly simple. Perhaps we long to live fully in the courageous way Ryokan did, to help us withstand with some grace the frictions and challenges that beset us.

Translations of Ryokan’s poems from the Japanese, by the acclaimed Nobuyuki Yuasa, highlight each chapter and appear throughout the book. These poems express Ryokan’s teachings in the dharma, and his wisdom as a guide in the 21st century. 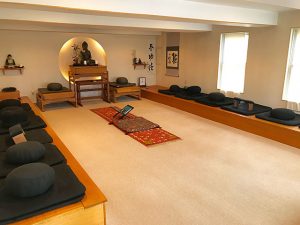 Many people have practiced zazen in Olympia Zen Center’s zendo.

The memoir gives a personal glimpse into Zen training today, where the author was the only woman and the first foreigner in the history of the 700-year-old temple. This creative medley—biography of Ryokan, author’s memoir, poetry of Ryokan, and teachings in the dharma—opens us to a new interpretation of Ryokan as a profound teacher, scholar, poet, hermit and priest.

Dogen’s great spiritual teachings are the foundation of Soto Zen. In the book, for the first time contemporary American women Zen masters, in the Soto tradition, join together to reach within Dogen’s mind to make his masterpieces accessible and practical for those seeking deeper realization and understanding. The collection contributes to our Soto Zen literature by bringing forward seasoned voices of priest-teachers in their kinship with Dogen, interpreting him as a clear dynamic and force of spirit for the 21st century. 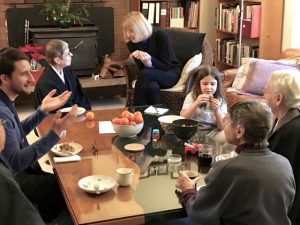 Members gather in the living room for a holiday breakfast.

The essays are an homage to Dogen, an implicit expression of gratitude to our many translators, and a tribute to women and men standing together teaching side by side, supporting one another fully and equally in the Buddhadharma.

Yet another book, “Seeds of Virtue, Seeds of Change,” includes the voices of 27 female Soto Zen masters who came to the tradition because they believed their spiritual practice could make a difference in themselves, and a difference for the world. The book is edited by Jikyo Cheryl Wolfer.

The women speak directly from the platform of their own awakening experiences, because the world most needs the ethical values found in these teachings on body, speech and mind. It offers the authentic presence of teachers firmly planted in the dharma, expressing the myriad flavors of Zen practice from the informal personal taste of a small Zen community to the formal banquet of large urban centers.

This book of Zen teachings is one response to the current global crises, which demand a spiritual response equal to or greater than the problems we humans have collectively created. Like seeds planted and creating change, the teachings speak to those already meditating or those ready to begin meditation, who connect with individuals worldwide who recognize the need to meditate together. 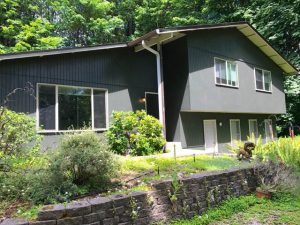 The author’s words open us to the nature of compassion for ourselves and others. The lives of these women Zen masters inspire us to walk beside them in the dharma, and to root ourselves in the deep groundwork of a spiritual practice, and the living virtue of a spiritual home.

Olympia Zen Center was founded in 1995 by Eido Frances Carney to support a developing sangha, after she returned from five years of living and training in Japan.

In 1999 the center moved to its present location, a 5-acre site along the Chehalis Western Trail, a 20-mile walking and bicycling path.  The center hosts visiting teachers for interfaith discussions, and offers study of Buddhist texts in community dialogue on Saturday mornings.

It also continues to offer active practice in the South Bay area of Olympia with daily meditation on Wednesday evenings, Saturday morning study programs, and several weeklong sesshins during the year.

Temple Ground Press books are designed by Fletcher Ward of StraightLightStudio.com. All books are available online, or can be ordered at local independent bookstores.

0
SHARES
Share
Posted Under: 2018, Dharma Education, Summer
About the Author: Eido Frances Carney Roshi
Eido Frances Carney Roshi is the teacher and abbess at Olympia Zen Center. Transmitted by Niho Tetsumei Roshi at Entsuji in Japan in 1997, she promotes the teachings of Zen priest-poet Ryokan and encourages the practice of art and creativity in daily life. She is a writer, painter and poet, and is about to obtain an electronic keyboard to study jazz piano.