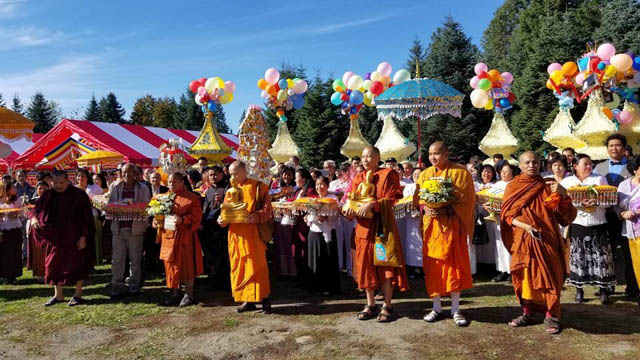 The members of Bright Buddhist Association, now in a converted house, are preparing to break ground for a much-larger temple complex.

Nearly 400 sangha members are raising money to support the temple expansion project, on a 6-acre site north of the town of Lake Stevens, which is in turn north of Seattle. 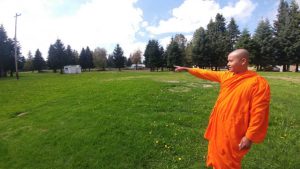 Ven. Aggashri points to where the temple will be built.

The region is largely rural with a sparse population of Asian people. The temple, the only Buddhist sangha in the area, attracts a multi-national group of Asian members including Cambodian, Laotian and Thai people, said Ven. Aggashri, one of the temple’s two monks.

Reflecting the unique mixture of cultures, Ven. Aggashri, 28, was born in Bangladesh and studied the dhamma in Myanmar. He is a student of temple master Ven. Phomma Phommaly, 44, who is Cambodian. Ven. Aggashri’s English is very good.

The formal name of the temple is Watchansi Bodhiyana Ratanaram, which translates in English to Temple of Gems of Wisdom, Ven. Aggashri said.

The building may have once been a local farmer’s home, but now the interior seems rich with Buddhist and Asian culture. 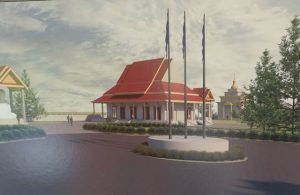 An artist rendition of part of the planned monastic complex.

A golden Buddha is on the center of the ornate altar, surrounded by other Buddha statues. Framed paintings of moments in the life of the Buddha are mounted around the perimeter of the room near the ceiling, as well as framed diplomas attesting to the monastics’ training.

The floor is covered with rich purple and white carpets, while the ceiling is ornate with colorful fabric hangings.

Outside the building has been decorated with dragons and green-and-white lotus leaves. An eight-spoked dharma wheel, painted in maroon and red, is central in front of the building. 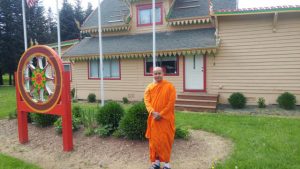 Ven. Aggashri  in front of the current building, which features a dharma wheel.

While the area behind the house is largely an open field and a grove of trees, Ven. Aggashri hopes to start building sometime in 2018.

“Our master has been talking to engineers and architects,” he said.

The expanded facility will include a large dhamma hall and a smaller meditation hall, so it can support cultural ceremonies as well as meditation practice, he said. The structure will be built of wood, in a combination of traditional Southeast Asian elements and Northwest elements. 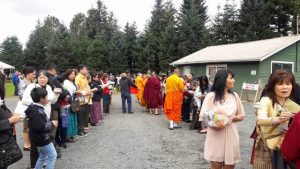 People line up for an alms-giving ceremony, a traditional part of Southeast Asian Buddhist culture.

The monastery attracts many Asian people, and some Westerners, for big events like the combined Thai, Lao and Cambodian New Year’s festival on April 14.

“If we have a ceremony, like Vesak or robe offerings, a lot of people come, he said.  (In Southeast Asian culture Vesak commemorates when the Buddha was born, enlightened and also when he died.)

While the temple seems foreign to many local people, relations have been good with local Christian churches, Ven. Aggashri said. 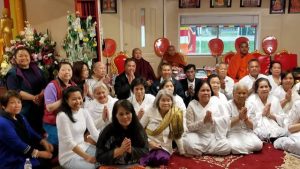 Long-time supporters of the monastery, looking forward to a more permanent structure.

“We appreciate Jesus Christ’s teachings, because he teaches about loving kindness and compassion as well,” he said.

While the temple is far from his homeland, and truck traffic is loud outside, Ven. Aggashri said he’s happy.