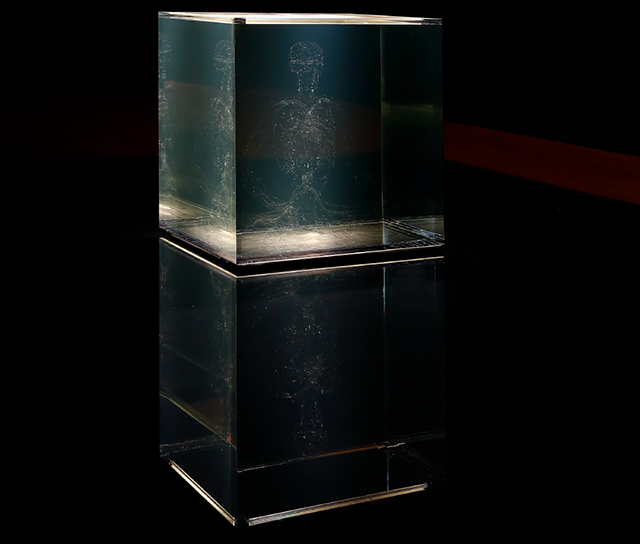 This sculpture of the Panchen Lama’s cardiovascular system, rendered in Pyrex, is visible and invisible depending on the angle.
Photos Credits: Frye Art Museum, Skip Howard, Olli Tumelius, Mark Woods

An evocative sculpture of Tibet’s Panchen Lama, rendered in Pyrex glass and mineral oil, was on view at Seattle’s Frye Art Museum from January through April.

The sculptural work was titled “Seated Panchen Lama.” In Tibetan Buddhism the Panchen Lama is second in spiritual authority only after the Dalai Lama. 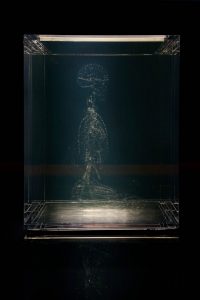 The sculpture metaphorically refers to disappearance of the boy originally designated as the Panchen Lama.

In 1995 the 14th Dalai Lama recognized Gedhun Choekyi Nyima, then six years old, as the 11th Panchen Lama. Chinese authorities quickly took the boy and his family into custody, and none of them have been seen since. The authorities then declared a different child, Gyaincain Norbu, to be the rightful reincarnation of the Panchen Lama. This designation has been decried by the Dalai Lama and by many Tibetans.

The sculpture was part of an exhibition of works by Bahamian-born conceptual artist Tavares Strachan, entitled Always, Sometimes, Never. The Frye is Seattle’s only free art museum.

In the sculpture the Panchen Lama’s cardiovascular system is rendered in Pyrex, a clear form of glass, and immersed in a tank of mineral oil. Because Pyrex and mineral oil have the same refractive index, light passes through both materials at the same speed. This renders the figure, scaled to the size of an adolescent, visible from certain angles and invisible from others. 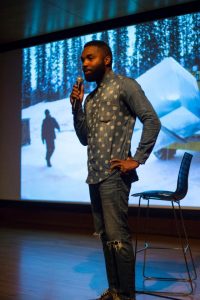 Artist Tavares Strachan, born in the Bahamas, often explores the nature of visible and invisible in his art.

The interplay of absence and presence—a recurring theme in Strachan’s practice—speaks not only to the boy’s disappearance, but to the larger erasure of a particular culture at the hands of another. Tibetan culture has been under attack by the Chinese government since 1959.

In his work Strachan explores aspects of science, art, and the environment to create works that are ambitious in scale and scope. Many of his projects investigate the nature of invisibility, calling into question conditions that frame and legitimize certain cultural knowledge and histories while obscuring and erasing others.

Always, Sometimes, Never placed his sculptures and collages within and alongside pools of water at the Frye, echoing the ways in which Seattle has been shaped geographically and culturally by its rainfall and waterways. By symbolically flooding the museum, Strachan brought submerged histories to the surface and transformed the gallery into a space of actual and conceptual reflection.

The pools that served as a setting for these works enhanced and distorted each piece, complicating viewers’ ability to see and discern. Water, as a mechanism of both flow and hindrance, is an apt symbol within Strachan’s larger project of scrutinizing how reality is perceived and defined. With each element, Always, Sometimes, Never points to what remains unseen, extending an invitation to dig deeper and explore what lies beyond what we already know. 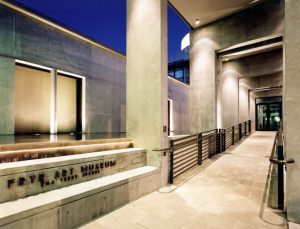 The Frye Museum welcomes people for free, to see its collection. 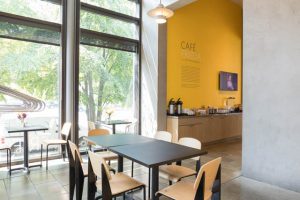 The Frye’s Café Frieda is a popular place to relax over a cup of tea or coffee.

The museum is best known for its collection of traditional art, but in recent years it has been showing more contemporary art.

Other historically overlooked figures were brought forward in a series of collaged portraits in Strachan’s exhibit. These included Queen Min (2016–17), the nineteenth-century Korean empress; Butch Morris (2015–16), the 20th-century musical innovator; and Tenzing Norgay (2015–16), the Tibetan mountaineer. Their biographies remain largely unknown, yet their cultural influence has been broad and complex.

Through his work Strachan aims to build and connect communities by making networks of power more visible, prompting us to reconsider their social roles at the local and global levels. The perceived authority of language is the subject of Us, We, Them (2015) and I Belong Here (2011), neon sculptures that question declarations of affiliation, locality, and identity. A Children’s History of Invisibility (2017) highlights topics often overlooked by society, creating an A-to-Z index of little-known histories.

Tavares Strachan was born in 1979 in Nassau, Bahamas. He received a BFA from the Rhode Island School of Design, where he studied glass, and an MFA in sculpture from Yale University. His focus on absence and presence led him to stage Seen/Unseen (2011), an exhibition of past and new work, in an undisclosed location never open to the public. In 2013 Strachan represented the Bahamas in the nation’s inaugural pavilion at the 55th Venice Biennale.