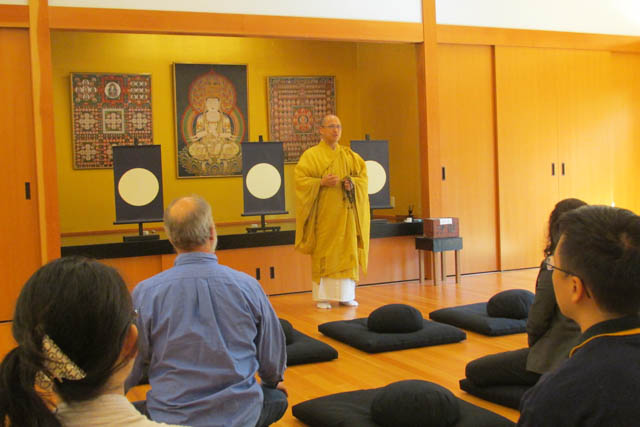 A unique group of Buddhist teachers and leaders met at Seattle Koyasan Buddhist Temple May 5 and swapped ideas and inspirations, not to mention delicious food.

The gathering was just the latest in what has become a 15-year tradition, of Northwest Dharma Association bringing together Buddhist teachers and leaders from around the region for day-long gatherings.

We meet each other as peers, learn about each other’s traditions, and share our experiences and our questions. Many who first met at the gatherings have gone on to collaborate on teachings, sangha events, and service projects.

Head priest Imanaka Taijo Sensei led us in an energetic Koyasan meditation at the May event, after we gathered at the 70-year-old Japanese vajrayana temple. He offered a glimpse of the history and activities of the temple which he has led since 2006, and also led a vigorous chant. 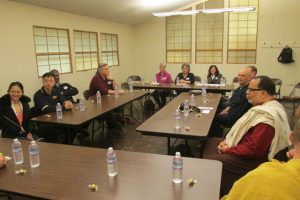 Representatives of several Western and Asian-origin dharma groups met together for the event.

Sensei’s apprentice Riaz Khan attended to the group’s needs all day. Khan is preparing for a trip to Koyasan, Japan, where he will be formally ordained.

After considering a range of topics identified at previous teachers’ gatherings, the May 5 group explored social service. We broke up into groups and talked about pitfalls, challenges and rewards. We shared about the many different ways of serving, and some of the many consequences, intended and unintended.

U.S. Navy Chaplain Lt. Sea Chan attended the meeting, and shared some of his experiences as one of the few Buddhist chaplains in the military.

Buddhist Global Relief’s Assistant Director Carla Prater invited us (and you!) to the Walk to Feed the Hungry fundraiser that will take place on September 15. You can learn more about this at in the NWDA online calendar.

For many years NWDA’s teachers and leaders gatherings took place annually on the first Saturday in October. We’re now inviting Buddhist groups to host gatherings any time of year.

If your Buddhist temple or center is interested in hosting a teacher’s gathering, please contact us at george@northwestdharma.org.