Buddhism is growing briskly in Spokane, especially at the city’s oldest temple, which sponsored a Buddhist convention earlier this year.

Up to 90 people attend weekly Sunday services at the Spokane Buddhist Temple, five times more than a decade ago. The temple supports three minister assistants, and invites visiting reverends from all over the West, who come to Spokane to give dharma talks. 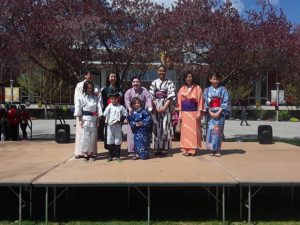 Bon Odori dancers, part of the church’s celebrations of Japanese culture, under the direction of Jacqui Pierce.

People are taking introduction to Buddhism classes, and are participating in fundraisers and social activities at the temple. Supervision comes from Rev. Katsuya Kusunoki, from the Seattle Betsuin Temple, which is in the same tradition, Shin Buddhism.

The Spokane growth is largely driven by new people, with a survey last year revealing that two thirds of sangha members have been with the temple for fewer than five years. Half were 45 years old or younger.

Top reasons they gave for attending the temple were for the fellowship, because they were seeking a new spiritual path, and they had a desire to learn the dharma. A few said that they came to learn about Japanese cultural traditions.

All this activity has brought the temple more visibility, and in February attracted the 71st Northwest District Buddhist Convention of Shin Buddhists. Sponsored by the Spokane Buddhist Temple, the “Coming Down The Mountain” weekend event brought in 220 people from Washington, Oregon, California, and even Canada.

Attendees participated in 12 dharma workshops given in English and Japanese by Northwest reverends and lay people, and also joined social activities.

The event was supported by 65 sangha volunteers.

The convention theme referred to the time when Shinran Shonin, the 13th century founder of the Shin Buddhist sect, came down from Mt. Hiei in Japan to spread the dharma.

“The theme for this year’s convention suggests that we should learn from the spiritual path of Shinran Shonin,” said Kodo Umezu, bishop of Buddhist Churches of America, at the convention. “After 20 years of intense monastic practice Shinran Shonin realized his inability to become free of bonno (afflictions), and came down from Mt. Hiei to search for spiritual guidance. These were his first steps toward the Nembutsu way. 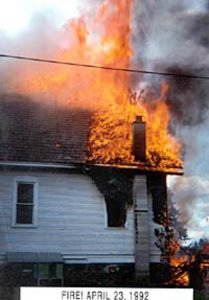 “This theme asks each of us to find out where we might be in our spiritual quest,” Umezu added. “It is our responsibility to discover the true meaning of our lives by turning to the teachings left for us to follow.”

The Spokane Buddhist Temple is the oldest Buddhist institution in what’s locally called the Inland Northwest, founded by Japanese-American families in 1945.

The sangha bought the Spokane property in 1965.  But when a 1992 fire destroyed the temple building, all that firefighters could save was the original shrine and Kansho bell.

Temple members rebuilt the church in 1994, and by 2014 they re-dedicated the building as a Jodo Shinshu Temple, a member of the Buddhist Churches of America.

My own path to temple membership was circuitous, in that I’m now following in the footsteps of my parents, years after they began studying Buddhism in their 70s.

My parents, Shirley and Jim Bennett, traveled to Thailand in June of 2004, and were introduced to Buddhism when their group toured Buddhist temples and visited Thai Buddhists in their homes. 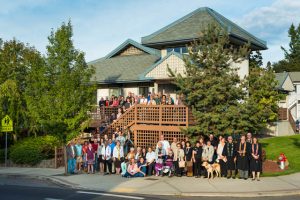 They were impressed with the peacefulness of the people they met there, and were curious about their faith. When they returned to Spokane they wanted to pursue their interest in Buddhism, but felt confident that there was no Buddhist community in conservative Eastern Washington.

My parents attended a weekend retreat entitled “Practicing No Practice,” led by Kenji Akahoshi, now resident minister of the San Diego Buddhist Temple. Then they started attending Sunday services, where they were welcomed into the temple sangha.

When my parents joined in 2004, only six to 12 people attended services at the temple. Attendance had declined from the 1950s, and with no resident Spokane minister, Rev. Don Castro came monthly from the Seattle Betsuin Temple. 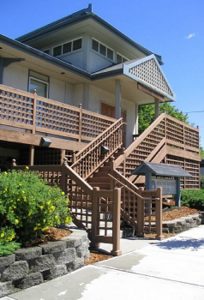 But the decline started to reverse as the temple became an all-inclusive, welcoming sangha, appreciating the participation of anyone interested in Buddhism.

Only a few of the current members were born into Buddhist families. Most came to Buddhism from other spiritual traditions.

I am a second-generation Shin Buddhist, raised as a Lutheran, who in 2009 joined the Spokane Buddhist Temple after having been an avid “book Buddhist.” Shin Buddhism has shown me how to be compassionate with others and with myself, has given me a home with others who share my beliefs, and continues to remind me that I am truly a foolish being.

0
SHARES
Share
Posted Under: 2018, Dharma Education, Summer
About the Author: Mari Haworth
Mari Haworth is a member of the Spokane Buddhist Temple Religious Education Committee, and serves on the temple’s board. She is a drummer in Spokane Taiko, and a mother, grandmother and retired researcher.