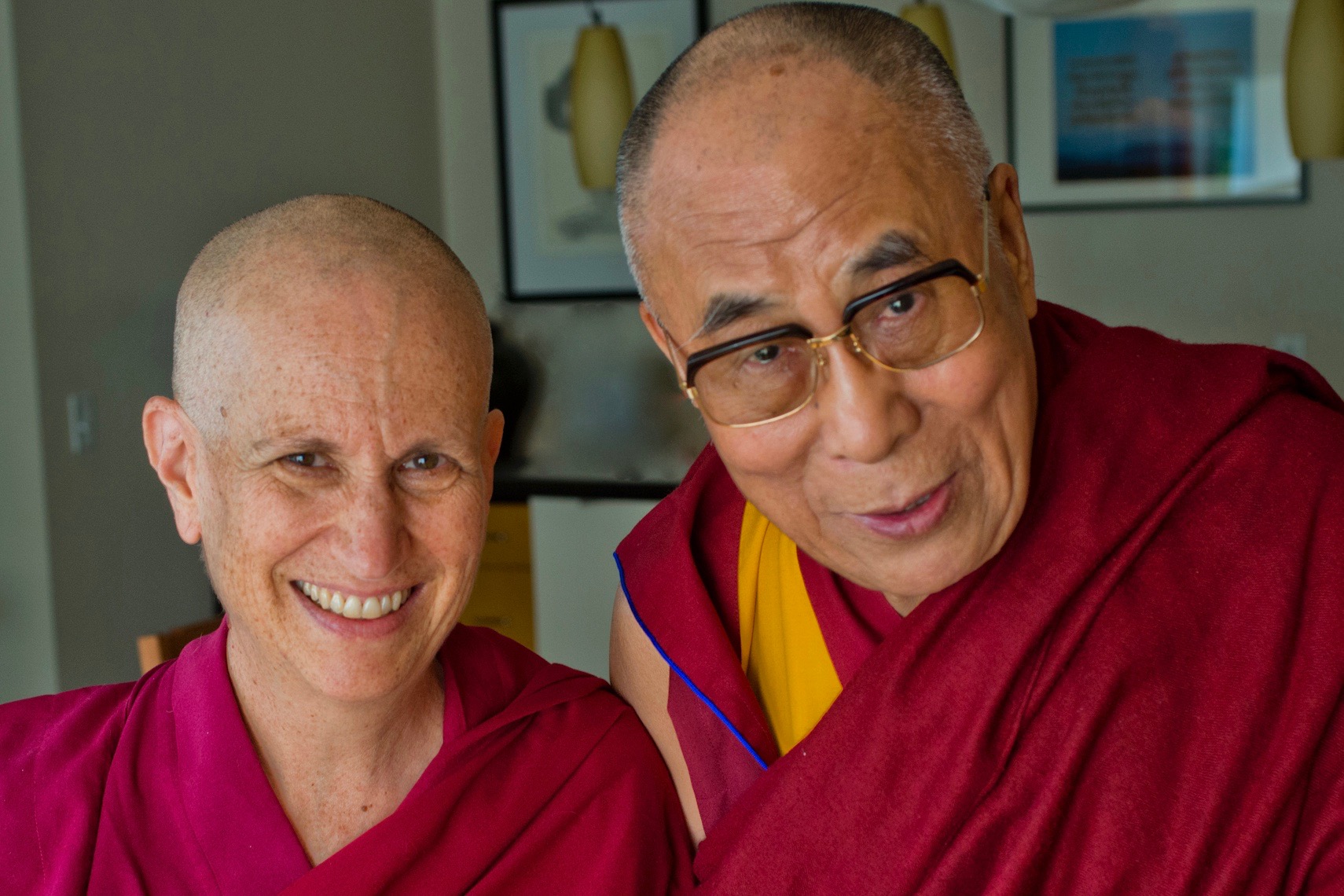 In 2013 His Holiness the Dalai Lama met in Portland with student and co-author Venerable Thubten Chodron, to discuss The Library of Wisdom and Compassion series. Photos: Courtesy of Sravasti Abbey and Wisdom Publications

His Holiness the 14th Dalai Lama, and Pacific Northwest author and Buddhist nun Venerable Thubten Chodron, have jointly released a second volume in the Dalai Lama’s definitive and comprehensive series of teachings on the entire Buddhist path, The Library of Wisdom and Compassion.

The second volume “The Foundation of Buddhist Practice,” released by Wisdom Publications May 15, lays out the steps to building a strong Buddhist practice. 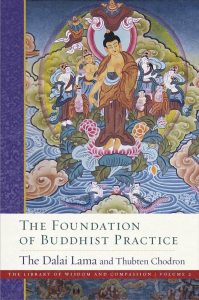 Volume two of the Library of Wisdom and Compassion series, “The Foundation of Buddhist Practice,” was recently released.

The Library of Wisdom Compassion series promises to be one of the Dalai Lama’s most significant English-language works. Eight or more volumes in length, the series brings together decades of the Dalai Lama’s oral commentaries on every step of the gradual path to awakening.

The series is conceived, compiled and edited by his longtime student and co-author, Venerable Thubten Chodron. She is also the founder and abbess of Sravasti Abbey, a Buddhist monastery in Newport, Washington, north of Spokane.

The series publication is the fruit of more than 25 years of effort on her part to bring these teachings to English readers. The first volume, “Approaching the Buddhist Path,” came out in 2017. Wisdom Publications expects to publish a volume every nine months over the next several years.

His Holiness the Dalai Lama needs no introduction. As the spiritual leader of Tibet he was trained in the rigorous Tibetan monastic tradition and has taught Buddhism for nearly 70 years.  The Library of Wisdom and Compassion series is a vehicle for His Holiness to share with Western readers a lifetime of insights and experiences in Buddhism.

American-born Venerable Chodron has studied with His Holiness and other Tibetan masters for more than 40 years. She herself has written or edited more than 30 books on Buddhism, and teaches worldwide.

With The Library of Wisdom and Compassion series, His Holiness and Venerable Chodron seek to break new ground in the presentation of Buddhism’s far-ranging topics.

“Classical presentations of the path in Tibetan Buddhism assume the audience already has an understanding and faith in Buddhist concepts such as rebirth and karma,” Venerable Chodron said. “His Holiness realized early on that a different approach was needed for his non-Tibetan students.” 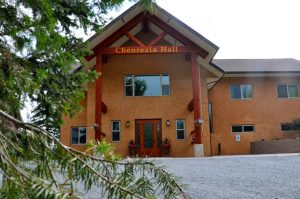 Venerable Chodron recalls the early days when Western students first encountered Tibetan Buddhism shortly after His Holiness and thousands of Tibetans fled the Chinese Communist occupation of their country.

“In the 1960s and ‘70s very few texts were available in English, so we relied on our teachers’ oral instructions,” she said. “Mostly they taught from the lamrim—the gradual path to awakening—texts. The teachings were wonderful, but the stories and analogies they used to illustrate dharma points came from Tibetan culture. Sometimes we Western students could only scratch our heads. What in the world did they mean?”

Of course over years of diligent study and practice those early Western students absorbed the meaning of those teachings. They became the organizers and translators who brought Tibetan teachers to North America, Europe and Australia, and who later became teachers themselves.

Contemporary Tibetan Buddhists owe much to that first generation of Western dharma pioneers for the wealth of Buddhist teachings we have in English today. But to this day, the lamrim presentations follow the same outline used in the Tibetan culture for 1,000 years.

In 1992, when Venerable Chodron was resident teacher at Dharma Friendship Foundation in Seattle, she had an idea.

“I thought it would be nice if His Holiness wrote a comparatively short text that Tibetan teachers could use as a root text when they taught lamrim,” she said. “It would include preliminary material about rebirth, the nature of the mind, and other introductory topics to help non-Tibetan people understand the basic premises of the gradual path teachings.” 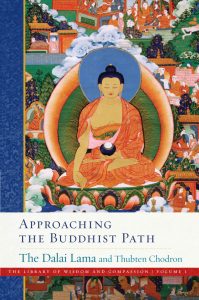 The first volume of the Library of Wisdom and Compassion series, “Approaching the Buddhist Path.”

Venerable Chodron requested an appointment with His Holiness in 1992 and finally was able to present her idea in 1995. His Holiness liked it! He directed Venerable Chodron to compile transcripts from his teachings and assigned highly regarded Tibetan scholars, teachers, and translators to help her.

The “short book” Venerable Chodron had originally proposed grew into multiple publications, including “Buddhism: One Teacher, Many Traditions”—which compares tenets and practices in Theravada, various Chinese traditions, and Tibetan Buddhism—as well as the many volumes of The Library of Wisdom and Compassion.

“His Holiness is so practical in his teachings,” Ven. Chodron said. “He respects Western education and understands that Western audiences will respond to Buddhism’s emphasis on analysis and reasoning.

“For example when His Holiness teaches in the West, he jumps right into Buddhist philosophical topics—the two truths, the four truths, the four seals. He wants Western students to develop a correct understanding of the Buddhist view from the outset. So that’s what ‘Approaching the Buddhist Path,’ the first volume in the series, addresses.”

Topics in the first volume include the Buddhist view, Buddhist history, and an extensive exploration of mind and emotions. It reads well as a stand-alone introduction to Buddhism, and also lays the foundation for all the teachings that follow.

In Volume two, “The Foundation of Buddhist Practice,” His Holiness speaks to some of the more challenging topics for Western students. The book begins by explaining what makes a philosophy Buddhist or non-Buddhist, and then teaches how to tell whether our knowledge and perception is reliable, so we have the tools to understand the nature of reality. It includes in-depth discussions of the relationship between spiritual mentor and student.

“In the West the issue of choosing and relating to spiritual mentors is a thorny one that people often misunderstand. That confusion can bring a lot of trouble and it interferes with people’s practice,” Venerable Chodron said. “Therefore the book talks about choosing spiritual mentors and also how to become a qualified disciple. Then, once we have chosen someone as a spiritual mentor—and we can have many—how do we relate to him or her? His Holiness is quite clear and practical on this.” 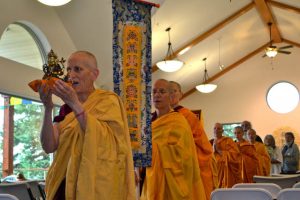 Ven. Thubten Chodron leading a procession of monastics during the 2014 consecration of Chenrezig Hall.

Additional topics covered in “The Foundation of Buddhist Practice” include how to structure a meditation session, as well as complex issues around dying and rebirth. It also gives an extensive and fruitful explanation of karma and its results.

Each volume in the series includes meditative reflections that help readers review and think about key points in the teachings, encouraging them to personalize what they read and integrate the ideas into their daily lives.

In his prologue to the first volume, His Holiness notes, “The world we live in is very different from the world at the Buddha’s time, yet we human beings have the same afflictions and still experience physical and mental suffering. While the truth of the Buddha’s teachings transcends historical eras, the way they are presented to practitioners in a given time is influenced by the specific culture, environment, and economic and political challenges.

“I encourage us to become 21st-century Buddhists—people whose view is rooted in the Buddha’s message of compassion and wisdom and who also have a broad understanding of many fields, such as science—especially neurology, psychology and physics—and other religions.”

His Holiness and Venerable Chodron expect The Library of Compassion and Wisdom to help 21st-century Buddhists flourish in their practice, thereby bringing the qualities of wisdom and compassion into the larger world.