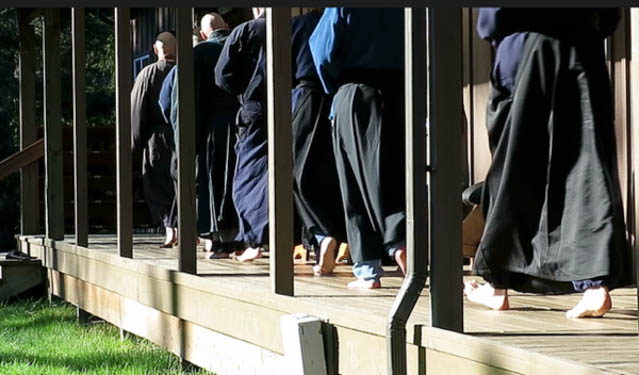 The leaders of the Tahoma-san Sōgen-ji Zen Monastery, on Washington state’s Whidbey Island north of Seattle, are taking steps to keep the monastery healthy for the next 1,000 years.

We’re planting of trees and building facilities to last a millennium. We’re also deepening the teaching and practice of realizing directly our original nature, at this traditional Rinzai Zen Training Monastery. 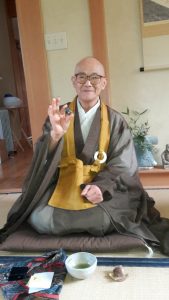 Harada Roshi in his tea house, holding a rock offered by a student.

The first of the important physical developments is the 77 Trees Project, commemorating founder Shodo Harada Roshi’s turning 77 in 2017. The second is the columbarium project, a building with niches where the ashes of deceased sangha members and others will be stored and honored.

On the dharma practice side we are offering more frequent intensive meditation trainings. Shodo Harada Roshi now travels from Japan to the monastery three times yearly, in February, May, and September. While in Washington he offers seven-day intensive practice periods called sesshins, and five-day less-intensive kosesshins.

Harada Roshi also is abbot of Sōgen-ji, a 300-year-old temple in Okayama, Japan.

Embodying Harada Roshi’s teachings is Daichi Zenni, a woman whom Roshi in 2011 appointed co-abbot of Tahoma monastery, and who is now coming from Japan more often to lead five-day sesshins between Harada Roshi’s visits. He also authorized her to offer sanzen, one-on-one student teachings, thus empowering her to complement his own intensive teaching schedule around the world. 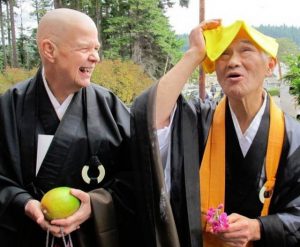 Harada Roshi joking with Daichi Zenni – the co-abbot of Tahoma One Drop.

Daichi Roshi is one of the first American women with  43 years of Zen training in Japan, first under Mumon Roshi, Harada Roshi’s own teacher, and then under Harada Roshi himself. Yamada Taishitsu Mumon Roshi was head of Myoshinji Temple in Kyoto until his death in 1988. His boundless brightness is our guiding light.

The project is to transform the aging forest of alder trees around the Tahoma monastery into an edible permaculture forest. 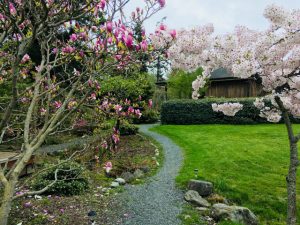 Tahoma Monastery, and its buildings, gardens and lakes, were designed along traditional Japanese lines.

Roshi often teaches us to cultivate a 1,000-year view, and the land around Tahoma Zen monastery has a weak ecology after multiple clear cuttings over decades. Many of the forest’s alder trees are reaching the end of their days, and through this project we will replace them to create a more balanced forest to sustain future generations of practitioners.

The importance of planting trees was commemorated more than 1,000 years ago, in this exchange by Zen Master Rinzai, also called Linji, who was the Chinese founder of the Zen school.

When Linji was planting pine trees, his teacher Huangbo asked, “What’s the good of planting so many trees in the deep mountains?” Linji replied: “First, I want to make a natural setting for the main gate. Second, I want to make a landmark for later generations,” thumping the ground with his mattock three times. 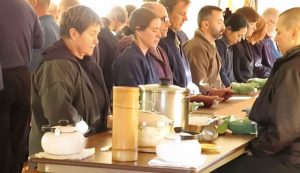 Working together, enacting a 1,000-year-view over 1,000 days, we are planting trees to celebrate what we’ve received from the past and what we pass to the future. Seventy-seven trees is a large number and we are not able to plant them in a single season, given that we need to prepare the forest and to organize the work. Giving ourselves 1,000 days to transform an aging alder forest into a vibrant food forest allows us time to integrate the work into our practice.

Over the years we’ve also planted an orchard of dwarf fruit trees as part of the garden, and have begun to re-plant the various meadows between the buildings. 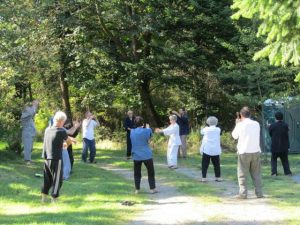 We are launching this 77 Trees Project in the area surrounding the upcoming columbarium. Over the years many memorial trees have been planted at Tahoma in recognition of sangha members or people in the community who have passed away.

Rather than continue to plant more scattered trees, Roshi wants us to create a beautiful columbarium, which means place where doves rest. This site will include a garden, where people can come to rest, meditate, and reflect on their loved ones. It will have sections for ashes to be stored for those who wish to have their remains in this burial place.

Getting to this point of developing long-term infrastructure is a result of loving donations, and good will from thousands of practitioners around the world who support roshi’s vision.

When we  founded One Drop Zendo Association in 1990 we had no place of our own, but instead held retreats at several Washington state sites including Cloud Mountain Retreat Center, on Vashon Island west of Seattle, and at Bastyr University north of Seattle. After looking around the U.S. West for property, we bought this beautiful land on Whidbey Island in 1996. 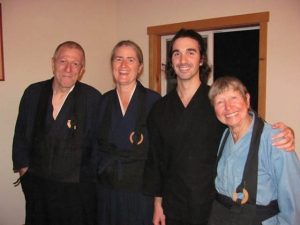 Working staff Tanzan, Sokei, Marco and Jokai – the wonderful Jisharyo team – who help in the zendo.

Connected with Tahoma Zen Monastery is our cousin next door, Enso House, a Zen hospice for end of life care. Also founded by Harada Roshi, Enso House cares for people who are dying one at a time, and supports their spiritual deepening at the end of life.

A related focus is supporting those who are caring for friends and family who are sick or dying. Enso House and Tahoma Monastery work together to support caregivers by offering them free daylong respite retreats at Tahoma Monastery. Enso House volunteers and Tahoma residents provide a free lunch, meditation, and relaxing therapeutic afternoon activity, for anyone who needs a break from caregiving.

54
SHARES
Share
Posted Under: 2018, Sangha News, Summer
About the Author: Sokei Leon
Sokei Leon visited Sogenji Monastery in Japan in 1989 when she was 23. She started sitting with Harada Roshi and Daichi Zenni then, and kept going. Leon is sesshin coordinator and outreach coordinator at Tahoma Zen Monastery. She lives with her husband, a monk she met in Japan, down the road.