I first started writing prisoners about 10 years ago, because it seemed a natural extension of practice.

Over the years I’ve corresponded with perhaps four or five prisoners. I’ve learned people in prison are no different than you or I, they just want to be happy. They have the same potential to transform their situation and to go on to make the world a better place. And they are largely forgotten by society.

“All of the Buddhists I have corresponded with have helped me to have a better understanding of the Dharma,” said an inmate at Monroe Correctional Complex in Washington state. “They have shown me there truly are people in this world who care about all sentient beings, even those of us in prison.” 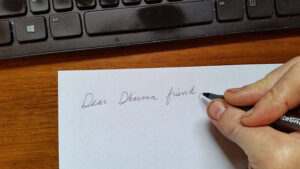 The written word, by pen or keyboard, can bring solace and support to someone in prison.

At least 10.3 million men, women, and children are in prison worldwide, with the U.S. accounting for 22 percent of them. Incarcerated individuals who discover the Buddha’s teachings, who connect with Buddhist organizations that offer them correspondence, books and visitation, often establish a connection that turns their life around.

It’s easy to make an impact on someone’s life through prison correspondence.  Sometimes I answer straightforward Dharma questions, using examples of my own experience. Sometimes I write as if I was writing to a friend, offering encouragement and small talk about hiking, just to build the relationship.

One challenge is to make a personal connection without becoming emotionally entangled, or feeling a need to rescue, so usually I re-read my letters and make sure I strike the right balance.  I hear about their hopes and fears, their frustrations, and get glimpses of the miscarriages of justice that can happen in the criminal justice system.

Venerable Thubten Chodron, abbot of Sravasti Abbey in Washington state, ten years ago asked me if I was interested in corresponding with prisoners.  It seemed a natural extension of Mahayana Buddhism, with its determination to dedicate not merely to our own liberation, but to the complete awakening of all sentient beings. 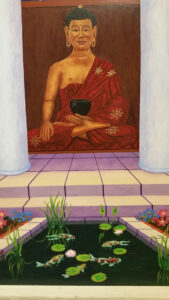 A painting of the Buddha, done by a practicing prison inmate.

Prison is a very lonely place, and many of the inmates have been abandoned by their families. Developing healthy spiritual friendships in prison is a difficult proposition at best, with many of the other inmates continuing to reminisce about alcohol, drugs or harmful behaviors. Gang culture is the accepted norm within prisons, a formidable obstacle to cultivating attitudes such as love, compassion and equanimity.

You learn a lot about setting good boundaries in making connections with prisoners. The most difficult part of this practice is maintaining a steady and realistic engaged compassion, with no expectation of seeing results. All I can do is plant karmic seeds, offer friendly Dharma encouragement based on my limited realization of Dharma principles. They have to do the practice and make the changes.

I’m not sure what difference I’ve made. That’s really up to them.  In one case correspondence led to meeting a prisoner still in prison, a relationship that is still developing.

Venerable Chodron began writing to prisoners in 1997, after an inmate wrote to her asking for Dharma materials and advice. Since then she and the monastics at Sravasti Abbey have written to prisoners in 43 states and several countries. Currently they’re working with nearly 1200 inmates.

“This work matters to me because I have seen profound changes in thinking and behavior in inmates who study and practice Buddhism,” said Venerable Thubten Jigme, a Sravasti Abbey nun. “It is especially evident in those sentenced to life in prison without parole. They are such dedicated practitioners and influence those around them in very positive ways.

The prison facility at Monroe, Washington

“I have learned much about fortitude from inmates. Their conditions for practice are horrible,” she said. “Many times the authorities come into cells and looking for contraband and drugs, and Dharma books and study material are taken and not returned.”

“Some inmates describe living in a 200-bed dorm, meditating on their top bunk with a bare light bulb above them, with the room filled with music, yelling, fighting, and yet they are able to focus on their meditation,” she said. “These are very accomplished meditators who have transformed their minds and hearts due to the Dharma.”

Venerable Chodron offers these guidelines for writing to prisoners: Our purpose in writing to inmates to help them learn and practice Dharma. Sharing our own personal Dharma experiences can be helpful, but only if it is about past situations where we used the Dharma to find peace or resolution. Keep your correspondence on Dharma topics.

Do not share our own personal stories or information, especially about issues in your personal lives that you are now working on. Inmates may sometimes ask for money or legal help, or want you to telephone them or a family member. Remember we only offer Dharma support.

Respond with compassion, but do not think you have to fix their problems. If you find yourself getting emotionally involved with an inmate, tell us immediately so we can find someone to take your place. It helps neither you nor the inmate if you develop an emotional relationship.

Use a post office box as a return address, and don’t give out your home address or telephone number. Write only when responding to a letter from the inmate. Do not write again until you receive another letter from them. Do not send Dharma books, tapes, DVDs, CDs or magazines until you know the particular prison’s rules.

There are few, if any, Buddhist books in many prison libraries in the U.S.  Most prisons only allow books direct from the publisher. Don’t send books that have your notes in them. What you can send depends on the inmate’s level of security. When you send books it helps to write “Religious Educational Material” on the outside of the package. Best to send one or at the most two books at a time, not more.

For your letters use only plain stationery, no more than five sheets, and with no staples or paper clips.

If an inmate says something inappropriate in a letter, either stop the correspondence immediately, or if you’re comfortable enough to call them on what they said, point out that it’s inappropriate and tell them if they want to continue corresponding they must not do that again. They need and appreciate straightforward communication.

The Liberation Prison Project, established by Venerable Robina Courtin in 1996, responds to nearly 1,000 letters a month from inmates, mainly in the U.S. and Australia. The project accepts applications from people wishing to correspond with prisoners. Write to infoUSA@liberationprisonproject.org.

I’ve just enrolled in an online class run by the Prison Mindfulness Institute. Several of my teachers, including Venerable Chodron, Joseph Goldstein and  Sharon Salzburg, are on the board of advisors. It’s a great outfit, and I know this is going to give me more tools to help me understand how to more effectively work with prisoners.

1
SHARES
Share
Posted Under: 2017, Prison Dharma, Summer
About the Author: Jordan Van Voast
Jordan Van Voast is an acupuncturist in Seattle and president of Dharma Friendship Foundation. He leads meditation classes for individuals on parole at the Community Center for Alternative Programs in Seattle, and writes to prisoners.