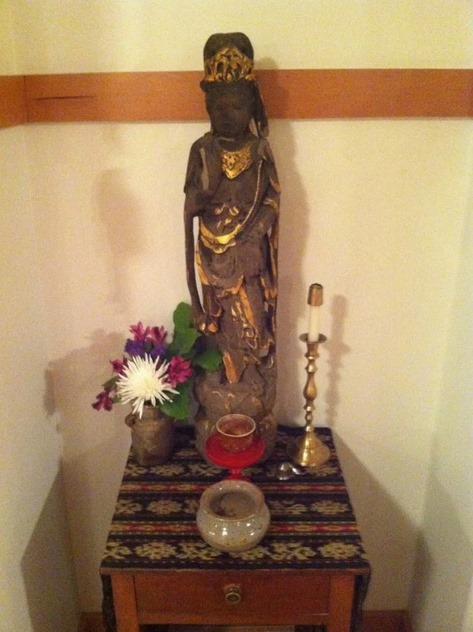 A Helping Hand
by Sally ZenKa Metcalf
When our temple’s founding abbot, Genki Roshi, first came to this country, he made a living at Japanese gardening. A family hired him to put in a new ground cover beneath their trees. He began to dig, and clink! His shovel struck something unusual. He uncovered it to find a statue of Kannon Bodhisattva buried in the garden. No one knew how the statue got there. Was it hidden by a Japanese-American about to be sent to an internment camp in WWII? It’s unknown. The property owners gave it to Roshi for his fledgling Zen temple, Chobo-Ji.
I heard a wonderful story about Kannon recently. Originally, in India, Kannon Bodhisattva was Avalokitesvara the Bodhisattva of Compassion, one of the Buddha’s principle disciples. It is he we chant about daily in the Heart Sutra. Probably because of pronunciation difficulties, in China, this same Bodhisattva is named Quan Yin, in Tibet Chenrezig, in Japan Kannon. Curiously, as this Bodhisattva migrated eastward, it became evermore feminine in appearance. My friend recently called Kannon Bodhisattva gender-fluid. I love it!
It is said that Avalokitesvara became so attuned to the cries of those who suffer that he felt his head might explode with longing to free them. The other Bodhisattvas gathered together to help him. One made him ten thousand golden arms to save the world. (Some scriptures say 1000 arms, some say 100,000!) Every hand had an eye in the palm to see just what was needed in each situation. Another Bodhisattva made him ten thousand tools, one for each hand, helpful tools such as a vial of medicine, a sword, a lotus flower. Some of the tools detailed on sculptures are now unrecognizable. Perhaps, like typewriter erasers, they lost their purpose centuries ago. Maybe today, the Bodhisattva of Compassion has a handy car jack, a smart phone, or some AA batteries.
When I was in Kyoto, I stumbled upon a little, open-air temple, wood dark with age. Inside were displayed 1000 small carved plaques. Each depicted a hand holding a Bodhisattva tool. I can’t imagine how long it took the monks to carve them all!
The last Bodhisattva made Avalokitesvara eleven heads he could select from, each with a different face. Online, you can see ancient statues with these faces piled atop Quan Yin’s head. Some of us, when suffering, feel safe with a helper who looks like a motherly old lady such as me, while others need a square-jawed guy with an eagle eye. Traditionally, one head is an animal—often a horse. When troubled, many of us turn to animals for comfort.
I read about a woman who has a horse farm just north of here in Snohomish County. She offers equine therapy to soldiers with PTSD. A specific horse is assigned to a particular person. The caregiver rides only if they’re so inclined. They are asked to feed, water and brush the horse, and to clean its stall. They can take it into the arena or out trail riding, or just sit with their horse in the quiet barn and read a book—whatever they like. In the soldiers’ testimonials, they credited their trusty old quarter horse, or little Arab mare with saving their lives.
Why am I telling the story of Avalokitesvara? We might see it as a quaint myth with no relation to ourselves. Especially if we’re not Buddhists.
There are many voices in the world calling for help. It can be hard to know what to do. Yet in this Pandemic, so many, like the horse therapist, are finding ways, great and small, to help others. Gradually, we may discover that, together, we ARE the countless arms of the Bodhisattva of Compassion, seven billion strong, reaching out to connect, to care, to lend a hand, or to offer something useful such as a handy tool, some garden-fresh tomatoes, or a Covid test.
When we stretch out our fingers to help another, right in the heart of our palm is an eye that perceives just what’s needed. We, being the unique people we are, may have what makes all the difference in that moment, for that person—the gift that lightens their suffering and helps them know someone truly cares.
We may also discover that the hand we reach out to help is, itself, shining. And in that palm is a kindly eye seeing directly into our own heart. So, in hoping to heal, we ourselves are healed. Together, we become the One who wears many faces. Each face, each hand reaching out to connect, gives us another chance at the gift of Love.
Edited excerpt from Sally ZenKa’s Dharma talk at her Sensei Ceremony
Much Love!
0
SHARES
Share
Posted Under: 2020, Compassionate Action, Featured On Home Page, Mahasangha