Tibetan Buddhist film festival to be held
in downtown Duvall, (King County, WA)
Sat, June 9 . . . all invited, free admission!
Film is an effective medium in which to communicate
ideas both engaging and informative, and it is to this
end that we at the Chenrezig Project, are hosting the
first Snoqualmie Dharma Film Festival, being held at
the Duvall Visitor Center on Saturday, June 9 from
1:00-9:30pm.
The Festival provides (interested and/or curious) local
audiences with an opportunity to discover films that
communicate and share the beauty of Tibetan
Buddhist culture, spirituality and sensibilities — ideas
and methods that many find meaningful regardless of
faith, philosophies or religion.
This is a free event, a gift to the community;
there is no charge to view any or all of the four
films being screened. 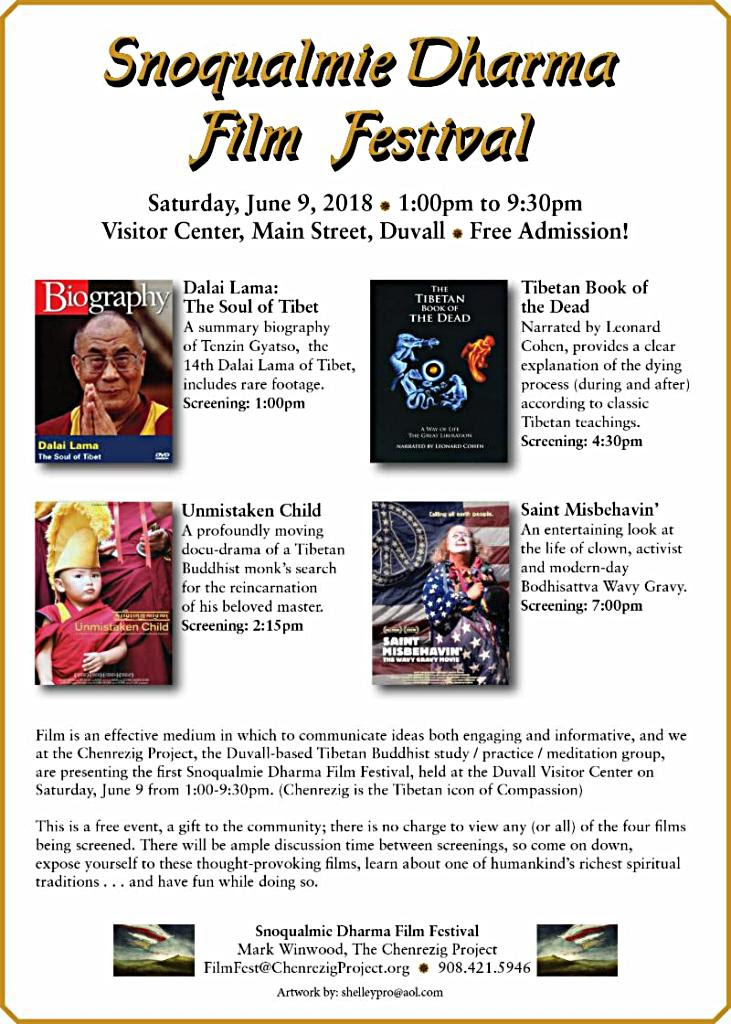 We believe there is a simple, universal message of
wisdom and compassion in Buddhism that can benefit
everyone, regardless of faith or background.
We provide a safe atmosphere for people to gather,
listen, discuss and learn these ancient, meaningful
teachings.
The Films . . .
We’ll kick off the screenings at 1:00pm on June 9th
with a biography of the 14th Dalai Lama titled
Dalai Lama: The Soul of Tibet (an A&E production).
At 2:15pm we’ll be screening Unmistaken Child – a
profoundly moving documentary of a Tibetan
Buddhist monk’s search for the reincarnation of
his beloved master.
At 4:30pm we’ll be sharing Tibetan Book of the
Dead: The Great Liberation — narrated by Leonard
Cohen, a short film providing a remarkably clear
explanation of the dying process (during and after)
we’ll all encounter according to classic Tibetan
teachings.
After a dinner break, we’ll reconvene at 7:00pm
for the day’s final film, Saint Misbehavin’ (aka
The Wavy Gravy Movie) providing an entertaining
— and inspiring — trip through the extraordinary
life of poet, clown, activist and modern-day
Western Bodhisattva Wavy Gravy.
There will be ample discussion time between
screenings, so come on down, expose yourself
to these thought-provoking films, learn about
one of humankind’s richest spiritual traditions,
and have fun while doing so.
(Mark your calendars . . . bring a friend and/
or make new ones.)
Please click here for a larger, downloadable
version of the above Festival flyer.
Questions? E-mail to
FilmFest@chenrezigproject.org
0
SHARES
Share
Posted Under: 2018, Dharma Education, Featured On Home Page