The NWDA
Calendar of Events

This is a listing of Buddhist retreats, talks, ceremonies, classes and other special events. You can search for events by date, location, and other search criteria.

If you are a member group, wanting to post an event, please go to the member group page and log in. 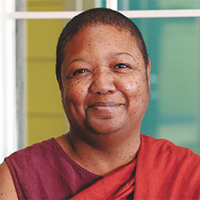 Ven. Dr. Pannavati, a former Christian pastor, is co-founder and co-Abbot of Embracing-Simplicity Hermitage in Hendersonville, NC. A black, female Buddhist monk ordained in the Theravada and Mahayana traditions with Vajrayana empowerments and transmission from Roshi Bernie Glassman of Zen Peacemakers, she is both contemplative and empowered for compassionate service.

An international teacher, she advocates on behalf of disempowered women and youth globally, and insists on equality and respect in Buddhist life for both female monastics and lay sangha. She was a 2008 recipient of the Outstanding Buddhist Women’s Award.

In 2009, she received a special commendation from the Princess of Thailand for Humanitarian Acts and she ordained Thai Bhikkhunis, on Thai soil with Thai monks as witnesses.

In May 2010 she convened a platform of Bhikkhunis to ordain the first 10 Cambodian Samaneris in a Cambodian temple, witnessed by Cambodian abbots including Maha Thera Ven. Dhammathero Sao Khon, President of the Community of Khmer Buddhist Monks of the USA.

Ven. Pannavati continues to visit Thailand each year, ordaining, training, offering support for the nuns and assisting in their projects.  In 2013 she arranged for 500 books to be sent to both elementary and secondary schools in Rayong.  She is also raising funds to improve security at the compounds, as this is an utmost concern in some areas of Thailand.

Venerable is a founding circle director of Sisters of Compassionate Wisdom, a 21st century trans-lineage Buddhist Order and Sisterhood formed by Ani Drubgyuma in 2006.

In 2011, Venerable adopted 10 “untouchable” villages in India, vowing to help them establish an egalitarian community based on Buddhist principles of conduct and livelihood, providing wells, books, teachers and micro-loans for women.