The day included singing the United States national anthem, a talk by monastery Abbess Jian Yan, a vegetarian buffet dinner, performances by members and friends of Buddha Jewel Monastery, a Lamp Offering to the Buddha, and ringing of a ceremonial bell. 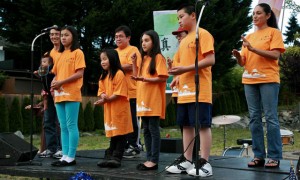 As the U.S. flag waved next to the Buddhist flag, Master Jian Yan spoke of gratitude to our country for providing us many freedoms including studying Buddhism, and gratitude for the donations and volunteers to help make the celebration happen. She also expressed gratitude to our parents, to our founding abbot Grand Master Wei Chueh for his compassion, and of course to Buddha for all his wisdom.

The abbess started the ceremony with these words:

“Buddhism is about passing along and learning from the teachings of the Buddha.  Our lineage comes from our founding abbot Grand Master Wei Chueh.

“Grand Master modernized the format of Buddhist teaching to fit the practical modern-day life. He has brought the joy of the dharma to so many that he has been asked to establish over 100 Chan (Zen) centers around the world, including eight centers in the U.S.  Buddha Jewel Monastery is one of these eight …After much planning and fund raising Buddha Jewel Monastery opened its doors in September 2008. 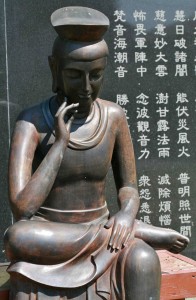 “The theme of tonight’s celebration performance is respect, kindness, harmony, truthfulness, and gratitude.

This echoes the four tenets of Chung Tai:

To our elders be respectful

To our juniors be kind,

To all humanity be harmonious

In all endeavors be true.”

During the Lamp Offering (this entails bowing and placing a lit candle on an altar before the Buddha) the following was recited:

“With most sincere and respectful minds, let us make offerings to the Buddhas of the past, present, and future of all the worlds, vow to learn the great wisdom of the Buddha, illuminate the light of our own mind, and shatter the mind’s ignorance and darkness.

Kindle the light before the Buddha,

Extinguish the burning in our hearts.

I vow to attain perfect wisdom, to shine on all that is dark.” 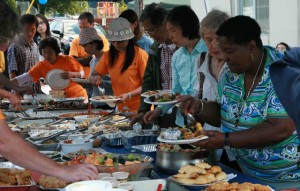 During the bell striking the following was recited:

“May this sound reach all dharma realms,

Penetrating the iron gates of gloom.

With pure hearing one attains perfection,

Leading all sentient beings to enlightenment.”

Buddha Jewel Monastery is a branch monastery of Chung Tai Chan Monastery, located in central Taiwan.  Chung Tai opened in 2001 after three years of planning and seven years of construction.  It is a magnificent monastery and a highlight of any visit to Taiwan.

Chung Tai was established by Venerable Master Wei Chueh, who was ordained in 1964 after studying under a Buddhist master in Taiwan.  Master Wei Chueh lived and studied alone in a hut in the mountains of Taiwan for 10 years, until disciples sought him out to establish a monastery.  When this monastery became too small to accommodate all who sought his teaching he began the planning on Chung Tai.

People lined up to strike the auspicious bell and wish for world peace.

Buddha Jewel Monastery held its “Opening Purification Ceremony” in October 2012, when Venerable Master Jian Deng, the present abbot of Chung Tai Chan Monastery, came to preside over the ceremony and to conduct the purification.  While Buddha Jewel had been open since 2008, the ceremony was an important formality for the monastery.

Since opening in the fall of 2008, Buddha Jewel has been offering meditation and Buddhism classes in both English and Mandarin.  Offerings include children’s class, a beginning adult class, and a sutra study class. 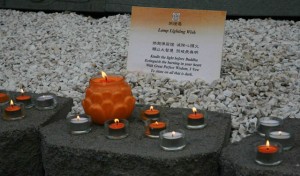 Lamp offering to the Buddha.

In addition to classes there are many monthly events including traditional Buddhist ceremonies, community service, meditation retreats, vegetarian cooking classes, and workshops.

All events are free.  The monastery is funded by donations from members and others.

The focus of teachings at Buddha Jewel Monastery is Chinese Zen Buddhism, a form of Mahayana Buddhism.  Mahayana Buddhism not only focuses on working towards individual enlightenment, but also on helping others reach this goal.